We were awake in Dayton shortly after 6:00 AM but I spent a little more time reading Tempest at Dawn. The dramatization of the US Constitutional Convention of 1787 and the interplay among the various historical characters and factions. Anyone interested in the Constitution and how it came to be should give this book a read.

As we were checking out, someone asked what year the Avalanche was. It was an '08 but he thought it was new. I guess I just have good taste in choosing colours that don't show dirt and marks. We stopped at a new McDonald's for breakfast to go, and then struck out on I-70 West around 8:30 bound for the Wonka domicile in Murphysboro, Illinois. The construction on 70 ended before very long. I did note gas here was $2.29 per gallon, compared to $1.99 up in Findlay.

The political XM radio stations were remembering 9/11. It is hard to believe it has been fourteen years since that dark day. Soon, we crossed into Indiana and the Interstate became the Tony Hulman Memorial Way. It was refreshing to see a highway that wasn't named for a politician. 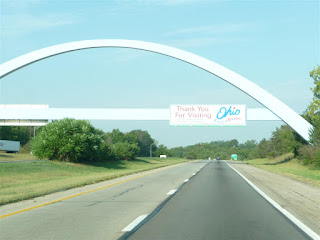 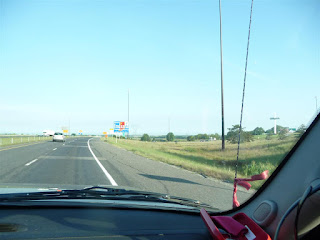 Indiana makes me think of Robert Heinlein's story The Green Hills Of Earth. We could see bands of clouds ahead that suggested we would be driving into some weather. The Zumo tried to route us through Indianapolis on I-70 but I took our usual detour south on I-465. As we connected with 70 on the other side of Indy, it started to rain and continued off and on.

It wasn't raining when we stopped at the Plainfield Rest Area for a bathroom break. The cages around the vending machines amused me. I visualized monkeys reaching through the bars of their cages looking for treats. Just as we got back in the truck, the rain started teeming down. 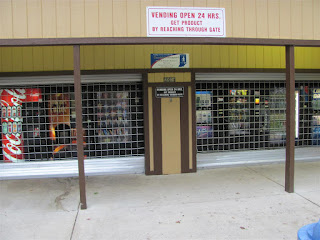 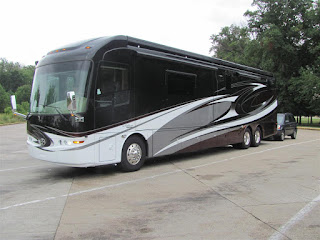 How the other half lives

Approaching Terre Haute, there was a billboard advertising a hospital emergency room. The electronic numbers bragged that the current wait time was 20 minutes and, if we were injured or having chest pains, we should come and see them. What a difference from back home.

When we crossed the Illinois line, I was pleasantly surprised to find that the new Garmin 660 actually recognized that it was in a different time zone and changed itself automatically. I always wondered why the 550 wasn't capable of this simple task, considering that it knows the satellite time and its location. A nice feature. 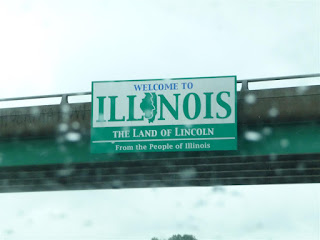 Welcome to the Land of Lincoln

In Marshall, Illinois, we stopped for fuel at a Petro truck stop right next to the Interstate, where gas was priced at $2.25. The Phillips and Marathon stations on the other side of the highway were both priced at $2.45. I have no idea how they could still be in business.

We also went into the adjacent McDonald's where I phoned VISA. Kim had called to say that they processed both invoices for our upcoming Disney vacation (ours and theirs) against my US credit card, but theirs had been declined. After a wait, a very friendly lady told me that the charge was placed on hold due to its size and unusual nature. She released it and I left Kim a voicemail to have them process the charge again. We got lunch to go and headed out on our way. 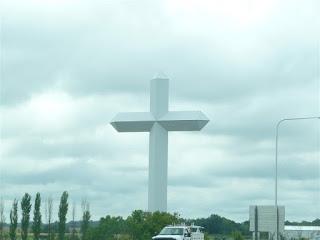 Near Effingham, we departed I-70 for I-57 South. A construction zone had a portable sign that flashed "Stop snoozing. Stay awake." Sometimes that is easier said than done. I stopped in one more rest area to splash water on my face. 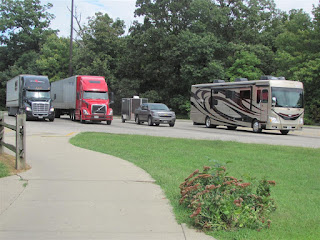 We are just a small vehicle 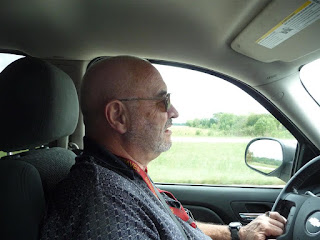 We exited I-57 at Benton and took 14 across to DuQuoin. Then we took 51 south, missed Truax-Traer Road and went all the way to DeSoto, before cutting back up and proceeding to Willie and Carlene's house. Carlene was home and we spent time visiting with her before Willie got home about 5:30.

For supper, Willie and Carlene took us to Quatro's Deep Pan Pizza in Carbondale, where we were joined by GWRRA folks Charlie and Rose. We've met them a couple of times before. Nice people. Sandy and I split a ham and pineapple pizza buried in thick mozzarella cheese. It was very tasty. Maybe it was an omen but we parked beside a Disney Vacation sign at a travel agency. 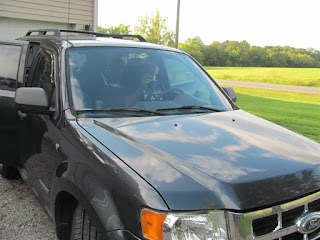 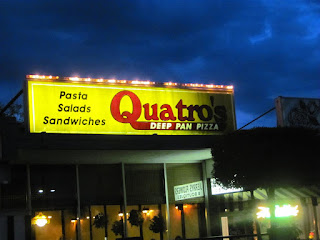 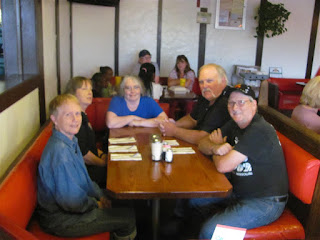 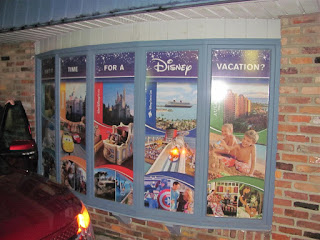 From Carbondale, we decided to go up to DuQuoin and get ice cream at Bob's Olde Country Store. Bob was in. The ice cream was awesome. This was our third time visiting Bob. 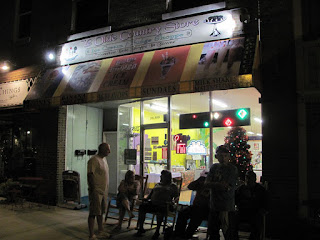 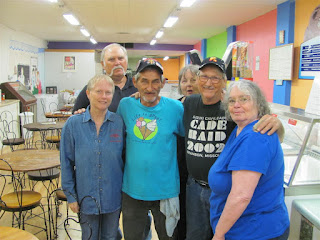 From DuQuoin, we returned to the house where everyone went to bed early. 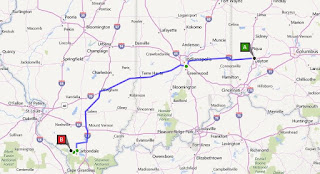