When I first contacted Willie Wonka to see what they would be doing this weekend, he told me he had been tapped to lead a GWRRA ride to Moonshine, Illinois for hamburgers on Saturday. The ride would be about 170 miles one way. He wondered if we might be interested. We were.

Moonshine is a place well know to those who have been there. It is apparently a crossroads with a building that serves hamburgers. One a year, the Moonshine Lunch Run attracts riders from all over. The rest of the year, they serve hamburgers just the same until 12:30 when the grill shuts down.

It was cooler this morning, about 55F, as I got the bike out of the trailer. We rolled out at 7:15 AM and were joined at the end of Ava Road by Charlie and Rose on their serious looking black Wing. As we headed towards the official rendezvous point in Harrisburg, Chuck and Paula fell in behind us on their blue Harley trike. Further on, we encountered an accident scene where a Harley had been rear ended at an intersection. The bike was a mess but we heard later on the news that the rider suffered non life threatening injuries. 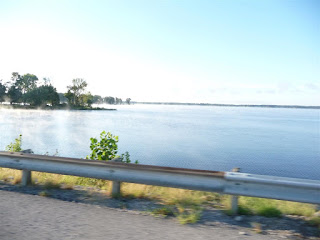 We arrived at H&H Motorsports in Harrisburg where new folks Bill and Toni on their trike and Wonkas' longstanding friends Charlie and Nancy on their purple Wing were waiting. Charlie, Charlie and Chuck. I sensed a pattern. 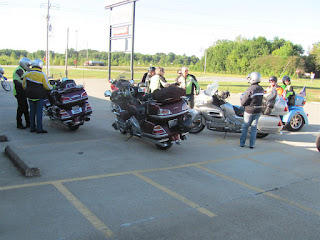 We left at the appointed 8:30 half hour and headed north with Willie in the lead and us riding second. Charlie (purple) brought up the rear. We made one bathroom stop at a Dairy Queen in Albion. 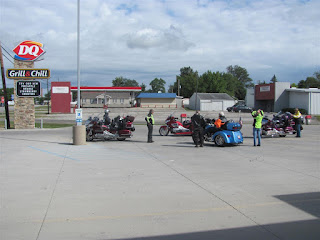 Then we moved onward, sneaking through one town where the main road was interdicted by a parade.. If we had not entered the crossroads/map coordinates into the GPS, we would never have found this place because there were NO signs anywhere. Part of the last stretch was on some very good gravel. But, when we approached the crossroads, there had to be fifty vehicles there. Cars, bikes and even a church bus. Many folks were eating at picnic tables beside the Moonshine Store. We had found Moonshine, Illinois (Population 2).

They have this hamburger thing down to a science. We went inside and ordered our burgers. They were ready within a minute. The condiments were outside and then we settled down at the tables to enjoy our feast. 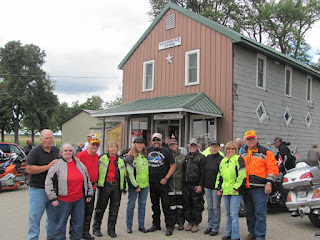 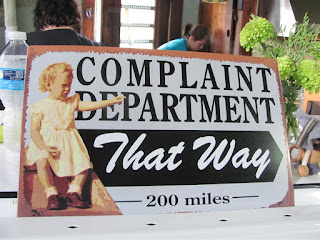 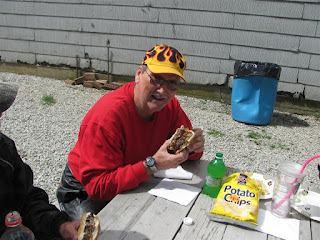 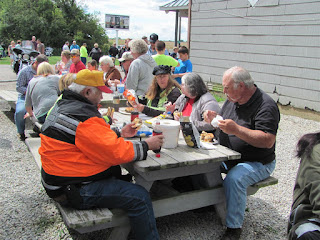 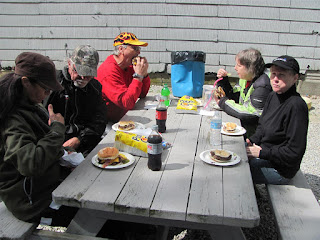 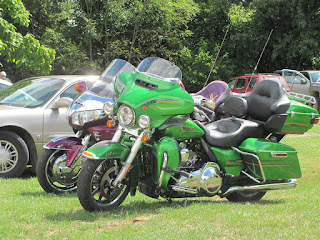 I just took the photo because it was green

When we had finished eating, we moved on to the second part of the ride. The Illinois GWRRA have a type of scavenger hunt where each chapter names their two favourite eating spots. All the members have to get pictures taken in front of a certain number of these establishments. The first place on today's list was another twenty miles east in West Union. That worked because Chuck needed fuel and the GPS said there was a gas station. We took some more gravel roads and reached town to find the West Union Cafe was open and the gas station was out of business. Never trust a GPS in life or death situations. 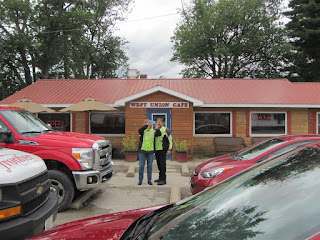 Chuck made it to the next crossroads, a place called Robinson. The station here had lots of fuel so we all topped off. Then we moved on south and then turned west on Highway 50. This is the loneliest highway in America further west, but isn't lonely at all here in the Heartland. 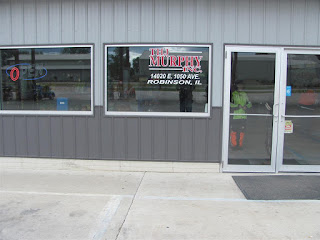 Along 50, we achieved the second objective at the Tin Cup Cafe in Noble. The third spot, Brew City just down the road in Clay City, was a little more difficult due to another parade. But the group got creative and got the photo. 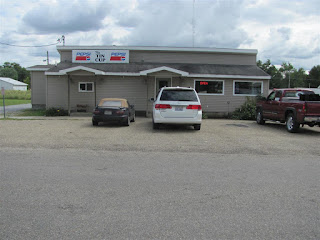 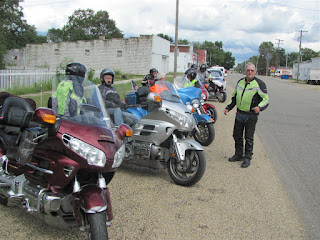 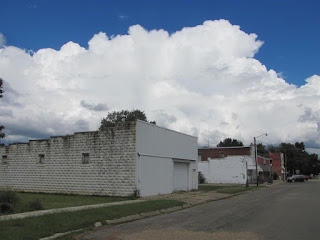 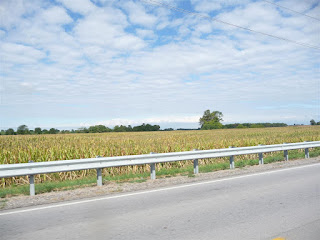 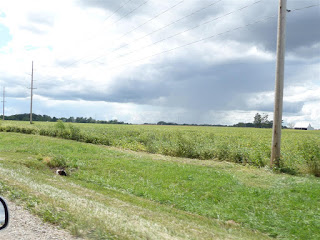 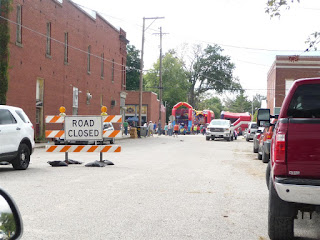 Our brief stops were enough to let the rain cells north of us come south. We got out of Clay City just as the first drops out of some particularly dark clouds were starting to fall. Because the cloud was coming out of the north, going further west on US 50 was a losing proposition. We took the first road going due south.

Charlie and Nancy peeled off part way down. Willie continued to lead us on a meandering path around the precipitation until we stopped at an ice cream wagon in Sesser. The rest had ice cream but I had a hot dog and coffee instead. 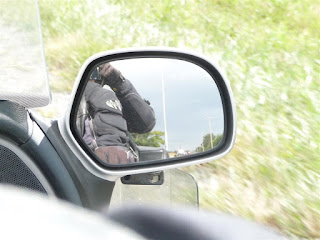 Happiness is rain clouds in your rear view mirror 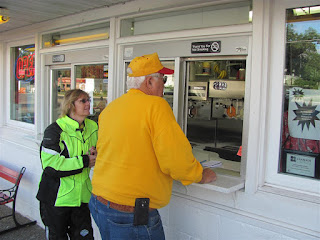 From Sesser, we followed Willie and Carlene to their place. Charlie and Chuck and their ladies broke off near their homes. We got back to their house about 5:30. This was the longest ride Sandy and I have done this year and is also the most miles we have done in a day since we left home. Wow! 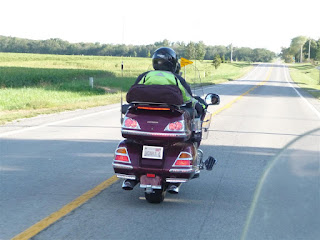 My turn signal button wasn't working right. Willie guessed a spring had broken. He took the whole assembly apart and worked with the precision of a doctor doing micro-surgery. He got it disassembled to the point he found the broken spring and then got a replacement spring from a bag over his work bench. Then he put two ball bearings and the spring together with grease and inserted the assembly into the switch mechanism, which then had to be positioned just so. It all went together and it worked. Amazing. Thank you very much, Willie. 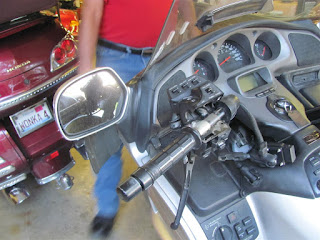 The whole switch assembly is apart 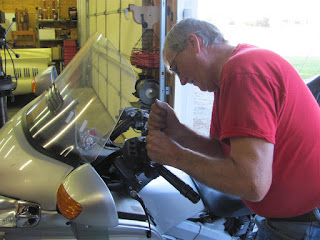 After the bike was fixed, I loaded it into the trailer and we went inside. None of the basic cable channels were carrying the Richmond NASCAR race so we spent the evening watching some baseball and football before turning in. 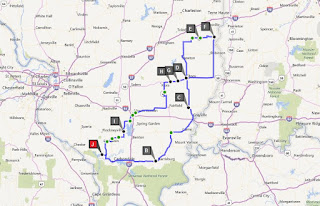