I didn't wake up until 9:00 AM this morning. Everyone else was already moving. The word from Sudbury wasn't good as far as the weather went. It looked like we got out of town just in time. Kenny posted a picture of his snow blower in a place where there hadn't been snow the day before. 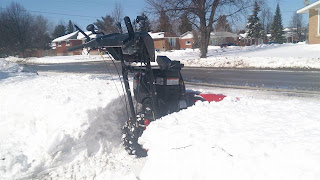 Everyone else was up before I was. Kim, Mike and the girls were getting ready to attend Good Friday church services. The granddaughters wondered if we were going and didn't quite understand when Grandpa Jim told them that he did not like thunder and lightning. Besides, we had seen a lot of them during the Disney adventure and were down primarily to spend some time with Jasper.

Outside, evidence of the ice storm littered the countryside. Kim's Mazda, where the build-up was almost an inch thick, was a prime example. 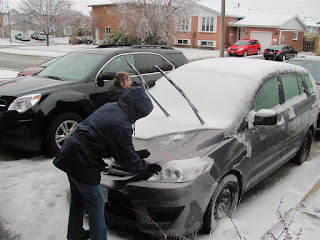 A coating of ice 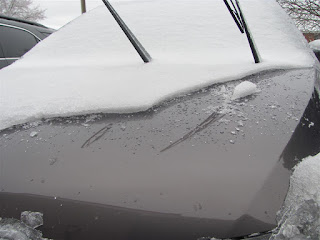 We stopped at McDonald's on Main Street so I could get a sausage McMuffin for me and a cranberry orange muffin for Sandy. For the first time in Canada, the system designated an order number on the receipt which displayed on a screen when the food was ready. The number system has worked well in the USA for years without the screen. This looks like it will be even better.

Heather called and asked if we could pick up some Hall's cough drops on the way. We stopped at the Flying J in Ayr and did just that. I do like the merchandise they carry in the FJ. It caters directly to travelers and professional drivers.

On the 401, we saw more evidence of the freezing rain as the ice laden trees glistened. 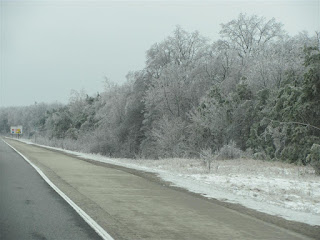 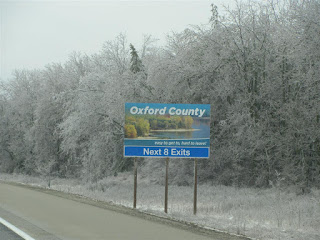 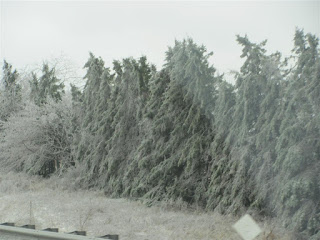 Even the evergreens got into the act 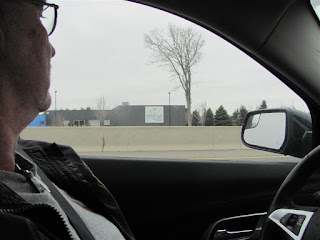 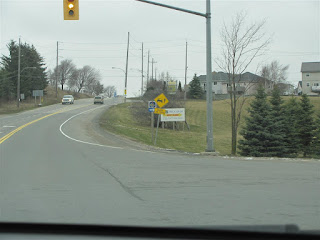 We arrived at Heather and Tom's just before 11:00 AM. Jasper and Tom were playing with trains on the floor while a sick Heather was flaked out on the couch, much the worse for wear. I helped play with the trains for a while. 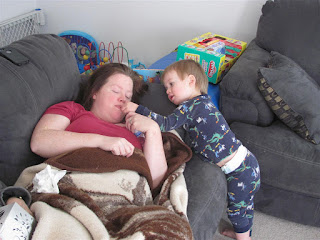 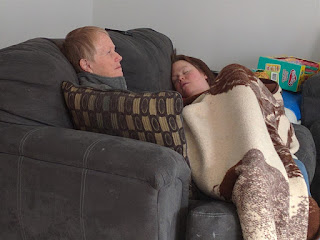 Have couch, will sleep 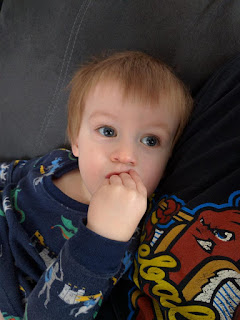 When Jasper went down for a nap, I sorted photos and notes and did some blogging. The smart phone has two camera programs on it. The FV-5 has a lot more options than the default Google camera but, due to an anomaly with the Nexus orientation sensor, the selfies come out upside down plus the photos are more difficult to upload. I may give up some sophistication in the interests of ease.

Jasper got up rested and went back to playing. We ordered pizza on line from Domino's, which Tom and I went to pick it up. Sandy and I shared a crunchy thin crust Hawaiian while my taste buds actually craved a Canadian (pepperoni, bacon and mushroom). Greater love....... 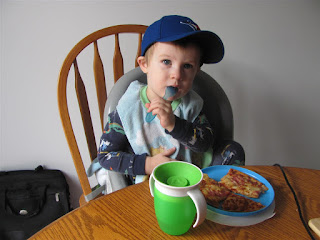 After supper, there was more playing. Jasper is getting quite vocal and, sometimes, we can tell what he means. He is still shy with us, though. Our fault for not seeing him enough.

Eventually, it was story time and bed time for the little guy. 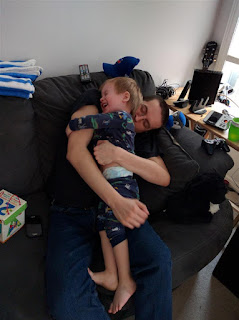 He sure likes Dad 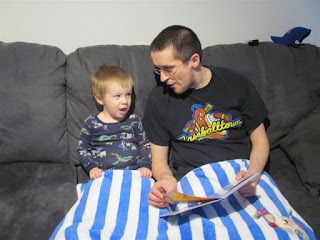 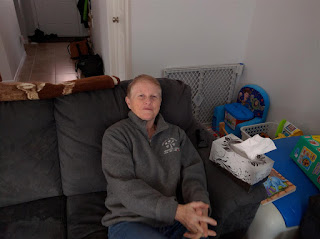 And then there was just Grandma

With everyone else in bed, Tom and I watched some episodes of The Office on Netflix. I never watched this series when it was originally on but I may make a point to blitz it some time in the future. Around 11:30, we called it a night as well. 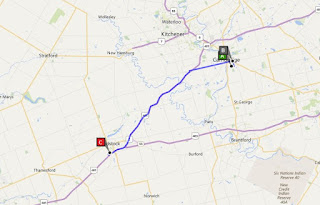