I woke up at 5:30 and spent an hour reading my Kindle. The current book on the go is Matthew Stewart's Nature's God - The Heretical origins of the American Republic. It explores the Deist leanings of many of the US Founding Fathers and the expansion of Deism in the western world in the 1700's. That is interesting because, today, hardly anyone had ever heard of Deism. I developed the belief before I knew it had a name.

After my morning read, I went down and made sure the blog was caught up to date as I enjoyed my first coffee of the day. Jasper got up and had some yogurt while I typed. 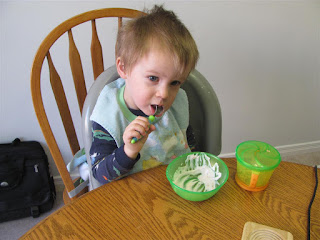 Yogurt is the best

It was a slow day because Heather's cold/flu was still keeping her down. Eventually, Sandy took her over to the ER where they said there were a lot of people with these symptoms. They suggested staying hydrated and running a humidifier. Part of her problem is that she is very restricted on what remedies she can use since she is expecting a new arrival in a couple of months. 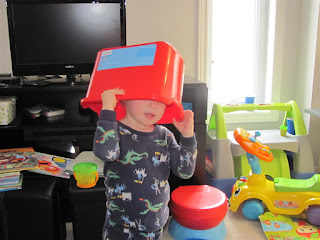 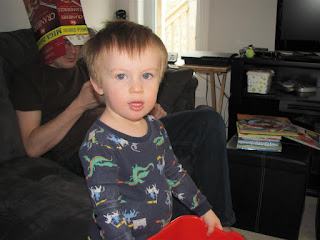 Sandy and I picked up lunch at Tim's. We read and played with Jasper with Season 5 of The Office playing in the background. Supper was sandwiches and, after JJ went to bed, Tom watched Galaxy Quest for the first time and then the rest of us turned in.
Posted by Jim "Skid" Robinson on 3/26/2016