Happy Easter. After getting up at 7:00, I read Jasper stories for a while. The Weather Network said it would be +5C in Sudbury today, with rain falling on top of the recent snow. Heather was still sick and there was heavier rain called for tomorrow, so we decided we would head back a day early.

We left just after 11:00 AM, stopping for fuel and some food at McDonald's (where we found one of the new order kiosks aimed at countering increasing minimum wages). By 11:30, we were headed east on the 401 enjoying blue skies and 41F temperatures. 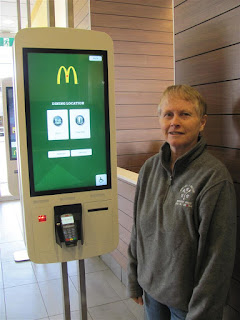 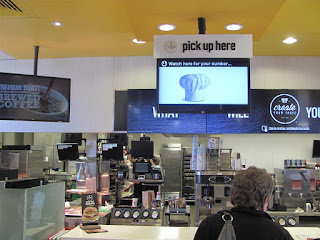 This tells when your order is up

Traffic was light on the 401 until we got to Halton. Then it started to get heavier so, because this was the last day of a long weekend, I decided to pay the extra charges for the ETR407. That got us to 400 North with no slowdowns. Traffic on the route north was surprisingly light. We stopped at the On Route Service Centre in Barrie for a bathroom break and then at the Subway in Waubaushene where we got a ham and Swiss sandwich to share. 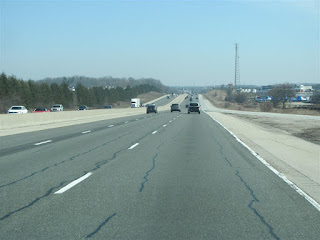 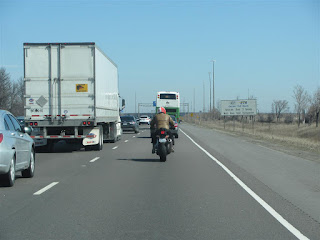 There were a few motorcycles out 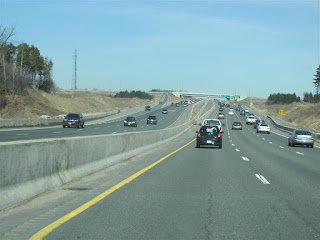 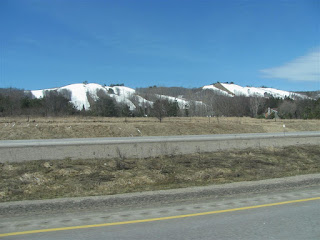 No skiers on Mount St. Louis

We went through Parry Sound around 2:30, noting that there was almost no snow on the ground.

I always wondered about Avro Arrow Road in Nobel. First, Nobel was named for Alfred, discoverer of dynamite and originator of the Peace Prize. It was home to two explosives and munitions factories in World War I. They closed in the 20's but were reactivated in WW II. That doesn't explain the reference to what should have been Canada's greatest contribution to modern aerial warfare, the Avro Arrow. The planes were built in Toronto and the chief test pilot was from Wilno. What I just found out is that the Orenda Iroquois jet engines that were to power that magnificent airplane were developed at a plant in Nobel. 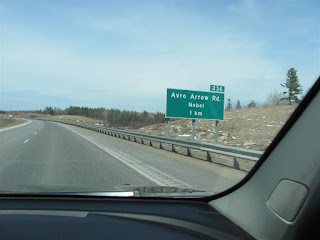 North of Pointe Au Baril, we encountered more snow. This would be residue of the Good Friday storm that spared the south. North of the French River, we noted fences alongside the right-of-way. They were positioned like the larger wildlife fences to the north, but these were less than three feet high. I need to call MTO and find out just why they built these non-barriers. 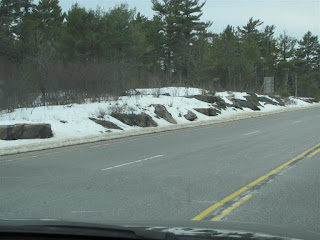 More snow as we get closer to home 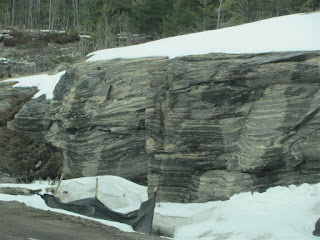 As we took the ramp from Highway 69 North to the Highway 17 Bypass, we met an OPP RIDE (Reduce Impaired Driving Everywhere) Check hidden behind the rock cut. It was good to see them out at an unexpected time and I thanked them. The stop just took a moment and we were on our way.

Arriving home at 3:50, we found a plow bank at the end of the driveway and a drift across my parking space. I refused to get the snow blower out and attacked the white stuff with my trusty shovel. No point in doing a perfect job since it was just going to melt anyway. 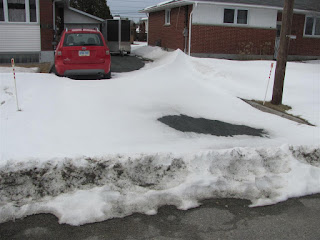 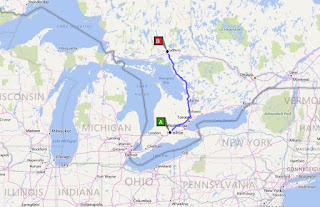