After the unseasonably warm March and hopes for an early spring, April gave us a dose of reality. 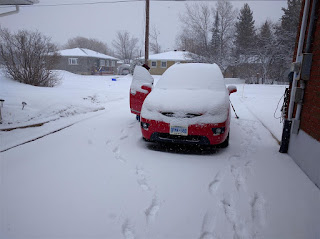 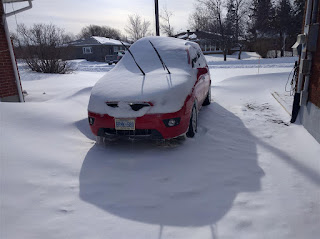 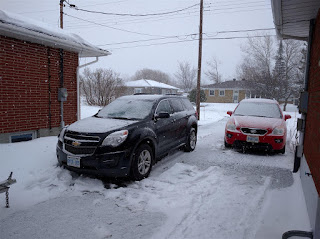 The snow finally stopped falling but the weather stayed cool until the end of the month. On the last day of the month, VROCer Bill52 and his wife Ellen stopped in Sudbury on their way back to Winterpeg from Ottawa. Bill has been part of our VROC newsgroup discussions for a lot of years but this was the first time we met face to face. We had supper at Shoeless Joe's and then we took them on a brief tour of the Sudbury Basin. As of midnight, Bill would be a retired soul. Congratulations and we hope to see the two of you again. 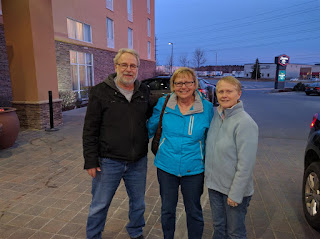 After the less than ideal April, I finally got out on the golf course on May 3rd for the first time. The bike didn't fire up until three days ago but I took it for a test run yesterday and all seemed well. The trailer was serviced and Larry's remounted the front jack so that it will be easier to extend and retract. It has been a long winter and now we need to get out of town for a little while.

We leave tomorrow for Maggie Valley to attend the Southeast VROC (SEVROC) spring rally. We'll arrive in MV on Monday afternoon and stay until Sunday morning. Then, instead of heading home, we will move over to Two Rivers Lodge in Bryson City where we will be joined by a few Freedom Riders for four more days of Smoky Mountain excursions. We'll be homeward bound on Friday the 27th, arriving Saturday evening.

This was originally going to take in the Wolfman's Wandering Rally in Taos and then the Cat Memorial Aebleskiver Rally in Solvang, California four weeks later. The intervening time would have given us time to check some things off our bucket list.  However, we could not justify leaving Sandy's Mom for that length of time so we cut it to a quick blitz to visit friends in northern New Mexico. We won't even be towing the bike for this run to save costs. Being back for July will also make it easier to get ready for the Freedom Rally here at the end of the month.

Another group we belong to has decided to get together for a weekend in the same hotel we used for the VROC WWR in 2009. Again this will be a down and back so we won't even take the bike.

This is the annual Great Lakes VROC gathering at Cycle-Moore Motorcycle Campground. Sandy has relented on her pledge to never tent camp again after considering $10/night camping fees versus $100+/night for a small motel. We will work it out with the cots.

Travel without the bike is new for us but it is logical for trips where the opportunity for quality riding will be limited. I was following our friends Gary and Nancy's travels on Facebook. They aren't riders but they have been getting to some interesting places and I realized that the motorcycle is not the essential component in a successful road trip any more.

Stay tuned for the play-by-play as we wander through another season of retirement traveling.
Posted by Jim "Skid" Robinson on 5/13/2016