Dustin the cable guy was here at 8:00 AM and he managed to get the TV sorted out. Sandy and I had cereal and coffee in the room instead of going out. It was raining lightly with a pessimistic forecast. By 11:00 AM, we had enough so all four of us piled into the Equinox (I don't really know whether to call this a truck or a car) for a drive. 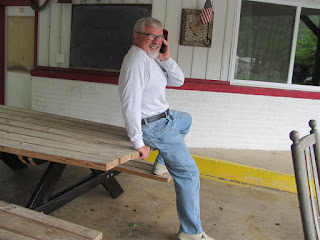 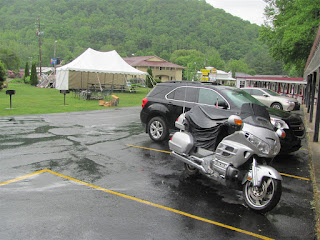 I felt Lanny needed to see Schroader's Honda in Hendersonville. It is a huge shop that specializes in GoldWings. We took I-40 and I-26 to get there. As usual, the floor at Schroader's had GoldWings from several eras up for sale. If you wanted a 1500, they have a selection of them. They even have a number of 1500 Valkyries. 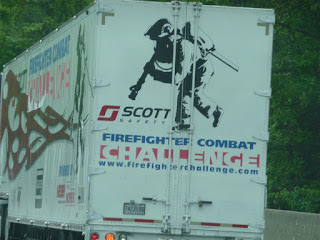 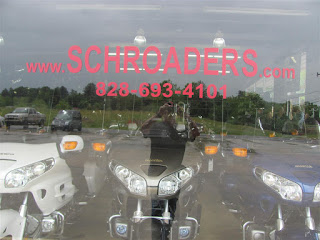 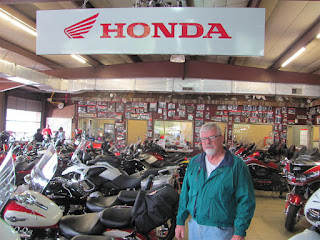 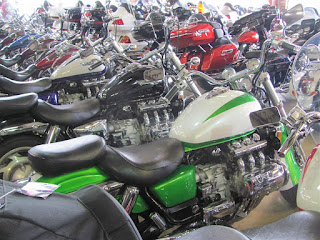 Since we were in Hendersonville, I decided to stop and see CJ at Justice Cycle. He helped us out of a bind back in 2007. It turned out he was retiring and was liquidating everything in the shop. He guessed that since the 60's, he had changed over 30,000 tires in that little building. We wished him well with his plans to go fishing and play with his 50HP hopped up garden tractor. 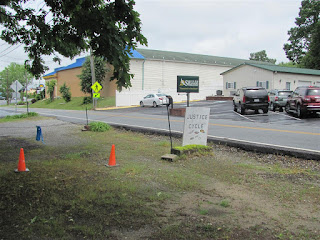 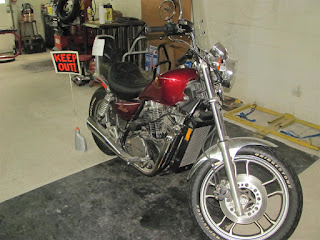 We drove up US 64 to Bat Cave and over to Lake Lure. The Margarita Grill has been renamed and was closed so we went back into Chimney Rock for lunch at Genny's, an old haunt from the days we used to hold SEVROC here. As I was looking for a parking spot out front, another driver called me a dumbass for not using my signal. After all my complaints about others, I guess I have to own this one because he was exactly right. 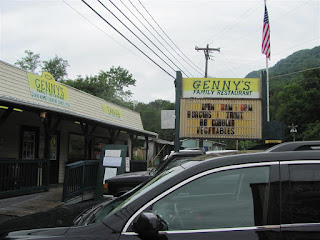 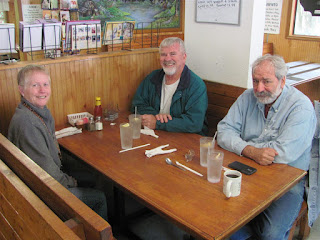 After lunch, we drove the one mile up the winding road to the gate of Chimney Rock State Park. The entry fee was $15.00 each so we decided to skip this adventure and drove back down. We followed 74A as it wound over the Eastern Continental Divide and turned onto the Blue Ridge Parkway just before Asheville.

Traffic was very light on the Parkway. I stopped at the Pisgah Inn because we had never checked out the facilities before. Every room has a spectacular view plus they have a dining room and a gift shop. It would be nice to spend a night here sometime. 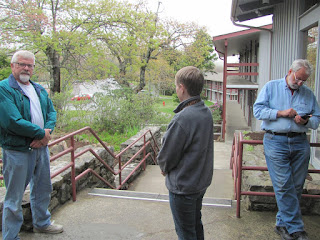 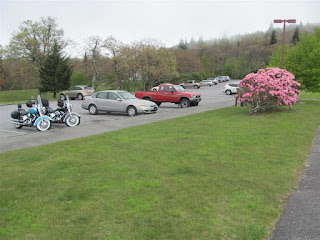 We left the Parkway via US 276 down to Waynesville and arrived back at the motel at 4:40 PM. Cheap B, Wanda and Tbone had moved in, as had Dirt Digger and Mud Turtle. Gambler and Bubbles were just arriving from Arkansas. There was also a V-Strom rider from near Ottawa and Bob, a 750 Shadow rider from Chattanooga, both of whom were not part of VROC. Southern Draw, Charm and Thumper arrived soon after. 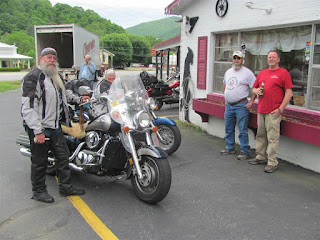 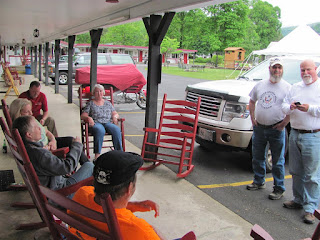 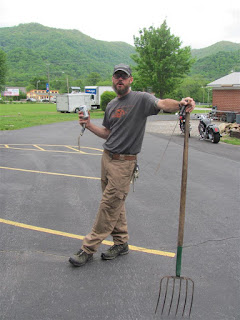 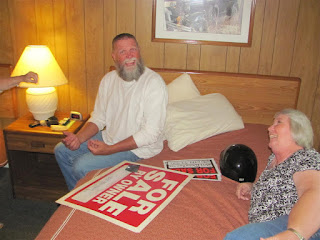 Southern Draw is planning to sell something 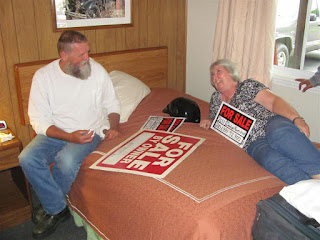 I wonder if Cheap B knows? 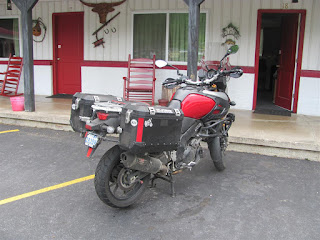 Sandy does not like Mexican food but Guayabitos was right across the street so we decided to join the crowd. She had a taco salad that she wasn't totally thrilled with. I had some thing called Mole Ranchero which was supposed to feature a juicy chicken breast. I suppose there could be different interpretations of juicy, but this was pounded flat and chewy. It was also tasty, and the mole sauce was pleasant. Then Bubbles got some sopapillas and offered me one. The version here was thin and crispy. Mine broke and dumped whipped cream all over me. The high point was the cocktail accompaniment. Sandy had a pina colada while I had a frozen margarita that held a hefty punch. Southern Charm ordered a large margarita on the rocks that came with its own punch bowl. 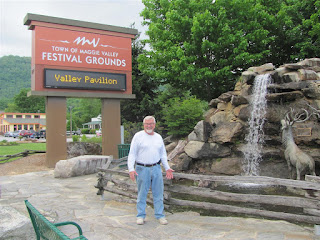 Nice little spot on the way to Guayabitos 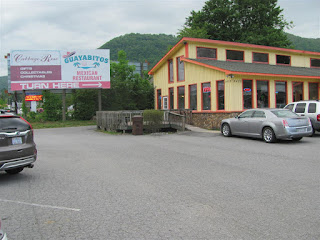 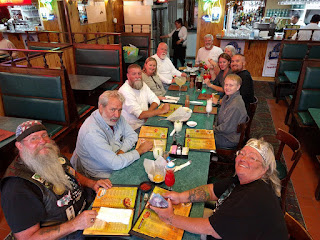 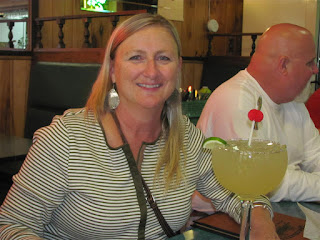 All that for one little lady? 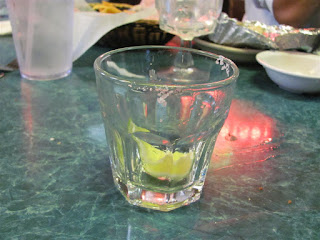 Tequila shooters for the ladies 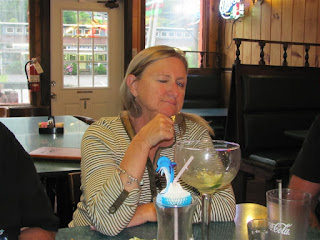 I can't believe I drank the whole thing 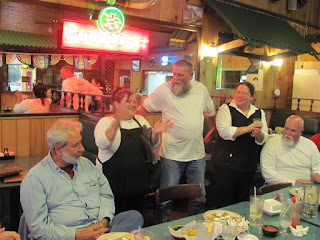 After supper, someone started a fire. Some listened to tunes while others talked about this and that. Then some started to sing. Slowly, as the evening went on, people slipped away to go to bed. I joined Sandy in the room about 11:00 PM. Again, I took care of a few computer chores and then went right to bed. 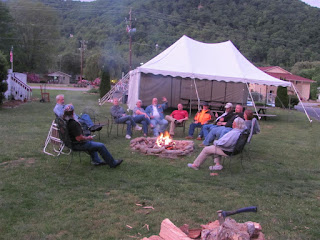 A great way to end any day 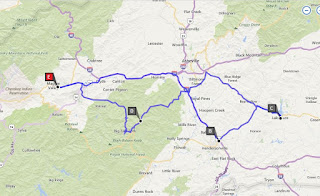