The Hampton Inn had small omelets, ham and French toast in its breakfast selections. It was nice and the coffee was acceptable to Sandy. The freeze warning overnight yielded some frosty windshields in the parking lot but it was 35F under a cloudless sky as we set out. 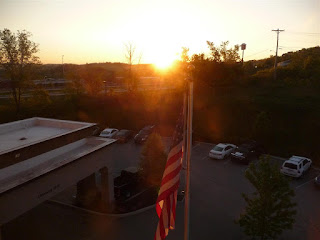 We rolled up the ramp on I-79 a few minutes before 7:00 AM. I noted again that my voice notes on my recorder were getting long and rambling again. As I told myself to shut up and get to the point, I imagined other folks might sympathize with this sentiment from time to time. 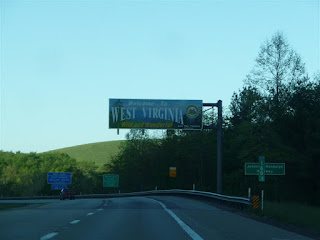 We started to encounter more serious grades in West Virginia. The V6 worked hard but it handled them as well as the Avalanche did and was telling me it was getting better fuel mileage. We stopped in Fayetteville to use the facilities and increase the trailer tire pressures a bit. The air at Sheetz was free, not so common any more. 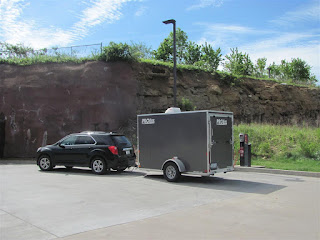 It was up to 46F in Beckley as the overcast started. We received our first call on the new US number. Unfortunately, it was a scammer claiming to be the IRS and telling us we owed them money. Not an auspicious start. 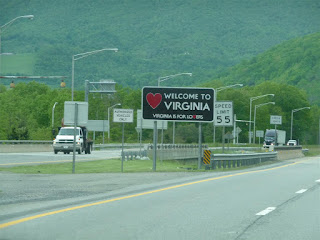 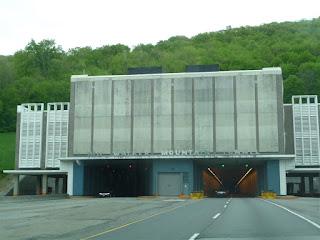 We didn't stop at the Travel Center of America in Wytheville despite the $1.99 gas. On I-81, I noted some big trucks swaying in the crosswinds and was happy that our outfit was so stable. 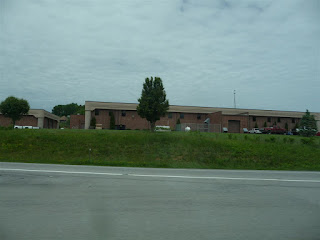 We stopped in Abingdon, Virginia so I could use WiFi and then call the retirement residence in Sudbury regarding Sandy's Mom. I left a voice mail. We continued on, taking Exit 3 and proceeding through Bristol Virginia and then Bristol Tennessee. 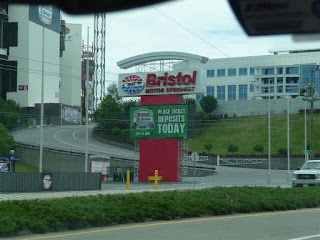 In Johnson City, I was navigating through the city streets looking for I-26 East when Jackie from the retirement residence called back. While talking to her, I missed a turn and we wandered about town missing a few more turns before the call was over and I could concentrate again. This was a perfect example of distracted driving despite using hands free.

Proceeding south on I-26 East (that's right), we climbed the ridge and crossed into North Carolina. The car handled the speed on the steep downhill side with the transmission. When we reached Asheville at 3:40, we found that traffic was crazy. Maybe their rush our is earlier? We followed I-40 West to US 74 and then US 19 to the motel in Maggie Valley, arriving at 4:20 PM. 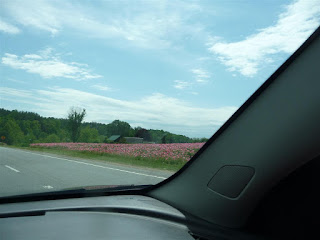 We found Lucky Al sitting outside enjoying the 71F temperature. We had arrived. Lanny, coming all the way from Arizona, pulled in five minutes after we did. Perfect timing. Three VROCers were now here (New Jersey, Ontario and Arizona) all on GoldWings. 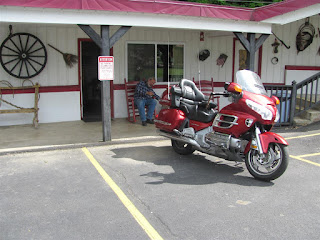 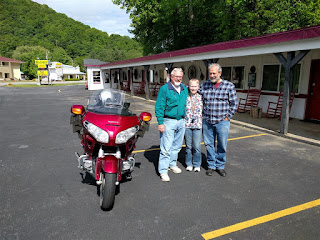 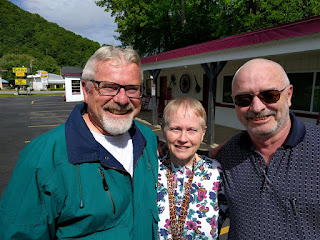 I got into a picture

Rob, the motel owner, came over and checked us in. We then unloaded the bike, parked the trailer and brought all our gear into the room. 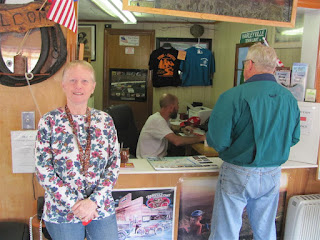 You can get a device called a bra for a motorcycle. It covers the front of the fairing and protects against bugs and rocks. Lanny found on for our bike and was good enough to install it for us. 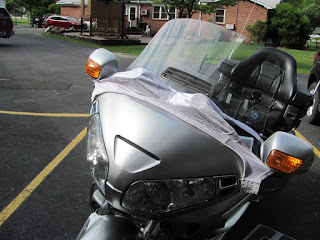 Our first supper was planned for Fat Buddies BBQ in Waynesburg at 7:00 PM. The four of us piled into the Equinox and headed over, where we met Cheap B, Wanda and Tbone. Southern Draw, Southern Charm and Thumper showed up soon after. The dinner was good and the joking around outside afterwards was better. The rest would be checking in tomorrow, so we went our separate ways for the evening. 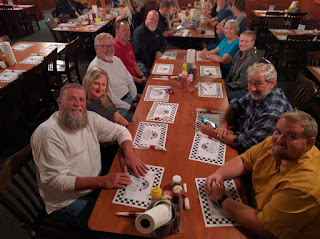 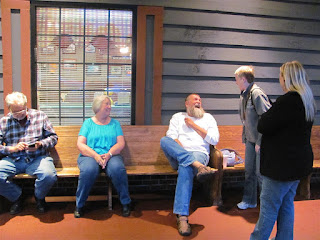 Just hanging out after supper 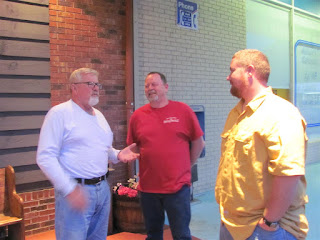 Lanny regaling Tbone and Thumper with tales of the wild west

On the way back, the four of us stopped at Walmart for supplies. 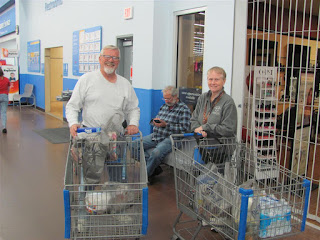 Well provisioned and waiting for Al

Back at the room, there was a note from co-proprietor Gabi that they had not been able to get our TV working but the Charter repairman would be here tomorrow between 8:00 and 9:00 AM (if that wasn't too early for us). It was after 10:00, so we didn't even try to turn it on. After my end of day book work, we were in bed with the lights out by 11:00 PM. 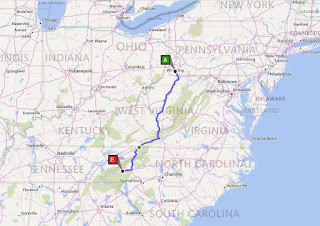