Sandy and I were up at 6:30 AM. I finished yesterday's blog and checked the weather. They claimed 0% chance of rain today and no more than 20% all week. After checking tire pressures, we left at 9:00 AM and rode to the Everett Street Diner in downtown Bryson City. There was a whole table of State Troopers in there at the same time. 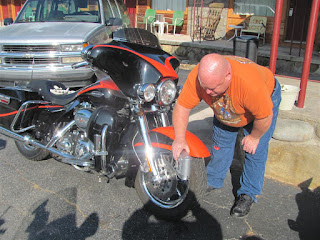 Don airing up his front tire

When we left, we couldn't turn right on Highway 19 because it was blocked by local police. So was the intersection above and they appeared to be evacuating people. After we came back to Ela and fueled up, we headed west on 74 and saw the troopers had the exits to downtown Bryson City blocked as well. We found out later that there was a gas leak downtown, much less exciting than the barricaded suspect I originally had envisaged. 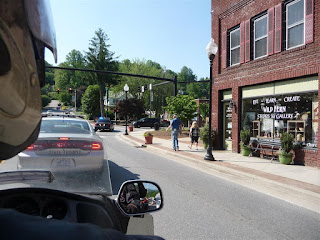 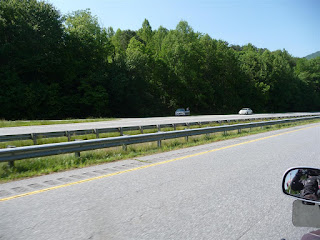 State troopers close off the exit to Bryson City

We followed US74/19 to the Moonshiner 28 intersection and turned south towards Franklin, riding the twists and turns. From there, we headed east on US 64. Just as we left the valley and started into the twisty section, we caught up to a car who had caught up to a Florida driver. One of the worst things you can see here is a Florida plate because the last time they saw a curve might have been never. They drive well under the speed limit and apply the brakes at every hint of a bend in the road. Finally, she (yes, it was a lady) pulled over just before we reached Dry Falls. 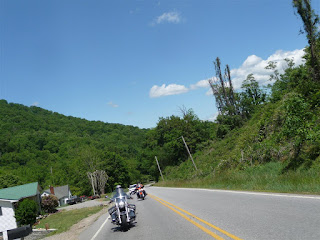 No one walked down to the falls. We all observed from the viewing platform. There were two men and two ladies there, each riding a rented Harley. They were from Massachusetts and one lady said she was practicing for The Tail of the Dragon. I told her that if she could handle this stretch of 64, she would have no trouble with The Dragon. 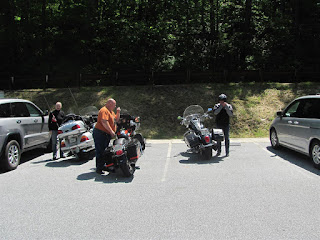 We continued on 64, stopping at the Citgo for cough drops for Sandy. This was the place we waited out a hail storm before Jim and KT's wedding five years ago. In Brevard, we noticed banners for the White Squirrel Festival this weekend. It sounded like fun. Too bad we'll be gone by then. We turned left on US 276 (aka the Pisgah Forest Road) and stopped at the ranger station where they told us that life guards would be on duty at Sliding Rock starting this weekend and they would be charging a fee for parking. 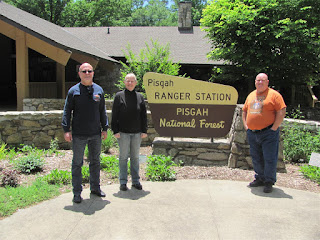 Starting up the Pisgah Forest Road (US 276)

I found while riding 276 that the smoothness I had worked out last week deserted me, leaving me gripping the bars tightly and riding in a jerky fashion. It was frustrating. We stopped at Bogart's in Waynesville for another lunch. Coleman wasn't their but our server was still top notch. I had a huge salad and Sandy had the same Outlander sandwich she had the other day but minus the bread. 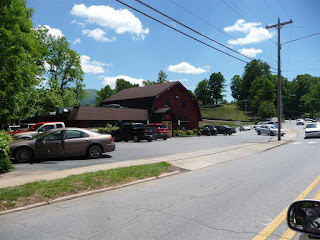 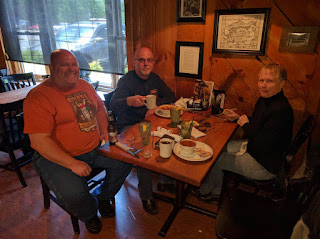 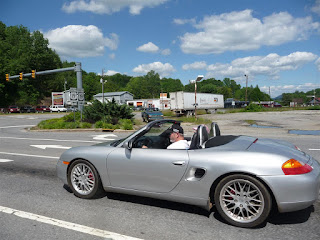 Porsche driver with a Harley hat 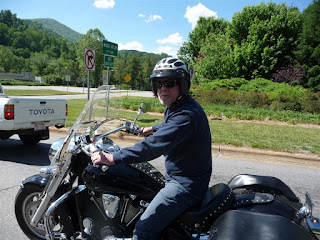 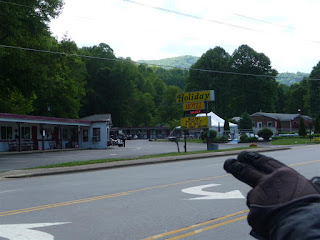 We arrived back at Two Rivers around 4:30 and took the car to Walgreen's and Ingall's (a grocery chain) for supplies. We saw that Walgreen's was promoting Red Nose Day, a whole other thing than our Operation Red Nose. We also got Blain a card because his brother Pappy let it slip that this was the anniversary of his birth. 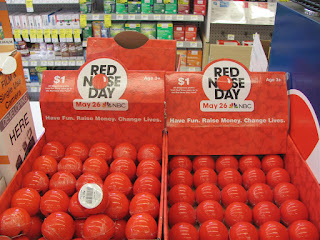 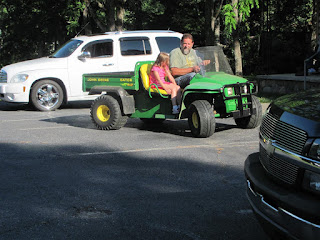 Angel and the birthday boy

After our large, late lunch, we didn't have a formal supper. We sat out and talked for a while and turned in before 10:00. 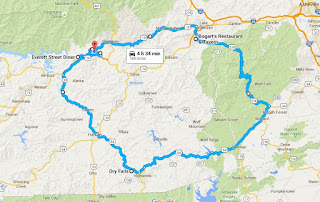