We woke to the sound of a truck pulling out at first light. That had to be Bass Man and Laura heading back to Arkansas. This would normally be the time we were on the road as well, but we were not going home today. We were merely moving over to Two Rivers Lodge in Bryson City until Friday.

I logged in to see how Biker and Don were making out coming down from Sudbury and saw that the SPOT had been left on all night. It documented sitting in the Hampton Inn parking lot in Waynesburg Pa, but the battery appeared to have died about 6:00 AM.

Once folks started stirring, there were rounds of goodbyes as people headed out. Those that were left went up to Country Vittles for a final breakfast. We had never been part of this ritual before. It was nice. The final goodbyes were said and we found ourselves the last ones at the motel. I connected the trailer, loaded the bike and we were on our way for the forty mile trek to Bryson City.

Thanks to Jax for all the organizing over the years. This year was excellent again. Thanks to Mikey and Linda for selling the raffle tickets, Mark for leading us and all the others who helped out. Thanks also to all the members of our VROC family who show up to make SEVROC the amazing week that it is. 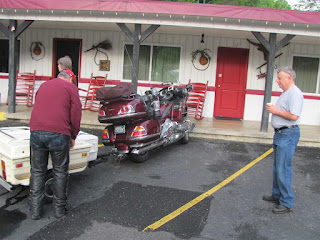 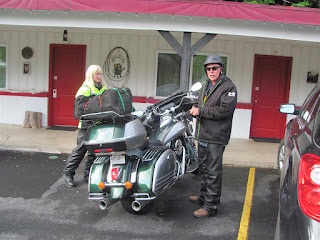 Teresa and Butch would be riding with them 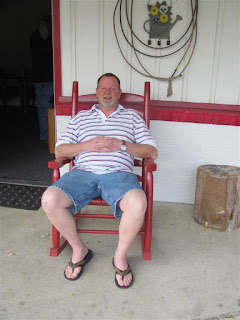 Tbone dressed for pulling a trailer

We stopped at the Waynesville Walmart and bought Sandy two cases for her new tablet. One was a carry bag that holds the tablet and its folding cover and the other was a protective case for just the Tab (because it was only $5.00). We bought them from the same young lady I told off a couple of days ago. She didn't seem to remember us.

Blaine and Kathy at Two Rivers welcomed us warmly, as usual. (The GPS pronounces it r-eye-vers.) I unloaded the bike, parked the trailer and dragged the gear inside. The motel now owns the houses on either side and rents them out as cabins. Blain showed me the one at the back. It is 1,500 square feet with three bedrooms, two bathrooms, a fully equipped kitchen, dining area and living room and a washer, dryer and gas grill in the garage. The price was extremely reasonable, something to consider for groups in future trips.

There was a note a couple of days ago from Mark, composer of Ballad of the Gap (my favourite motorcycle video). He and the guys from Toronto were in Maryland but would be in the Microtel in Robbinsville this week. Maybe we will run across them.

As I worked on the laptop, I could watch out the window and see a bit of US 19 in front of the motel. I kept one eye out since the SPOT told me nothing about the other contingent's location since 6:03 this morning. Finally, I saw a pickup with a Harley in the box towing a landscaping trailer with a black bike slow down. But then it kept going. Did they miss the turn? Gary called a few minutes later to say that it had been a long dry day and they were going to pick up beer. They pulled in a short while later. 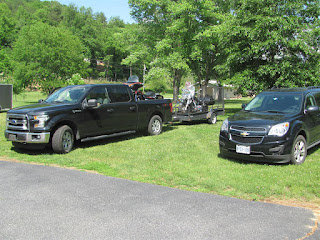 Biker and Don have arrived at Two Rivers 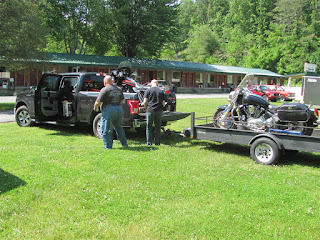 Biker's Vulcan 2000 kept coming loose on the way down. That was hard to imagine considering how securely it appeared to be tied down. We unleashed it, backed it off the trailer and unhooked. Then Don drove the truck around to where there was an elevation change between the yard and driveway. We were able to get the Harley unloaded without mishap. 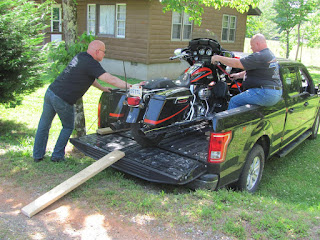 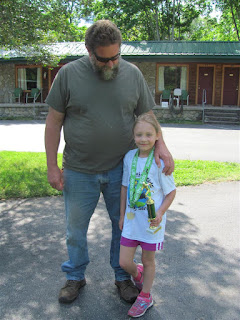 Angel did really well in the fitness run

Kathy and Blain came down and visited for a while. When suppertime came, TripAdvisor  said that the Bar-B-Que Wagon was open. Blain expressed doubts because it was Sunday and he turned out to be right. We went on into town and got a table at Jimmy Mac's. The server was fun and the food was good but some of us ate too much. BTW, if you are ever here try the clam chowder!! 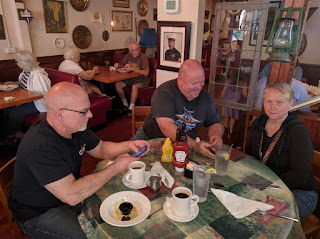 On the way back, we stopped at the bridge over the Tuckasegee River. When Biker and Don were going to get beer, they noticed something I never realized despite all my time down here. The riverbank was stabilized with crushed cars. Some research shows this is called Detroit Rip-Rap in some quarters. 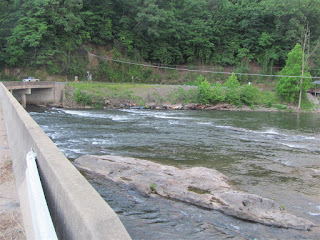 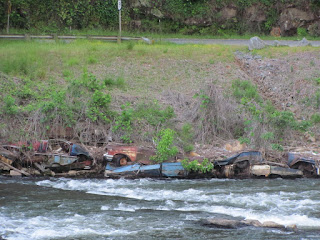 I never noticed this retaining wall before 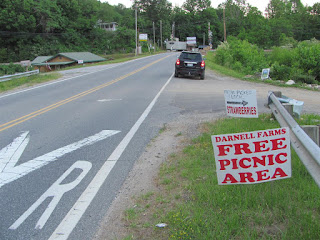 Back at the rooms, we sat outside and  talked of many things. The two seem to be willing to put their fate in my hands over the next few days. I will try to be worthy of the honour. Tomorrow, we'll do breakfast at the Everett Street Diner and pick up some fixings so we can do something light in the room for the rest of the week.

We were in bed fairly early. 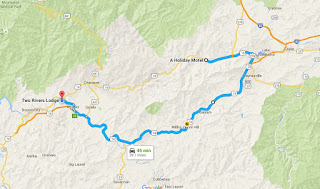