We had cereal in our room this morning. I worked from 7:00 until 11:30 getting the blog posts caught up while listening with one ear to the conversations going on out side our door. 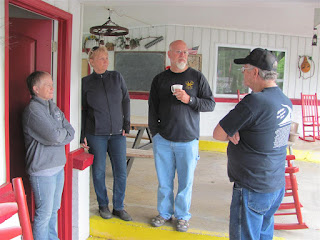 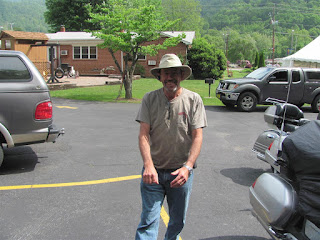 Around noon, we rode out accompanied by Butch and Teresa, Tbone and Lucky Al. The forecast called for rain again but we enjoyed sunshine for now. We followed US 19 towards Cherokee and, when we got up to Soco Gap, we could see a mixture of sun and angry looking crowds across the horizon. We rode down through Cherokee and on to Three Rivers Lodge. 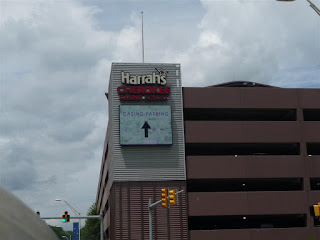 Kathy and Blain were home so we stopped at Two Rivers for a visit. Sandy and I will be staying here with the Freedom Riders contingent next week. Unfortunately, we got news this morning that Nepper and Yo won't be coming because his back issues have flared up severely. We will miss them. Blain said that his brother Pappy, a longstanding (I was going to say old) VROC friend will be arriving tomorrow. The new metal roof looks excellent. 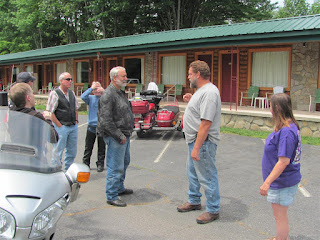 Departing Two Rivers, I led the group onto US 74 heading for Robbinsville via the Nantahala Gorge. As we approached the gorge, I saw a big truck ahead and realized we would not catch him before we got there. I decided to stop for gas at the BP to give him a chance to get ahead. While we stopped, a couple of Nissan sports cars came in for fuel. We have been seeing these all over. Yesterday, we met a group of more than twenty of them on NC 28. They look like they are having fun. 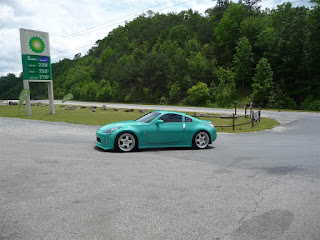 We have been seeing these Nissan's all over 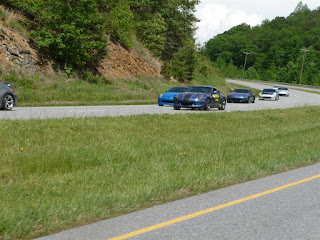 Another little pack goes by 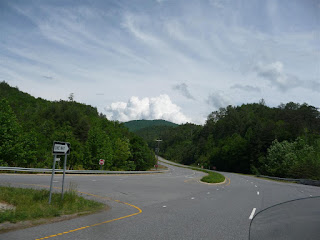 A hint of some weather over the next hill

We didn't catch up to the big truck in the gorge. Instead, we caught up to a pickup truck with Alabama plates and a kayak on its roof who was traveling just as slow. Maybe slower. He finally pulled off after passing the restaurant. We immediately caught up to a couple of rafting buses but these were quicker and didn't cause any frustration right up to where they pulled off on Wayah Road.

There was no traffic on US 129 to Robbinsville and we found The Hub right where they said it would be. It was crowded inside so we settled down at an outside covered picnic table. The server was fast but it took forever for the food to come. Sandy and I each had a cup of Jean's Pork Stew and split a BLT. The stew was OK but I'm not writing home about it.

They had a large map on the wall and were selling waterproof smaller versions inside. It had all the roads I know on it so I meant to buy one but forgot. I will get it the nest time we're in Robbinsville. 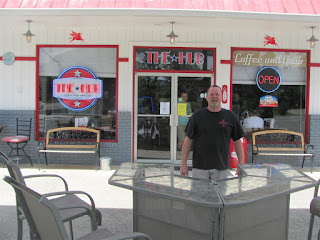 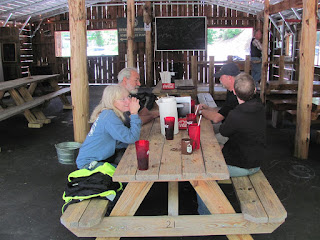 Outdoor seating at The Hub 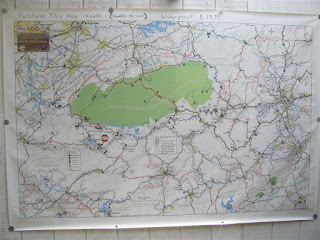 Great map - I forgot to buy one

We headed back via NC 143, US 74 and US 19, not knowing if the angry clouds we could see were going to be a factor. Traffic was held up coming out of Cherokee for a fire, although we couldn't see what was burning because it was in the trees. Maybe it WAS the trees.

As we rode up to Soco Gap, the temperature dropped. When we hit the top, we lost the sun because a low lying cloud was hanging over/in Maggie Valley. It was now under 60 degrees and damp. We crossed our fingers that we would stay dry for the last four miles and beat it to the motel. Our luck held. 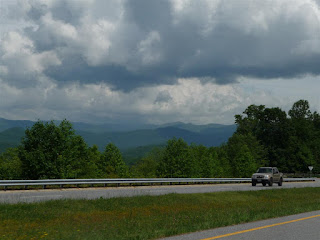 Please don't rain on our parade 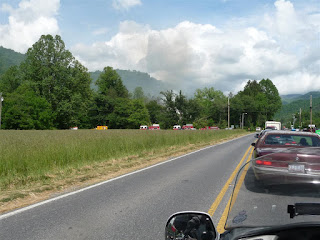 Great balls of fire in Cherokee 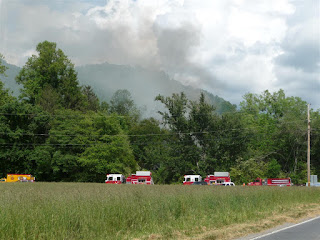 We couldn't quite see what was burning

Back at the ranch, more people had been arriving. Eventually, many decided to head for the Moonshine Grill but we had not eaten that long ago so we didn't go. 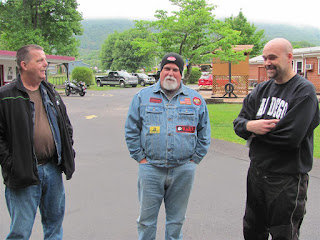 Phillip, Cheap B (note the cold weather attire) and Flip 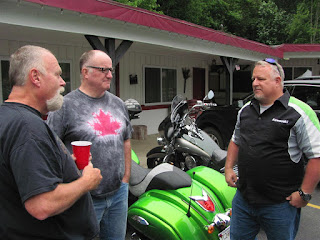 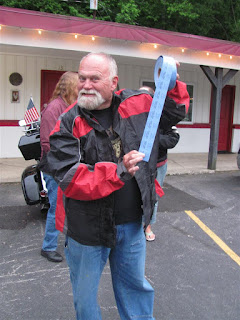 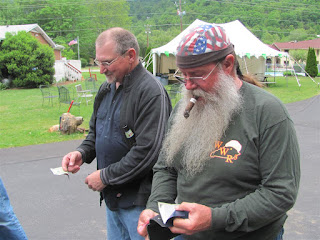 Willie Wonka and The Lovely Carlene arrived as did the rain. They got settled and then mentioned that they had not eaten yet. We took the car down to Ammon's, a little burger joint down by the 276 intersection, joined by Bass Man and Laura. Sandy just had a root beer float while I had a burger, hushpuppies and no sugar added peach pie with no sugar added ice cream. So much for watching the calories. Thank you Willie and Carlene for the supper. 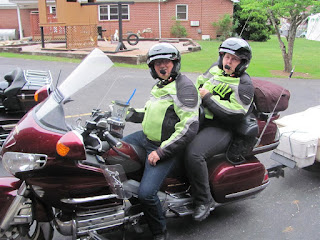 Willie Wonka and The Lovely Carlene have arrived 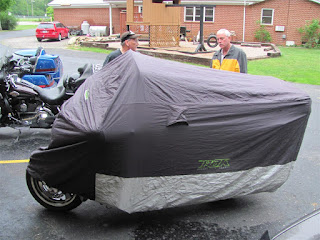 And the rain starts

Back at the motel, the rain mostly let up. We mingled and visited with a lot of folks. 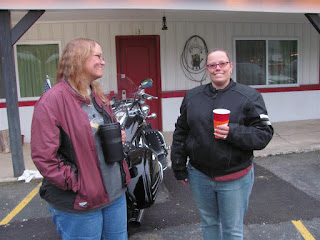 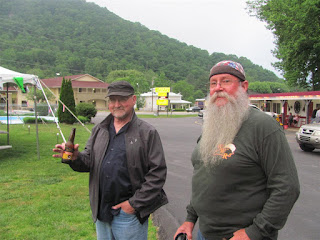 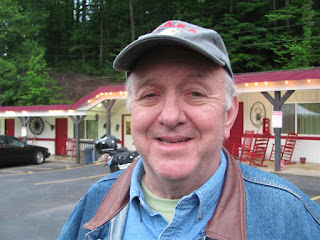 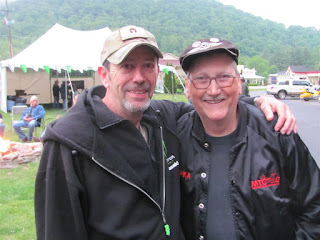 Lucky Al helped Lanny change a throttle cable on his Wing. This was not a simple task, given all the body work and electrics on these bikes. He broke the cable on a ride with Flip, Boomer and others and picked up a replacement at Schroader's in Hendersonville. 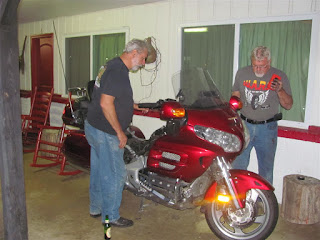 The evening fire was excellent as usual. I finally retired to our room to sort photos and make a preliminary post. Sandy came soon after and we were in bed before 11:00 PM. Another good day. 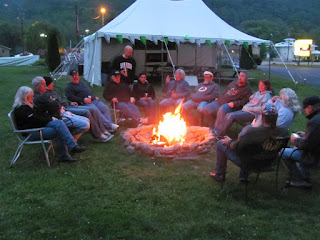 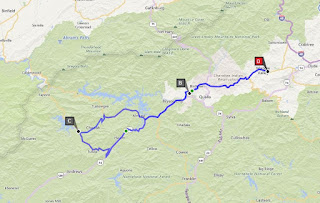