I was up at 7:00 AM after a night of tossing and turning. They had sausage and scrambled eggs with the hotel breakfast. Sandy didn't like to decaf so we stopped at McDonald's on the way out of town where I ordered her a coffee and muffin at the kiosk and got it right.

We set out on Highway 403 at 8:45 towards Hamilton under cloudy skies. The temperature was a brisk 2C but it felt like -3 according to the weather channel. The Lincoln Alexander Parkway allowed us to avoid the Burlington Skyway and took us to the Queen Elizabeth Way towards Niagara. 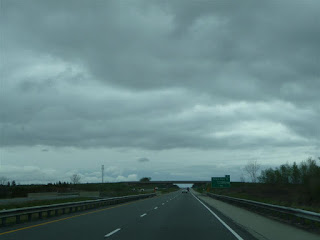 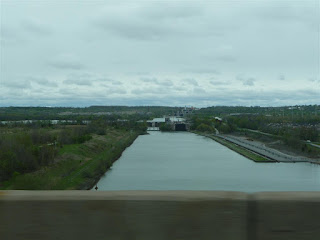 We made a quick stop at McDonald's in Fort Erie to use the facilities, switch cell phones, set up the new three-axle EZ Pass and dig out the Nexus cards. There was absolutely no traffic at the customs booths entering the USA from the Peace Bridge. We drove right up and were welcomed to the USA after only two questions. Traffic was very light as we bucked the headwind westbound on the New York Thruway. We started to see patches of blue but the temperature only rose to 46F. 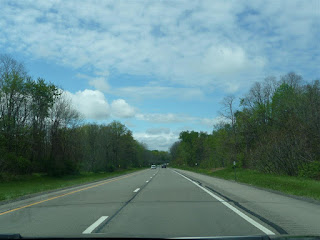 Some blue sky on the Thruway 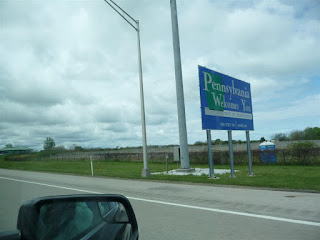 As we approached Erie, the blue skies disappeared and we started to see some ice pellets. The traffic getting off I-79 at Peach Street was crazy but we made it to WalMart, where it was actually snowing on us. The reason for the stop was to see if I could get a Tracfone SIM card to put in my Nexus 5X phone so I could use it in the US instead of the flip I had. Beth from the electronics section installed the card but the setup phone call referred her to a human being and told her it would be a 30 minute wait. I decided to call Tracfone after we stopped for the day so we took the kit with us.

We picked up a sandwich to go from the in-store Subway before leaving. Kal served us. He was from Kuwait and said he likes Canadians because things are busier when we are around. 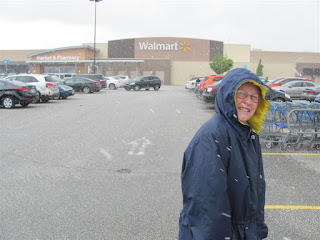 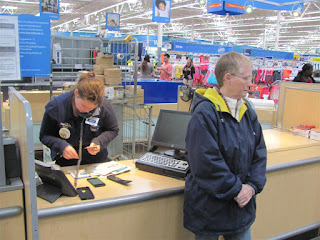 Beth working on my phone

Whoever designed the WalMart parking lot traffic flow in Erie was an idiot. Multiple directions and no traffic control. Not even a four way stop.

We headed south on I-79, soon stopping at Exit 166 near Edinboro for fuel. This exit has lots of facilities and no congestion so I may use it in the future. We encountered more snow squalls as we moved south. I expect these will be over before Don rides his motorcycle south next week.

We stopped at the rest area south of Grove City so I could walk around for a few moments and shake off the fatigue. This was a problem yesterday and again today. It didn't take long to perk up but I really would like to find out why this has been happening. 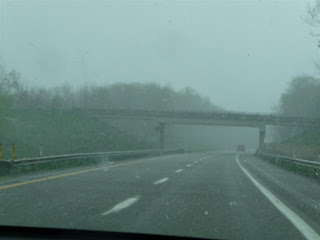 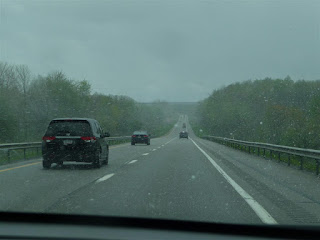 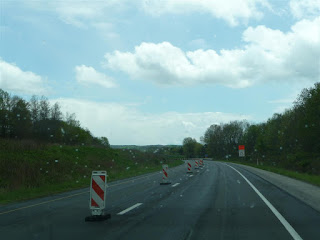 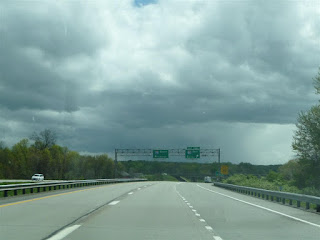 With more squalls on the horizon 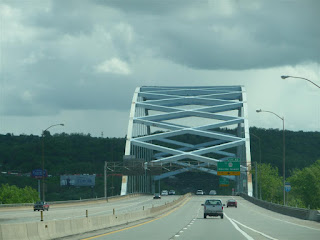 We stopped at another rest area south of Pittsburgh for one more quick break. A lady from Texas mistook me for a trucker and asked for directions. Luckily, she was heading for I-68 out of Morgantown so I was able to provide them.

I tuned the XM radio to the NASCAR race from Dover, Delaware. One of my tasks this morning should have been to check my Fantasy League drivers after qualifying to see who would be active and who would sit on the bench. I forgot. Traveling along, I could not even remember who I had chosen earlier in the week. The race sounded like a demolition derby so I feared the worst.

The Hampton Inn in Waynesburg, Pennsylvania is a little hard to find. You turn into a shopping centre lot and the hotel is on the other side. We arrived about 5:00 PM and checked in to our King Suite. This room was huge and very well appointed. The Freedom Riders are booked in here as well on their trip down next week. I hope they like it as much as we did.

Amazingly, all my default NASCAR drivers survived the wrecks and did well. I won the week and jumped to second place in the standings, right behind Sherm. That just goes to show that skillful management is not a prerequisite to success. 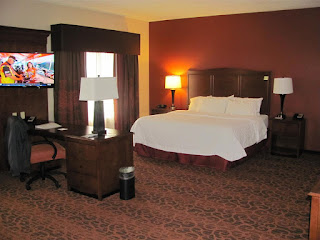 The king bed and desk 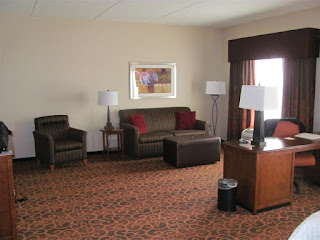 A call to Tracfone got me a pleasant young lady who told me that Beth had put the wrong SIM card into the phone. In the course of sorting out having the wrong SIM card, the lady gave me a new phone number while transferring my minutes and days. Then it turned out I could not transfer my old number without a new SIM card. We decided that we now had a new US phone and would notify folks of that fact.

After all these gyrations, my blog time was gone. I had transcribed my notes, sorted the photos and posted the bills so I decided that was enough and turned in to read my Kindle for a bit before going to sleep. 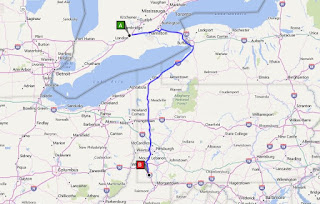