Sandy and I slept in until 7:30. I didn't get yesterday's blog finished before we left at 9:00. It was a bit chilly but would warm up as the sum got higher.

We headed for Cherokee where we fueled at the BP station and then rolled out of town to the beginning (or end, if you prefer) of the Blue Ridge Parkway. As we approached the turn, we came up on a slow moving Indian followed by a Harley trike. You think that they might have looked in their mirrors as they made the turn onto the Parkway and, given their snail's pace, pulled over for a moment and let us by. Nope, which forced us to pass them on a solid yellow line.

The next thing we caught up to was a GoldWing trike towing a trailer but it was moving fast enough to keep us happy until we all caught a slow moving pickup towing a trailer. This gentleman pulled over at the next overlook to let us by and the Wing left us at Soco Gap. 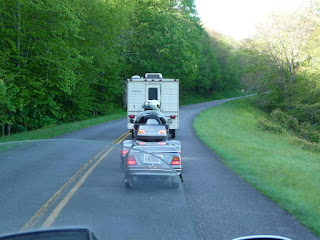 What you don't want to follow on the Parkway

Waterrock Knob has bathrooms so we stopped there. Just as we were getting ready to leave, the Indian and trike putted up and parked. They studiously ignored us until we pulled out. 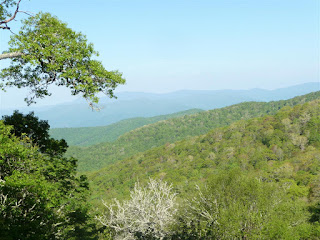 At the Richland Balsam Overlook, the highest point on the Blue Ridge Parkway, a German gentleman now living in Florida and his lady took a picture of us with the quilt Ruth made. Don acquired it at the Freedom Riders Kris Kringle Party. 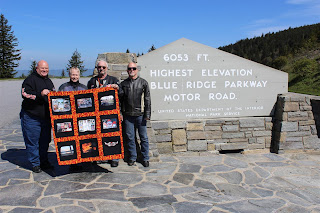 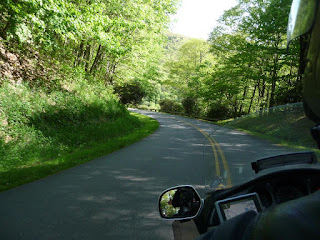 The next stop on the Parkway was the store at the Pisgah Inn. A couple of us had coffee and sat in the rocking chairs for a while. It was a very pleasant place to rest for a few moments. 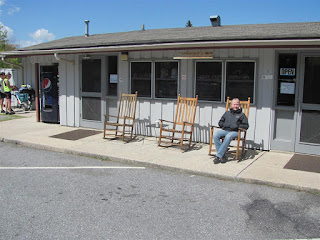 Sandy at the store at the Pisgah Inn 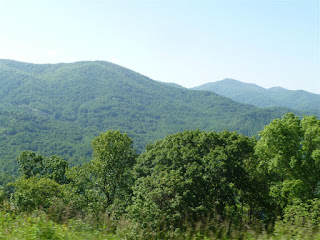 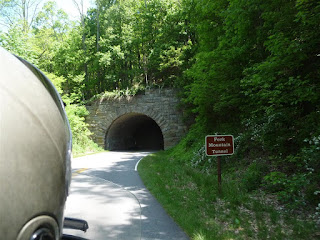 One task I had accepted was to go to Asheville and get some baseball paraphernalia for my son-in-law, Tom.The GPS took us into Asheville on the BRP and had us follow 25 north all the way through town to McCormick Field. In retrospect, we would have been better to get off at I-26 and follow I-240 around. The Tourist Trap store was very nice and a very pretty young lady helped me find the things Tom had ordered. 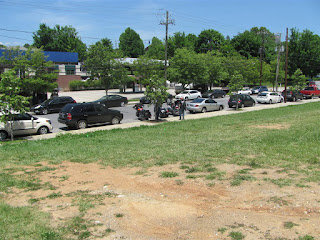 The gang waiting for me at the stadium in Asheville 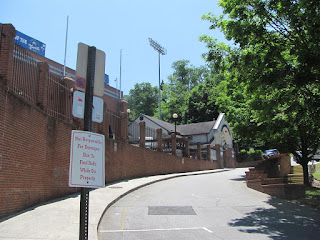 It was up to 30C as I led the way to I-240, which flowed right into US 74a. The ride over the Eastern Continental Divide at Gerton was challenging as always. We descended to Bat Cave and on to Chimney Rock where, creatures of habit that we are, we had lunch at Genny's. 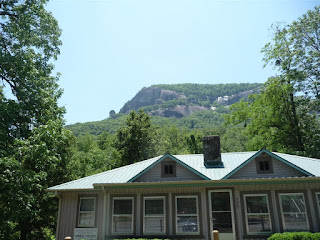 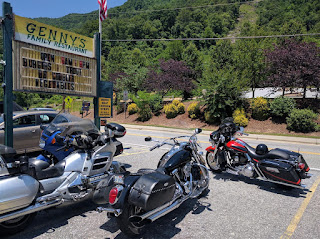 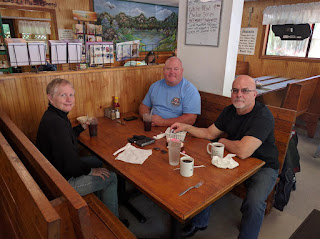 There was a slow (Ford) truck ahead of us on the climb out of Bat Cave on US 64. Too bad because this road flows. We went through Hendersonville at what must have been early rush hour and stopped in Brevard for fuel. I couldn't remember having been on NC 281 before so we followed 64 and then turned north to give it a try. The first section is nice and the end, where it meets 107, is very nice. The middle part is rough pavement with more than a little gravel on it through tight turns and severe elevation changes.

We saw a couple of US Army Chinooks go over at low altitude while we were on 281. You will have to accept my descriptions because Sandy didn't take any photos from Chimney Rock to Sylva. At one point, the bike twitched and she told me she had fallen asleep.

Approaching Sylva, traffic was getting heavy. I saw a sign for NC 116 and remembered Blain had mentioned this was a bypass to the town, so I turned left. It was a nice little road that came out on US 441 just below US 74. We followed the big road back to Whittier and Two Rivers. 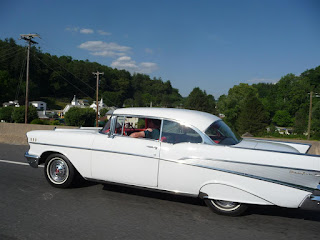 We got in after 6:00 PM, making it a long day. 231 miles in the mountains is quite a distance. We piled into the car and drove to the Bar-B-Que Wagon in Bryson for (you guessed it) BBQ. 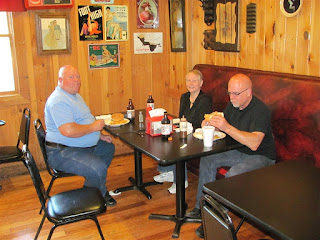 After supper, we explored some of the town I haven't seen before. Then it was back to the motel where we didn't stay up too late. 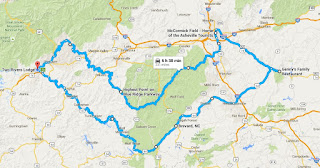