We had intended to travel down to Woodstock a couple of weeks ago for grandson Jasper's 2nd birthday party, but we had to cancel so we could be at Normie's funeral. After talking to Heather, we decided that Easter weekend would be a good alternate date.

Before we get into this trip, however, I guess that I should bring you up to date on a few things. Around the middle of the month, we hit a warm spell the likes of which I have never seen before in March. The snow, which had accumulated a couple of inches a day since Christmas, melted with a vengeance. This was compounded by a few days of rain. All that water had to go somewhere, and a lot of it made it to our weeping tile and outdoor sump.

The sump pump I replaced last year after the broken water main flood started to lose effectiveness and soon wasn't keeping up with the inflow. (I took it apart later and found the plastic base that channeled water to the outflow hose had a large crack in it). Remember my brand new first smart phone? The one I got in late January? In the course of getting the new pump positioned, I dropped my new phone down the hole into a couple of feet of water and wasn't able to recover it for almost 24 hours. It did not survive the ordeal. Luckily, I had taken Google Protect coverage which will replace the phone up to twice over the first two years for any reason (for a deductible). I filed the claim on a Sunday afternoon and had a replacement by Tuesday noon.

Since then, pumps and phones have been working well but I do need to contact some professionals to find out the best way to permanently fix the sump/drainage issue. At the same time, we have retained a contractor and decorator to do some renovations to the main floor, mostly paint and trim along with some needed repairs plus a new bathroom. The basement will be gutted. Outside, in addition to the sump, I need a new concrete floor in the garage and a paved driveway. It should be a busy year so stay tuned for updates on our progress.

OK, enough of the catching up. As I mentioned, March has been exceptionally warm. That, of course, was bound to run out and it did. The forecast for today called for a severe snowstorm in the Sudbury area and freezing rain in southern Ontario. Lucky us. The marginal weather was compounded by the fact that, for some reason I can't fathom, I did not get to sleep last night. At all.

So here is was, Good Friday Eve. I packed my gear (Sandy has been packed for a couple of days) and loaded everything in the Equinox. We stopped for fuel and food on the way out of town and were rolling just before 10 AM. The sky was overcast and the temperature was 24 F but, so far, things were pretty good.

We weren't twenty miles south of town when the first flakes started to fall. As we went on, it started to stick to the road a bit but we still had adequate traction. We caught up to a slow moving Chev Traverse which I was happy to follow despite the growing line behind us. On a day like this, you never see the black ice until you are sliding sideways, so it pays to be cautious. 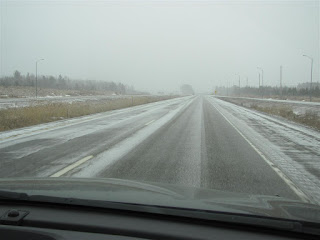 The snow starts to stick a bit 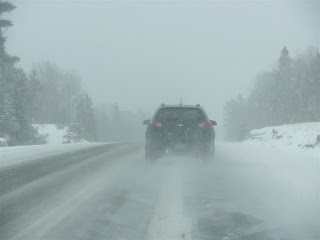 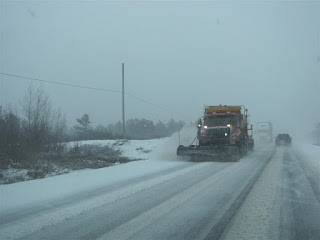 The wind was out of the east the whole way, a sign that bad weather was coming. Worse than we already had. The single lane of traffic at the French River Bridge was not an issue because there was no traffic. The detour around construction at the Key River wasn't a problem, either. We followed the Traverse until we got to the four lane north of Parry Sound, where everyone picked up the pace and started passing. 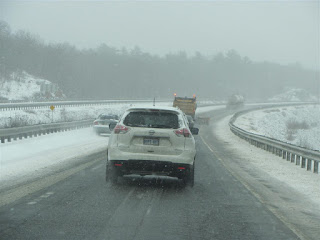 We stopped at the Seguin Trail Tim's where there was more snow on the ground. The radar looked worse ahead. Continuing on, the snow changed to freezing rain but it didn't seem to be making the road much more slippery. Someone missed the northbound exit ramp at Highway 12 and another car was off the road in Barrie with a lot of body damage, but that was all we saw. Near Barrie, the rain stopped and the roads got clearer until we stopped at the new On Route Service Centre at Innisfil.

Here, it was slushy enough I changed my shoes for boots before getting out. Inside, Sandy got a Tim's pulled pork sandwich while I got a new chicken/bacon/ranch wrap to go. The prices were higher than at home due to it being a service centre. Captive audience. Before we left, I scraped the ice off the wiper blades. 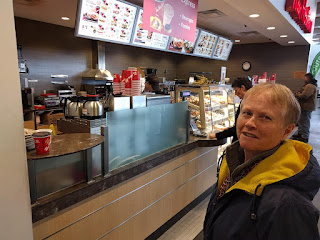 Sandy at the Innisfil On Route

While we were in the service centre, it started to rain again. Still, the road was clear and so I decided to take a chance on the 407 toll road. 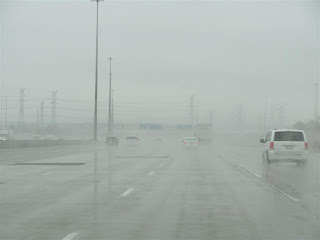 Once on the 407, the rain eased up but fog set in when we reached the 401. I lost sight of all landmarks as we approached Milton and this held all the way until Cambridge. Still, everyone was behaving themselves and we all got along just fine.

In Cambridge, one low lying spot on Franklin had a lot of water in it. I watched the cars ahead of us go through before trying it myself. We pulled into Kim and Mike's driveway at 3:35.

Mike was nominated for an award, so he and Kim were going to a dinner. He didn't expect to win but they were going to get a $100 a plate meal out of it so it was a no-brainer. We were going to watch Jolene and Robyn for the evening, giving us some grandchild bonding time, before heading on the Woodstock for the weekend.

After some discussion, we decided to head out to Tony's Family Diner on Franklin. There were only a few other people there so we were seated and served in short order. The kids had chicken nuggets and fries, Sandy had a Caesar salad with lots of chicken and I had beef barley soup and a BLT. 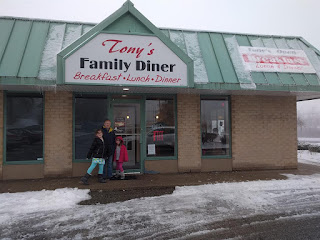 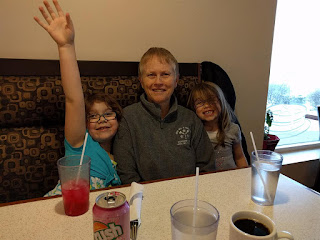 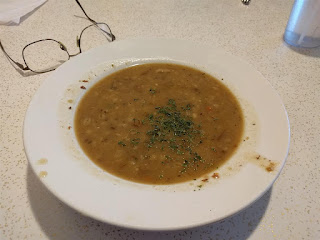 It was pouring rain after supper, so we went right home. The girls watched a little bit of TV while I dozed in the easy chair. Then it was off to bed. My daughters were both raised in a secular household but now both go to church, so I read Robyn the story of the loaves and fishes from her book of Bible stories. I tucked her in and then I went downstairs. As a result of no sleep the night before, I immediately fell asleep for the night. 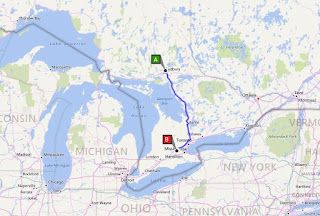 Stressful driving conditions; happy that the drive to Kim and Mike's house was without incident.