After almost six months of staying in Sudbury, we were now heading south for the second time in two weeks. This time was to attend grandson Jasper's fifth birthday party in Woodstock. True to form, they were predicting not one but two "snow events" in southern Ontario over the weekend.

We left town just before 10:30 AM under partly cloudy skies and clear roads. Sudbury was approaching a record snowfall season, which would mean that over thirteen feet of the white stuff had fallen. Snowbanks were high but highways were clear and what clouds there were dissipated before we got to Parry Sound.

Before wed left, I had signed into the library and downloaded Robert Heinlein's Assignment in Eternity to my phone. This audio version of some old and somewhat dated tales by the master was narrated by Bronson Pinchot (remember Larry's cousin Balki Bartokomous?). When the phone was paired to the Equinox's entertainment system via Bluetooth, the dashboard buttons usually controlled the play/pause functions. Imagine my consternation when they did not do that today. I don't want to be touching the phone to control it because the penalty for distracted driving now included a three day driver's licence suspension in addition to a hefty fine. I pushed play on the phone and let it go. 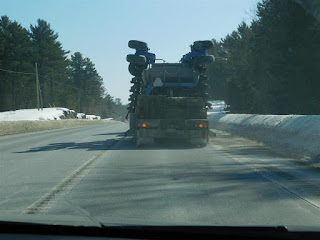 Seen north of the French River - no idea what it was

We stopped at Parry Sound to pick up lunch at Mickey D's. The sun was high in the sky and snow was melting, making it feel like spring was close. I searched on-line for any information on the phone/infotainment centre interface. I wish that people (and businesses) who post technical advice would date the post or mention what software version they are using. Even Google and Facebook forums are woefully inadequate in this regard. I tried deleting and re-pairing the device but that didn't work, so we headed on.

There was a stop at the Moon River truck pullout to add windshield washer fluid. The Equinox does not have a low fluid indicator, so the tank will always run dry at the least opportune moment.

The infotainment system finally lost the phone book as well, so I got off at the Duckworth exit in Parry Sound and found a parking lot. Again I unpaired and paired the phone with the car and, wonder of wonders, everything started to work right. I thought I did the same as I did in Parry Sound, so I have no clue what fixed the problem. By the way, gas at the Shell there was $.959 per liter compared to $1.109 in Sudbury this morning.

To try something different, we exited at 88 and then took 27 south to Highway 9 in Schomberg. There was almost no snow on the ground down here. We did find a Lexus and a Mercedes that seemed to like cruising the rural roads at 20 KPH under the posted speed limit and we noted that the Country Style Donuts outlet in Schomberg was closed down. Country Style makes donuts the way Tim Horton's used to before Wendy's bought them out and ruined the baking process, but they are slowly disappearing despite having what I consider to be a better product.

From Highway 9, we took the usual Airport Road/ Highway 24 through Guelph, where the car told us that the ambient air temperature was up to 34 F. 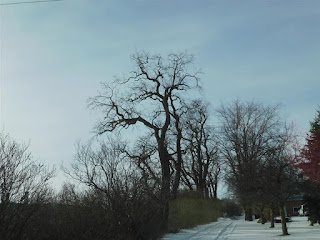 A tree between Guelph and Cambridge

Leaving Guelph, we got caught in a rush hour traffic jam on the two lane road. The Maple Grove cutoff that went past the Toyota plants took us to Highway 401 at Highway 8, missing what was usually a big tie-up and eternal road construction on the 401 through Cambridge.

We got into Woodstock just before 5:00 PM, the end of a good day on the road. Although there was still a little snow on the fairways at Cedar Creek Golf Course, there were also hundreds of Canada geese. I guess they got back early. With the mess they make, I have to wonder if starving countries in this world might be interested in some goose meat protein?

After checking in to the Best Western Plus, I checked my blood sugar. It had been a bit out of control lately. Now, after two Sausage McMuffins about 10:00 AM and a Double Quarter-Pounder With Cheese after noon, I was surprised to see it was 5.6 (101 in US measure). I wish I could figure out why I sometimes get surprises like this so I could do it more often.

When Heather, Tom and the grandkids got home, Sandy and I went by Subway and picked up supper on the way to the house. She got a sandwich and we picked one up for Heather, while I ordered a chopped salad with steak. After visiting for a while, we went back to the room for the night. 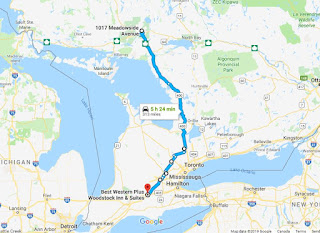