Things were interesting this morning. We didn't want to start too early due to the dire forecasts last night, so we didn't get up until 9:00 AM. Environment Canada had issued three separate warnings overnight. The first, before dawn, was for freezing rain. The next, a while later, was for high winds. The last one, not long ago, was for fog. Word from Sudbury was that rain had fallen, the side streets were like skating rinks and maybe we should wait a day before coming back. Kim said a Sudbury pastor that they knew was live-streaming his morning service so his flock could stay safe at home.

With these scary harbingers of doom to consider, I checked the trusty weather radar. Taking everything into account, I predicted we would run behind the rain front all the way, getting to Sudbury before the temperature dropped below freezing and the snow began. It looked about as optimistic as we could have hoped for and, even if it did turn nasty,  there were many places along the way that we could go to ground if necessary. We had decades of experience driving in winter conditions and my only real fear in bad conditions was the other driver.

I decided to avoid the 401, always a good plan in marginal conditions. We left at 9:30 and headed northeast on Highway 24 through Guelph. There was even less snow in the fields than there was on Friday. 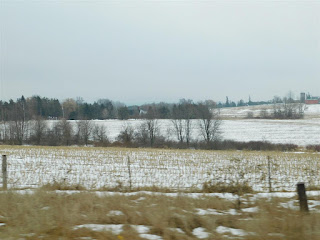 It was 42 F as we stopped for coffee in Erin and, soon after, we encountered fog. Canadian federal regulations require daytime running lights on all cars and trucks, so every Canadian vehicle should always have some lights to the front. As usual, we met more than a few running through the fog with no lights whatsoever. I have not figured out how so many vehicles on the road today do not conform to the federal standard. Provincially, there is no requirement for headlights to be on in the daytime, so drivers do not risk being charged under the highway laws. Still, common sense dictates that you want as much light showing as possible when visibility is limited.

On the other end of the spectrum, there are those who run fog lights 24/7. In the soup today, I did turn the fog lights on and appreciated the extra coverage they provided. 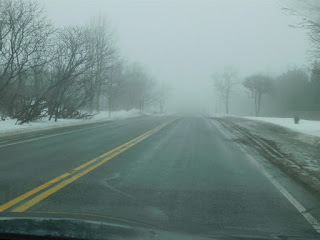 Fog varied from this to a lot thicker

Near Mono Mills, I almost had to take the ditch when a driver came out of the fog passing another car on two-lane Airport Road. I am not sure what he was thinking but, as I said earlier, I always fear the other person. The fog continued along Highway 9 but cleared by the time we turned north on six-lane Highway 400. 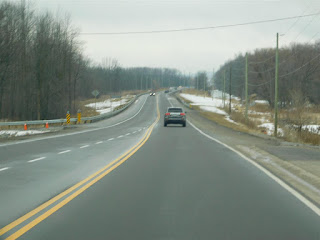 We stopped about 11:30 at the On Route service centre in Barrie for a bathroom break and more coffee. Radar showed that it was raining to the north of us, while the forecast predicted snow starting in Sudbury about 5:00 PM. Lots of time to cover the 180 miles before then.

There weren't many skiers at Mount St. Louis. Around Waubaushene, a light rain started falling. It was actively raining by the time we got to Parry Sound but the temperature was still 40 F so the roads were OK. A crew with a backhoe was cutting drainage channels through the snowbanks on Highway 69, a sure sign of spring.

Rain was heavier at the French River and we saw contractor plows on the four-lane with the blades down on bare pavement. The one on the lfft was scraping snow off the centre bank and depositing it in the roadway. I often shake my head at what they are doing with our taxpayer money. Water had pooled in some low spots but it was easy to avoid those spots because there was always at least one clear lane. 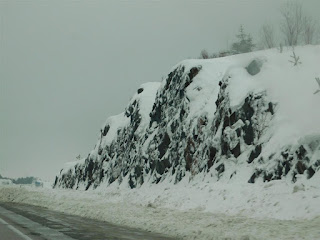 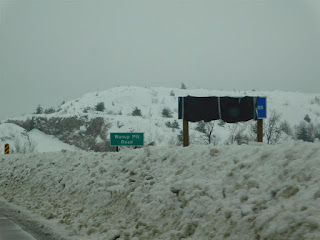 It was still 36 F when we reached Sudbury. Despite all the warnings, it turned out to be a pretty ordinary trip. We were in the driveway before 3:00 after braving water and slush ruts in our subdivision. Next week, we will head down again for Jasper's birthday party.

(Waiting for Monday to come back would not have been a good idea. Conditions were bad enough to trigger a 70 car pile up on southbound Highway 400 south of Barrie, resulting in closure of the whole highway in both directions.) 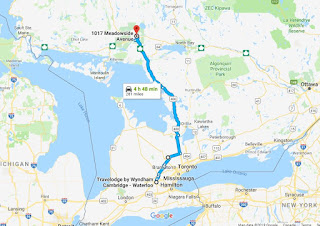