The Coldest Night of the Year Walk wasn't until this evening, so we were in no rush to get up. After rolling out of bed at 9:15, we called Heather and arranged to meet for breakfast at Dean Michael's Griddlehouse in Woodstock at 10:00.

We arrived just after Heather and the grandkids. Tom was busy with something at the church. Michael's was a little busy, so they opened the far room for us. 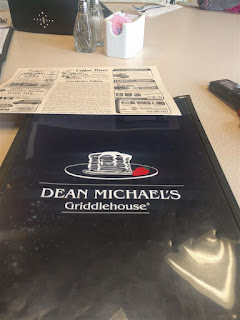 Recommended for breakfast in Woodstock Ontario 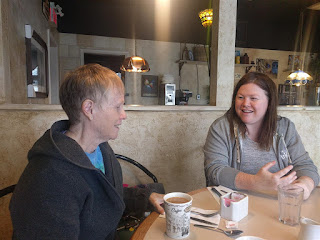 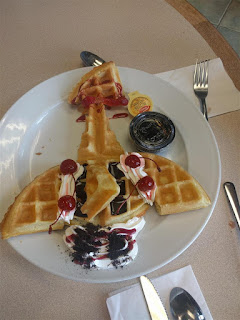 It's not just a waffle 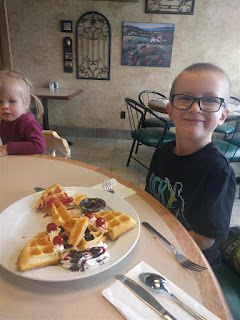 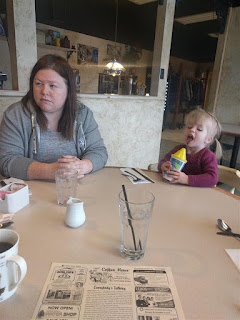 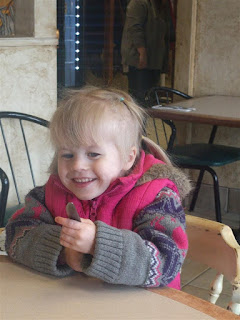 Breakfast was excellent as usual. Afterwards, we went back to Heather's house for some grandchild time. We would be coming back in a week for Jasper's birthday. Then we headed back to the Travelodge in Cambridge for a nap.

After heading over to Kim and Mike's for 3:30 PM, we then followed them to The Vineyard Church on Elgin Street where many of participants had gathered. Our team was from Cambrian Community Church and Kim, our captain, registered us and picked up our toques. There was also a CONY walk in Sudbury the same night, but Sandy and I were more interested in supporting the family.

While waiting, I met Kathryn McGarry, the new mayor of Cambridge and a former Minister of Transportation under Kathleen Wynne. She was surprised that we would come all the way from Sudbury for the walk. I mentioned my time working with MTO to revise the Motorized Snow Vehicles Act back in the day. She was a nice lady, I guess I can forgive her for being associated with Ms. Wynne.

With all the snow at home, it had not occurred to us that we might be able to walk in shoes so we didn't bring them. They would have been a lot more comfortable than boots on the walk. After opening ceremonies at 5:00 PM, we started out on the 5 kilometer route. The 10 K was the same but kept going after the turnaround point. 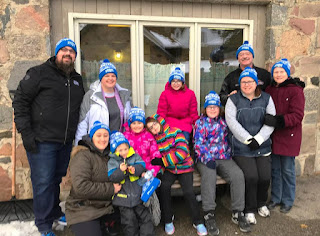 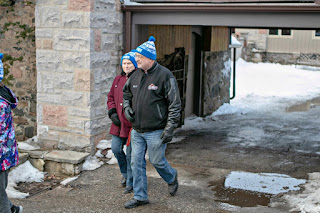 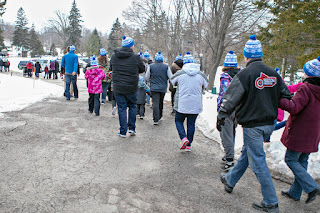 Much of the route was on dry sidewalk but there were some spots where ice was still built up. Sandy hung onto my arm since she was sporting her new cast and had fresh memories of slipping and falling. The mood was generally upbeat and jovial with all these folks really buoyed up about helping the less fortunate in their community. 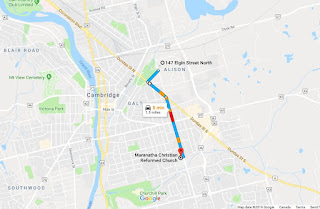 
The turnaround point for the 5 K walk was at Maranatha Christian Reformed Church, also on Elgin Street. They had coffee, hot chocolate, water and snacks available. Suitable refreshed, we started back. It was dark by the time we arrived (still in last place) and were treated to some hot food and a variety of delicious looking desserts.

According to the scoreboard, team CCC raised $1,750. A total of $36,430 was raised by 132 walkers on 19 teams to support the Urban Hope Centre. There was a lot of prayer that was outside my normal Deist frame of reference, but I judge people based on intentions and sincerity and both were good here.

We got back to our hotel room by 8:00 PM with plans to head home in the morning. There were dire weather warnings for tomorrow, with local forecasts of freezing rain and then snow. We set the alarm and turned in early, planning to decide what to do after we saw what the morning really brought.