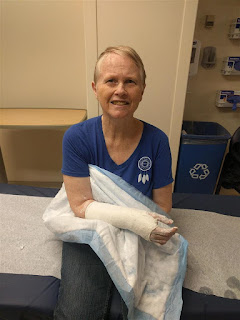 It started on the weekend when a light drizzle fell and then froze. I walked out gingerly on Monday night to place our blue box and garbage at the end of the driveway for the Tuesday morning pickup.

Tuesday afternoon, Sandy grew impatient waiting for me to collect the empty blue box and garbage can. While I was napping, she ventured out to do the job herself. Unfortunately, she slipped on the ice and fell backwards. She knew her arm was hurt, but went ahead and retrieved the containers and then got the mail as well anyway.

When I woke up, she told me what had happened. Her right wrist hurt but there was no obvious deformation and she also had some pain in her right shoulder. At suppertime, the pain in the shoulder had abated but the wrist had not so we decided to go and visit  the folks in the Emergency Room at Health Sciences North.

The admitting and triage folks took care of her relatively quickly and we were soon ushered into the ER proper. There is a lot of talk about hallway medicine in Ontario, where patients needing admission exceed the rooms available, so they wait on gurneys in hallways, lounges and anywhere else they can find to put them. The ER sure was overloaded this evening, with more than one patient to an examining room, parts of corridors screened off and gurneys in the halls. We were shown to a small waiting area packed with people cradling injured limbs. It seems Sandy was not the only one who slipped on the ice this day. (The count proved to be 42 fractures due to slipping on the ice throughout the day.)

We spent a few hours getting to know our fellow patients. Eventually, Sandy and I were shown to a private examining room where we waited for another while as we watched nurses, orderlies and the odd doctor come and go outside the door. The wait actually did not bother me since I know that people are seen in the order of urgency, and we were low on that list.

Eventually, a young resident came in, took a history and did a preliminary examination. She said someone would be by to take Sandy for X-rays and ordered something for pain. After a nurse had taken Sandy for the X-rays and then returned her to the examining room, the resident returned with Dr. Bourdon. He was the former hospital Chief of Staff and was now Vice President of Medical and Academic Affairs. He was also the doctor who handled Sandy's pulmonary embolism back in 2009. He said the break was not severe and then he coached the resident on how to apply a plaster cast. She booked an appointment with an orthopedic surgeon in the out-patient clinic tomorrow morning for follow-up.

We headed home and set our alarms for the next morning.
Posted by Jim "Skid" Robinson on 2/13/2019