For people who like to wander a bit, we had certainly not been doing that lately. In fact, we were not out of town since we got back from the Arkansas trip last September. Time is flying by because, in some ways, it seemed like that just happened yesterday. This was alarming when one stopped to consider that this was the rest of our lives sliding away.

Daughter Kim, son-in-law Mike and the girls usually participate each winter in the Coldest Night Of The Year walk in Cambridge. CNOY is a Canada wide initiative which raises money for local programs that support vulnerable families and individuals. Sandy and I normally donated to Kim and Mike's team, which represents their church, but decided that we needed a road trip. The walk was on Saturday but Mike informed us that Jolene and Robyn would also be participating in the Galt Schools’ 89th Annual School Skating Races on Friday night. A twofer.

We usually stay in Woodstock when we are down but decided to try a Cambridge venue this time. I wanted to build a few more Wyndham Points but had not been pleased with the Super 8 last time. The Travelodge on Hespeler Road had good reviews and reasonable rates, so I reserved for Friday and Saturday nights.

It should be noted that Sudbury was experiencing an unusually severe winter. We had the coldest temperatures seen in years, coupled with over ten feet of snow and very little thawing. After fueling up and going back home to get the voice recorder I had forgotten (showing how rusty I was regarding trip preparations), we hit the road about 9:40 AM. The temperature was around 26 F, so the snow was not as crisp as usual.

The trip was uneventful. We stopped for lunch to go at McDonald's in Parry Sound and then again for a bathroom break at the service centre on Highway 400 in Innisfil. Nobody noticed that I had to do up the button on Sandy's jeans because of the cast on her wrist.

Once we got onto Highways 9 and 24, it was evident that the south had a lot less snow than we did. There was a shiny layer on top showing that their last precipitation was probably rain. The old Eddie Shack coffee place in Caledon was now a Tim Horton's. Poor old Eddie, gone and forgotten. We stopped at the Tim's in Erin for more coffee.

Lesli phoned me about some Safe Ride Home business and I marveled that I could be anywhere in North America and a caller would not know that I wasn't sitting in my living room. There is so much technology these days like cell phones, computers, GPS, digital cameras and so on that was barely even contemplated when I was in school. But I would have to think long and hard about whether it is better or not. I guess it would depend on who you are and what you value. 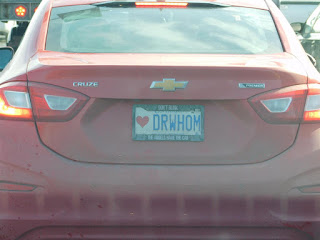 We arrived at the Travelodge about 3:00 PM. It was an older building but the desk clerk was very friendly and the room was recently remodeled. There was a real Indian restaurant attached but, not being familiar with real Indian food, we decided to avoid it until we could find a guide familiar with the cuisine. Instead, we took a nap until race time.

Mike said they would be getting to the Galt Arena Gardens about 6:15. We were a few minutes behind them, so they saved a parking space right behind them. It looked like a lot of people were arriving.

I need to say a few words about the Galt Arena Gardens. It is reportedly one of the oldest continually operating ice hockey arenas in the world. It opened in 1922 and was renovated in 1997. It makes me sad to think that our own stately Sudbury Community Arena, built in 1951, is slated for destruction and replacement at a very high cost to taxpayers. I wonder how much an upgrade would cost? The Cambridge Skating Club has been teaching figure skaters in the Gardens since 1951. Neil Carpenter, Toller Cranston and Ron Shaver all got started here and, if I remember correctly, my brother Doug studied there with Carpenter for a few summers in the 1970's. That was before he traded in his skates for a guitar. 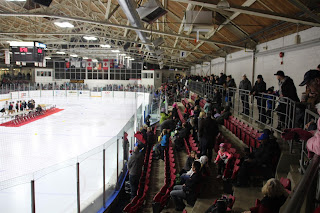 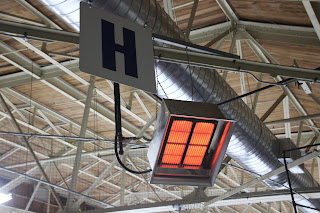 Catalytic heaters for the spectators 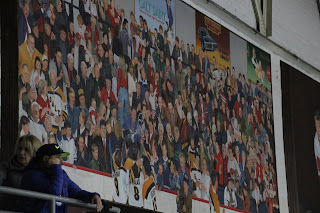 One of many murals depicting the arena history

This school race has been going on for 89 years. There were elementary school age kids in skates everywhere. The principal of Chalmers Street Public School was issuing numbered jerseys to each of his students, including Jolene (28) and Robyn (4). There were many individual and relay categories divided by age and gender. Each of the girls would compete twice, first individually and then as part of a relay team. I took photos as best I could, considering there was a net meant to stop errant pucks between the lens and the ice. 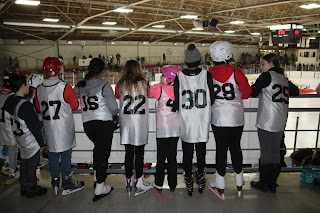 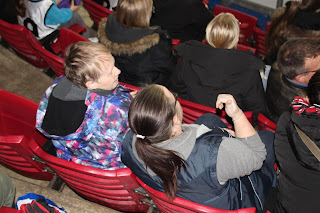 Mom and Grandma settled in to watch 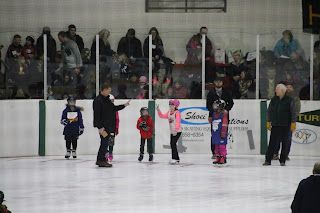 Robyn (in pink) set to start her race 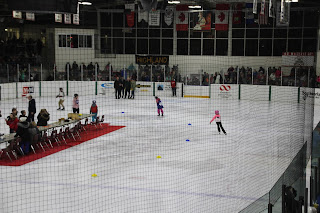 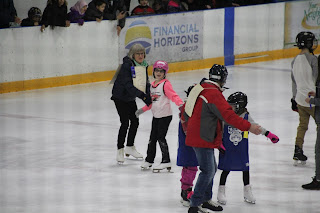 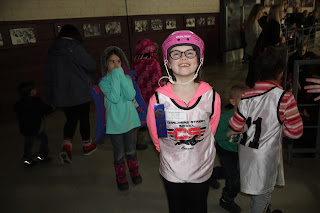 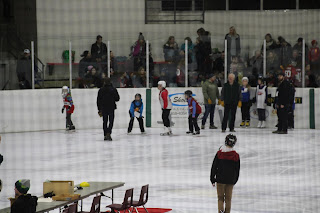 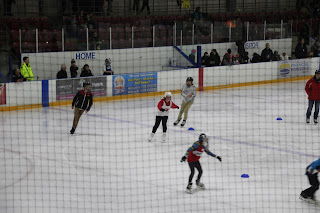 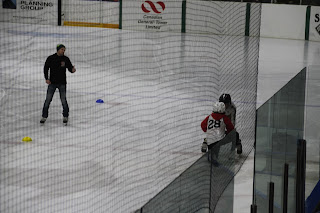 Until she caught an edge

Then it was time for the relays. 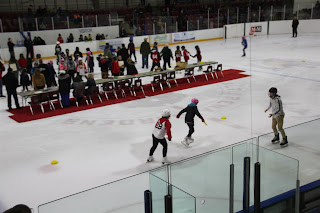 Jolene about to pass a competitor 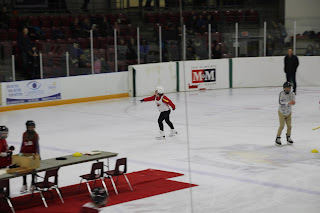 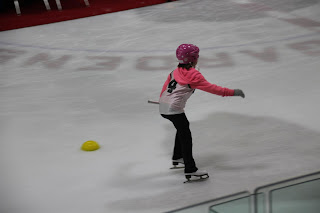 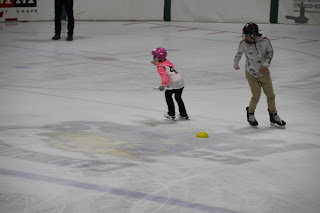 And rounding the turn for home 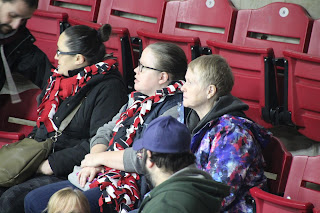 After the skating was finished, we all headed up Hespeler Road to the State and Main Kitchen and Bar to get some supper. It was my first time in a State and Main, a southern Ontario roadhouse style chain. The food was good but I wish I could have stuck to my diet. Oh well.....

After supper, we bid adieu to the family and moved the short way up the road to the hotel. Tomorrow would come all too soon. 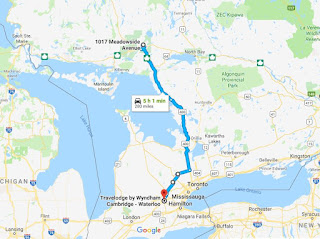