We headed over to the hospital early enough to get a parking spot in the closest lot. After proceeding to the proper Ambulatory Care Unit waiting room, we took a number and were seen by the admitting desk right away. Then we got comfortable, talked to some of the folks we had met the night before and met some new people. Most had fresh casts on because this was orthopedic clinic day in the ACU and yesterday was icy slip day.

The first time Sandy was called, it was to meet with an osteoporosis advisor. This nurse's job was to interview more mature people who had sustained fractures, explain the risk osteoporosis risk factors and suggest mitigating strategies. She also offered to schedule a free bone density scan, which Sandy accepted. It is nice to see some preventative measures being practiced.

Back in the waiting room, we watched as people were called in one after the other. Eventually, Sandy was called again and another history was taken by a nurse. From there, it was across the hall to X-ray and then back to the big waiting room for yet one more long wait.

Finally, we were called for the final time and escorted to a room in the back that was subdivided into four examining areas. Dr. Tubin, the surgeon, looked at the X-rays and said there was a crack in the radius and a small chip in a wrist bone but no surgery would be required. He also asked if the arthritis in her thumb caused and trouble. Sandy said she wasn't aware that she had arthritis so, no, it wasn't a problem. Tubin has a five star rating, unusually high, and his folksy manner (unusually in a bone doctor) has to be one of the reasons. He told one of the people following him that the wrist needed to be re-positioned and said he would see her again in three weeks.

I don't know if the people who apply the casts are nurses or technicians, but they are good. This one cut off the plaster cast and quickly applied a fiberglass replacement. Given a choice of colours, Sandy picked pink. We booked another appointment here for three weeks hence, said goodbye to our new friends and headed home. 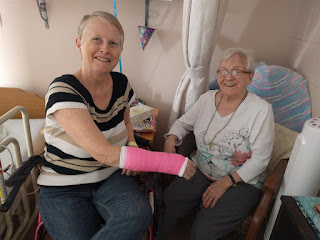