Fishing Lake Saskatchewan - A Quiet Sunday At The Lake

I was awake at just after 4:00 AM again, cursed with having a brain that thought it was over 1,000 miles east of Fishing Lake, Saskatchewan. After burning some data catching up on news from the outside world, which did not improve my peace of mind, I switched to my Kindle until the ladies got up.

One of the most disturbing things in the news was a report that seven members of a motorcycle club comprised of United States Marine Corps veterans had been killed in a head on crash with a pickup truck on a New Hampshire highway. When Sandy and I were at Laconia in 1978, we were diverted off a road because a pickup truck had veered across the centre line and hit multiple motorcycles head on, causing a number of fatalities. Having witnessed the result of that carnage from the adjacent road made this tragedy hit home. Rest In Peace, fallen riders.

My affair with the Boston creams yesterday did not sit well with my glucose levels. Two of them plus bread, potato chips and not enough water pushed it to 15.9 (286 for you American folks), the worst I have seen in a while. Time for me to get strict with myself. I didn't help this by having toast for breakfast, even if it was whole wheat. I will shape up when I get home.

Focus and large amounts of my pay-as-you-go phone data allowed me to finish the blog posts for Friday and Saturday. Hallelujah!!! I vowed never to get behind on the blog again, knowing that I would probably break my promise to myself by tomorrow morning.

Jan needed help with moving a fire pit at the train station. Then she introduced me to the fire table in the gazebo. It was a Canvas (brand name) table that had originally come from Canadian Tire. She bought it second hand but had not set it up yet. Unaware of my limited mechanical abilities, she asked if I would help get it going. Sure, it's only a propane appliance. What could go wrong??

A fire table is a propane appliance that people can sit around and watch the flames dance in the middle of the table, sort of like a BBQ without the cooking. The gas comes up through burners under lava rocks or, in this case, glass particles, fed from a standard propane gas bottle hidden in the base.

The gas bottle was hooked to the regulator which was hooked to the valve which was hooked to the burners. After leak testing with soapy water, we moved on. The copper line from the thermocouple to the safety valve was also already connected. Where the plan fell apart was the igniter. Although the electric cables to the pit were there, the igniter was absent. Downloaded instructions said it should have had a button, a battery and a wire. Nope. Not to be outdone and because built in igniters are for sissies, I proceeded using a manual BBQ igniter Jan found. Turning the valve on high, I held it down while clicking the igniter. There was a whoosh and blue flames leapt up around the glass pieces. I held the button down for a couple of minutes to let the thermocouple inform the valve there was heat, and then released it. The flame kept burning. Success!! Then I shut it off and we bolted the table top to the base. 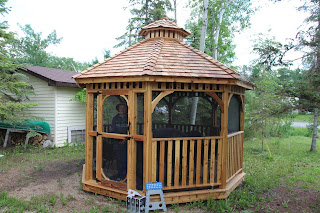 The gazebo is a pleasant place to hang out 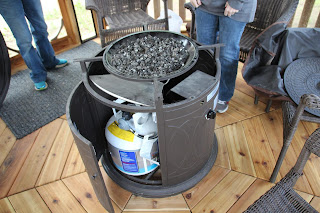 The fire table as I was introduced to it 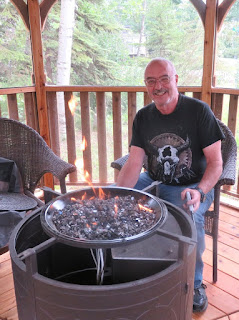 We have flames
Photo by Jan Palmer 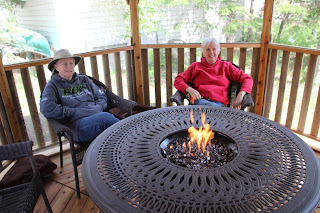 The next project was to install a string of LED lights around the inside of the gazebo. Jan did most of this with Sandy's help. The string was just long enough to fit around the upper walls of the octagonal structure using clips provided by a neighbor. 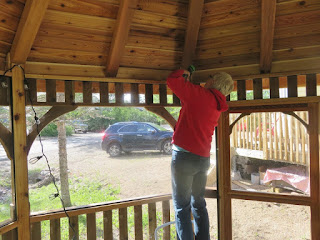 Jan had been talking about taking us out for supper but there was still a lot of food left over and we would be leaving in the morning, so we had sandwiches, salads and (unfortunately for me) Boston creams. 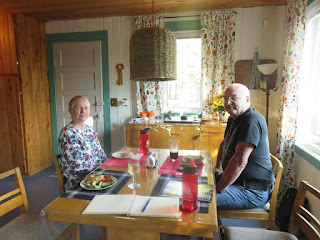 Supper at the familiar old table
Photo by Jan Palmer

As the sun was setting, we walked over to the waterfront and enjoyed watching it slip below the horizon. 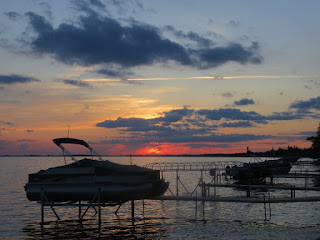 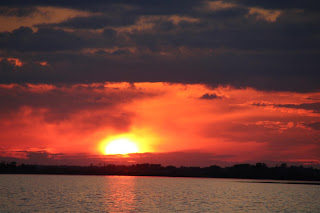 Fire in the sky

Back at the house, we sat around the fire table for a while and enjoyed our last night at the lake. Jan will be going to Vancouver and then driving to Fort McMurray before returning here in a couple of weeks. We will be back, too. Count on it. 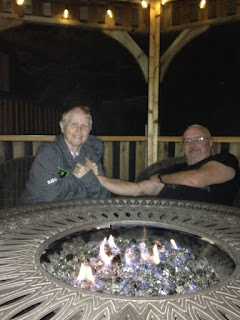