There was a full moon, a strawberry moon to be precise, last night. Sandy blamed her lack of sleep on that. I think her problem was just overload from all that had been going on plus preparations for the upcoming road trip taking Jan back to her place on Fishing Lake, Saskatchewan.

The day started with appointments for both Sandy and I with our GP. The quarterly visit went well and he did not prescribe any changes to our prescriptions. This was important because our Out Of Canada medical insurance has a six month stability clause on pre-existing conditions, and a change in a medication is considered an instability.

Medical insurance is a major concern for anyone traveling outside Ontario. The Ontario Health Insurance Plan covers any care in accordance with their reimbursement schedule, which is much lower than what US health care facilities will charge. Travelers can buy insurance for specific trips or annual coverage based on different durations. Sandy and I had annual insurance coverage for as many trips of less than thirty days as we could manage with TD insurance, but they cut me off at 65 because someone with a heart condition, high blood pressure and diabetes was just to big a risk. I took individual trip insurance last year but that was inconvenient because it removed spontaneity as well as costing more. This year, our agent Ken Jones found an annual Blue Cross policy for both of us that had very few questions and covered 31 days at a time. A plus was that Sandy's coverage cost less than her TD policy. This policy would kick in July 1st.

On the way back to the house, we stopped and visited Sandy's Mom Janet and her roommate Pearl at the nursing home. Di and Malcolm's Jan stopped by as well.

At home, we took care of some chores and packed all our gear in one suitcase. This was a new idea to cut down on luggage. The downside was that shared space requires negotiation but I think we got it done quite well.

With everything loaded, including some items Jan was taking back to Saskatchewan, we hit the road at 1:45 PM. Right off the bat, Sandy was disappointed to find that McDonald's had discontinued her beloved cranberry-orange muffin and replaced it with strawberry. She said the strawberry was OK but not as good as her favourite.

The trip to the Soo was uneventful. Having Jan along was interesting because the discussion of various things kept me awake. Usually, Sandy nods off and I try not to follow suit.

We arrived at the Microtel Hotel on Great Northern Road around 5:30 PM. I called my brother Rabbi because I had a few legal documents I needed to give him and he met us at Wacky Wings, which was just next door. 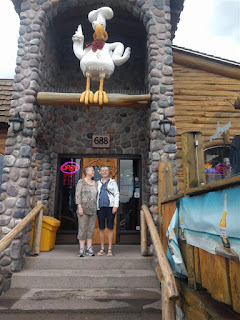 Jan and Sandy On The Road - Day One

Unfortunately, I didn't get a picture of Rabbi. Then again, he generally prefers to avoid the limelight and doesn't even have a Facebook account. Sandy liked the marinated breaded chicken wings at WW in Sudbury but was disappointed with them today. I had a passable chicken Parmesan sandwich. Jan had a veggie burger but they screwed up the order by adding sauce, so she sent it back. Not all franchises in a chain are equal.

After supper, we said goodbye to Rabbi and walked back to the hotel where I looked after the usual end of day chores. Transfer the photos from the cameras to the computer, sort them and delete duplicates and any others that don't pass muster. Record the daily expenditures. Transcribe the notes from my voice recorder. Copy the map of today's travels to the blog. By the time this was done, it was time for bed.

Tomorrow, we will head around the north side of Lake Superior to Thunder Bay, 440 miles away. 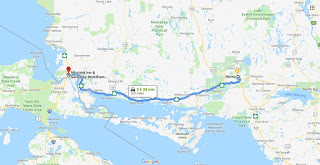