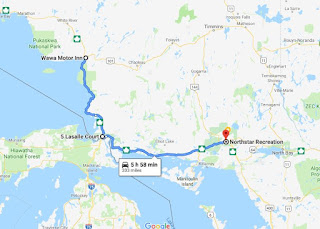 My watch alarm and Siri (Zeke is an iPhone guy) woke us at 6:00 AM sharp. There was no dew on the bikes but The Weather Network now said that rain would start in Wawa about 9:00 AM and the Soo about an hour later. Oddly, it rained for a couple of minutes as we were loading the bikes. The weather radar showed a storm going through the Soo about now but nothing for when the rain was predicted. My contempt of weather forecasting services remains intact.

The motel offered a hot breakfast, so I had sausages and scrambled eggs. Then we stopped at the Wawa Goose on our way out of town to pay our respects and Zeke checked another thing off his bucket list. 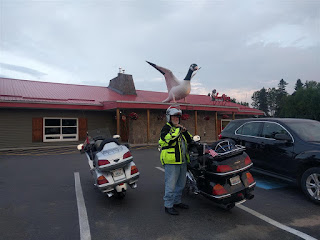 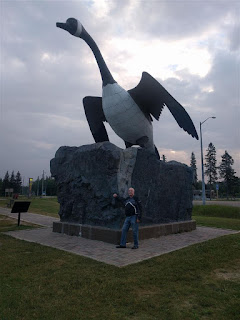 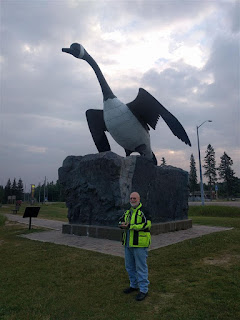 Zeke and the Goose

The skies were mixed as we hit the road by 7:00 AM sharp. It spit on us from time to time and we got a few miles of real rain around the Montreal River. Moving along at 60-65 MPH, we saw very little traffic and no wildlife. The first vehicle we did catch up to was a VW Westfalia with an obligatory peace sign and a Minnesota licence plate that said RELAAAX. Go, Sodbuster.

We just missed the pilot vehicle at the ongoing tar snake initiative, so we got to talk to the flagger. This was their last day on this job, which was why they were working in the wet. Their next job would be somewhere near Espanola. I went to check my Email on my phone (since the bike was turned off) but there was no signal. 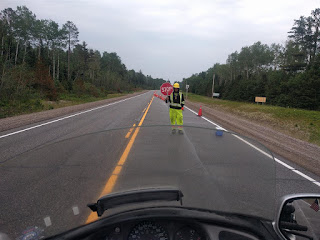 We did stop at Chippewa Falls for a photo op. The plan was to check out the historical plaque about the Trans Canada Highway but I forgot. Rabbi said he would be home and that it was dry in the Soo. 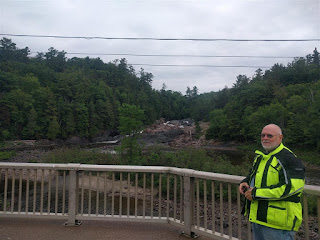 We arrived at Rab's place at 9:40 and he put some coffee on. Rabbi got to meet another VROC friend and Zeke got a glimpse into my family. Around 10:45, we left and I escorted Zeke to the International Bridge back to the USA. He was moving on to Manistique, Michigan for the night. I pointed at the bridge plaza and waved goodbye. Later, Zeke texted and told me he made a wrong turn and ended up at the gate of the former Algoma Steel plant. He said he could see the bridge above him and was able to find his way back. 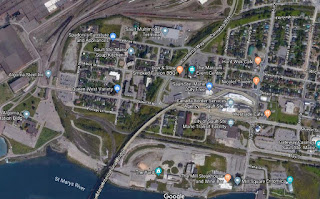 International Bridge and the steel plant

I turned onto Bay Street, the eastbound four-lane thoroughfare that runs counter to downtown Queen Street, and found it was severely torn up by construction crews. An adventure tour rider would have loved it. After fueling up, I got a coffee to go at McDonald's and found there was a phone call from Northstar Recreation in Sudbury. I was going to drop the bike off this evening for some maintenance work tomorrow, but they had a cancellation and wondered if I could bring it in today. I said I'd be there before 3:00 PM

Cruising east, I passed the laid back Westfalia one more time. The temperature got warmer as I moved away from the big lake and I was in a groove that I seldom experience any more. It was necessary to reign in the speed on a few occasions. Once again, my butt was complaining and I figure the only cure will be to ride more.

It was 2:20 PM when I rolled into the Northstar lot. I have dealt with Dave Bimm, the owner, since he was in charge of service at The Shop and I was still riding my GL-1000. It was a happy day when his Kawasaki dealership added Honda to their banner. 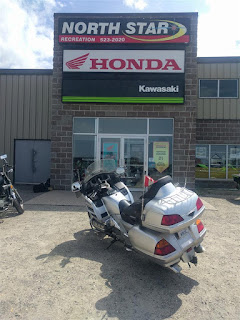 Into your hands I commend my motorcycle

What the bike did was new tires. Bridgestone Exedra radials have been my choice for many years. I also had a brand new final drive taken off a trike conversion that I paid $120 US for, because this is one item that does fail on the GL 1800. The single swing arm carries the whole bike on one ring gear bearing which typically goes at 100 K miles or less. Mine went at about 82,000 miles, so I wanted it changed as a precaution because the bike was now at twice that. Then there was the air filter (a nasty job that a Honda design engineer should be beaten for) plus changing all the hydraulic fluids and coolant. It was also almost time to check the valves, so this was on the list with a request to advise me of the clearances. The GL 1800 abandoned the hydraulic lifters of the 1200 and 1500 and went to bucket and shim valves. Checking them is recommended every 50,000 kms and I have had it done religiously. So far, they have never needed adjusting. Finally, I normally do the oil and filter changes myself but, since it was going to be in anyway....

This was going to be a big bill but the work should last for a long time.

I took my travel gear out of the bike and Sandy drove over with my oil (Amsoil 10W40) and the final drive, which she had wrestled from the basement to the car. After signing the work order, we drove home.