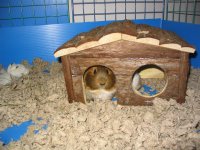 A cavy is another name for a guinea pig. Last spring, Heather got one and we built a 4 x 2 square cube and coroplast enclosure for her. Here, Penny is looking out from the safety of her little log house.

While she has been doing fine and growing by leaps and bounds, Heather figured that Penny could use some companionship. The one stipulation was that both be of the same gender to prevent unwanted expansion. While we were 99% sure Penny is a female, it seemed like a good idea to get a professional opinion.

We booked an appointement at the Preston Animal Clinic to get Penny and the new addition's gender confirmed and get a general checkup. Then we headed over to Pet Save, who have a good selection of supposedly all female GP's. After confirming that we could return it if it didn't prove to be female, she selected a small brown animal. The idea with a younger female is that it should be more submissive to a larger animal and simplify the establishment of just who the boss is. We took the new critter in its box and Penny in her travel carrier over to the clinic.

Jennifer Messer is the vet we got to see. Her manner with both pets and owners is excellent and she owns a variety of pets, including guinea pigs, herself. She confirmed that both patients were female and gave the new one a clean bill of health. The one wrinkle in the plan was that she suspected Penny might have fur mites. This is not serious and is treated with two injections of ivermectin ten days apart. The day after each shot, the cage and everything she might have contacted are cleaned with a mixtue of bleach and water. The down side was that the new pig, now named Coco, will have to remain isolated in the smaller pet store cage until the treatment completed.

After getting the pigs settled back in, we picked up Subway sandwiches and a couple of DVD's and then settled in for an evening at Heather's apartment.
Posted by Jim "Skid" Robinson on 8/29/2006