We arose late again. The usual breakfast was had at Grandma's and, when we got back to the campground, we found that Snake and KT had arrived from central Indiana on their Mean Streak. Rather than camp, they had found a motel room over in Honor.

About 11:00, Jack led us out on the day's tour. Ray took another small contingent on an adventure ride, but most came with us bound for the Old Mission Peninsula. This spit of land separates East and West Traverse Bays. We did well staying together as we circumnavigated downtown Traverse Bay. Going out the peninsula, Jack opted to take us off the main road and along the east shoreline. This is a very pretty ride. 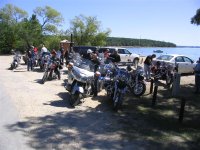 Out near the end, we stopped at Haserot Beach to get our bearings and take a few pictures. Then we completed the trip out, stopping at the Old Mission Lighthouse, which sits right on the 45th Parallel. This puts it exactly 1/2 way between the Equator and the North Pole. From here we started back down the peninsula, stopping for gas part way. The gas stop was the beginning of the end of our cohesive group.

Jack started the group out from the gas station after receiving a hand signal from the last rider that he interpreted to mean that all were there. It actually meant that they weren't all ready yet. Passing the gas station on the highway, we immediately saw the error of our ways. Unfortunately, the side road to the west coastline was right there, a hidden right down a hill. At the bottom, I made a U-turn and highballed it back up to the station. Two of the four riders were still there, but Leo and Flattop had already pulled out. I guess they were hauling down M37 trying to catch us but we weren't on M37. I took the other two down to the group and we enjoyed a winding, scenic ride back to the mainland. At the end, we rejoined 37, the only way off the peninsula and, as we turned right towards the city and the Leelanau Peninsula, there were Leo and Flattop.

When we turned right on M22, the road that goes around the Leelanau, a number of the group decided they were done riding and turned south towards Interlochen. As we headed north, we lost a few more on the way as they peeled off to find food. By Northport, Jack, Margaret, Snake, KT, Scotty, Marlene and Leo were about all we had left. We had lunch at a place that was going out of business soon and then started out of town continuing along M22. On the outskirts of town, Jack missed a turn and I became leader by default.

I had studied the map and navigated us down to Leland and then east on 204 and south on 643 to Cedar where we then followed 651 south to M72. This was a very pleasant ride and I didn't make a mis-step. Unfortunately, this was as far as I had explored on the map. But, when you are leader, you can never admit you don't know where to go so I faked it. At this point we were only about six miles from Interlochen but, with my attempt at dead reckoning, it took us almost 40 miles to get there. We zigged, we zagged, we went east, we went west. At long last, we came out on US31 way over by Honor and rode back to camp on familiar road.

The bonfire this last night was enhanced by the Perseid Meteor Shower. Snake and I, with Sandy, KT and a few others, watched the fiery trails across the sky and contemplated the nature of the universe. Snake told stories of Lakota Sun Dances. Oh yes, and we saw a UFO. At least WE couldn't identify it.

It started to get cool so Sandy fired up the ceramic heater in the trailer and we went to bed fairly early.
Posted by Jim "Skid" Robinson on 8/12/2006