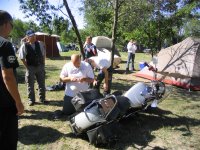 We awoke a little later than usual and a bunch of us headed over to Grandma's Kitchen for breakfast. When we returned, we were greeted with this sight. No, Flip had not crashed. This is the way he chooses to work on the underside of his bike when there isn't a lift handy. Flip works on his bike a lot. In this case, he was working on the oil sump screen while trying not to lose any oil.

A group of us set out for a ride led by Scotty, who took us around 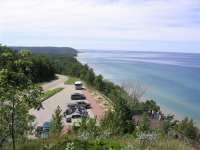 Crystal Lake and then south along the shore of Lake Michigan. Part way down, we stopped at the lookout at Arcadia Bluff. The view of the lake and sandy beach is spectacular even if we did get a good cardio workout getting up to the platform.

From here, we continued south to Manistee where we cruised through the scenic and historic downtown. On the other side, we came across a museum and the mouth of the harbour. We took time to wander around and admire the sights.

Leaving Manistee, Scotty took us on a tour around the town water tower. This wasn't the plan, but we were a little bit lost. On the main road, we rode up to Onalaska where we stopped for ice cream. From here, Jack took the point, Scotty was second and I was third. We were rocking and rolling through the limited speed curves at a good clip and I don't think any of the three bikes varied their position by more than a couple of inches. This was all fun until I looked back and saw the rest of the group was missing. Quick U-turns and a run back met them riding to catch up. It seems Marlene had gotten stung by a bee, but she was now back on track. Jack slowed down until we got to our gas stop in Frankfort. As we were maneuvering our way to the BP station, Jack managed to run over his own foot with his floorboard causing quite a bit of pain.

I now inherited the lead. We went back around Crystal Lake and continued on to Deadstream Road, where we cruised under a canopy of deciduous trees past camps until we got to Honor. From here, it was a straight shot east back to the campground.

A few of us who had missed the Hofbrau the previous day decided to give it a try. Despite the name, it isn't really a German restaurant any more. 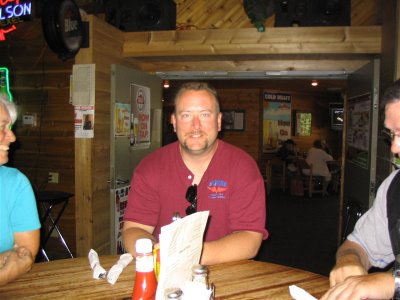 Furhead, an Interlochen regular from Wisconsin, found a friend at the Hofbrau 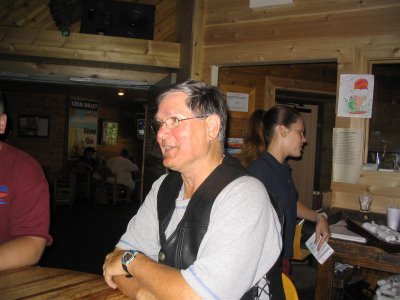 Leo is being his usual, jovial self 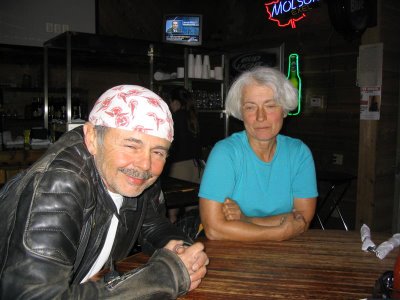 Scotty and Marlene waiting for food 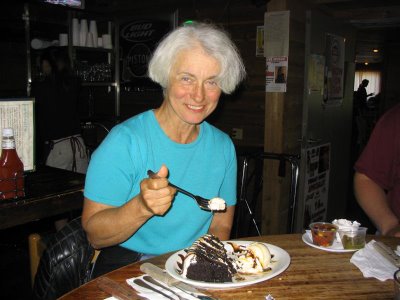 
After the Hofbrau, we got back to the campground and settled in for the bonfire. Tonight, we went to bed fairly early.
Posted by Jim "Skid" Robinson on 8/11/2006