For several years, the Michigan VROC crew, led by Brandon "Flip" Caldwell, has hosted a gathering at the Cycle-Moore Campground just west of Interlochen (near Traverse City). This is traditionally a small and informal gathering drawing riders from Ontario, Michigan, Indiana, Wisconsin and a few farther afield. The time to head back to Interlochen was upon us once again. This year Leo Laframboise, a long time riding partner, would be accompanying us to his first VROC gathering on his Nomad.

The trailer isolated wiring wasn't fixed because Bushtec inadvertently sent me a wiring sub-harness instead of a relay box, so I will be using hand signals for right turns for this trip too. I called and the correct part should be in soon after we get back.

It was raining lightly as Leo came by. Rain gear went on. Leaving town, we stopped for a few moments at the Chateau Guay Motel to say Hi to Ernie Duncan. Ernie is a VROCer who was on his way back to his home in New Hampshire. This was the first time we have met him, but it looks like we'll be seeing him again in the future.

We set out shortly after 8:00 down the familiar Highway 17 corridor to the Soo. The rain held off and the only thing of note was a transport in a pull-out on the outskirts of Massey surrounded by yellow crime scene tape and guarded by several OPP officers. (We later found out that the driver had pulled over and died of natural causes.) There was one coffee stop in Blind River and we arrived in the Soo about noon.

We stopped at Mom's house in the Soo for a short visit with her and my brother Dave, aka Rabbi. He's visiting from Edmonton for the month. Mom's going to have some surgery done next week and I decided to cancel the second part of this trip (Pennsylvania) so I'd be able to spend a few days down here.

Leaving Mom's, we started across the International Bridge to Michigan. They were doing some construction and traffic backed up so we spent about 45 minutes waiting in line to clear US customs. When we finally got to the booth there was, as usual, no problem. We hauled straight down I-75 to the Mackinac Bridge. As usual, the right hand lane was closed over the main span forcing us to cross on the dreaded steel grate lane. This time, though, instead of being consumed with fear and trepidation I sailed right over even releasing the bars to wave at riders going the other way. Not many waved back. We continued on I-75 to Grayling.

From Grayling, we wandered across M-72 to Traverse City. Unfortunately, the short cut I planned to take around the city was closed due to construction so we were forced to ride downtown with all the traffic. Out the other side, Interlochen and Cycle-Moore were just a short hop.

When we arrived at the camground, most were out to supper. Scotty and Marlene were still there and watched with amusement as we dickered over location before setting up the camper Then we pitched our tent which Leo was borrowing. We zipped down to Grandma's Place for supper and returned to find most of the people had come back from the Hofbrau. Flip and Renata, Jack and Margaret, Furhead, Flattop, Rainman Ray and Fireball Lisa and Bugsplat Ron. There were also newcomers Kevin and Sue.

The evening consisted of sitting around the bonfire sharing stories and then Shelby got out his guitar. He is really good and entertained us as the time slipped by. Bugsplat and Kevin really got into it. At one point, Rainman Ray reminded us that it was here a year ago when we got the call that Wolfman had left us in a tragic accident in Virginia. Shelby played Clap for the Wolfman and there were many tears. Then we tried to remember the verses of Amazing Grace and got stuck after the first. We turned in shortly after, but the songs and partying went on until the wee hours. 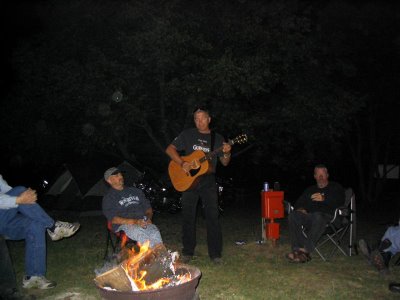 Shelby plays Clap for the Wolfman 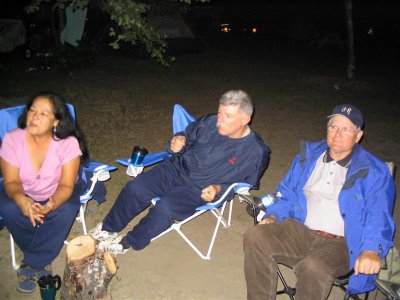