I may have mentioned Action Sudbury before. It is a Sudbury group started by former mayor Peter Wong back in 1984 to combat drinking and driving. Normie and Biker have been members for years and I have now joined them representing the Freedom Riders. I don't actually have to represent anyone to belong, but the club is very firmly against drunk driving. This only makes sense because drunk drivers will do a lot more damage to a motorcyclist that they will to people in a car.

Action Sudbury works on both education and supporting enforcement initiatives. We get funding from a number of sources including working at our local charity bingos. One aspect of the education component is to be visible at many local events. Today, we were off to Valley East Days in Hanmer to set our display up in the show in the Centennial Arena. We would use this as our venue to promote the idea of Safe and Sober Driving with anyone who would stop and listen. For enticement, we had lots of nice giveaway items. 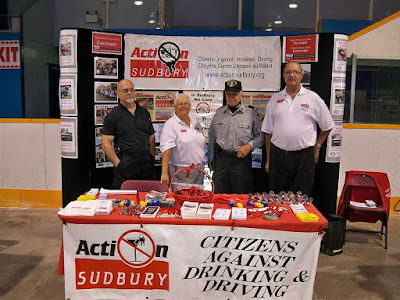 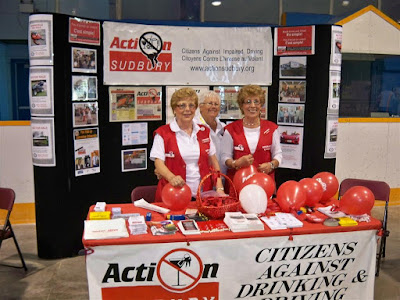 
One of the other displays involved a young lady selling vibration exercise machines. I just had to wander over during a quiet period and try it out. 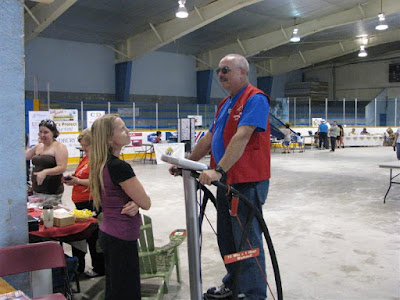 Shortly after noon, I got a call from Sandy. She had developed a cough over the last few days and was now experiencing sharp, stabbing pain in her chest whenever she breathed. Not wanting to take chances, I excused myself and headed home to take her somewhere and get it checked out.

Thinking it might be pneumonia, we stopped at the walk-in clinic that was adjacent to an X-ray facility. There was no one in the waiting room, so Sandy went right in. The doctor couldn't hear anything in her chest and the X-ray department was closed on weekends, so he suggested we go to Emergency.

The Emergency Room at the General Hospital has a new procedure. Instead of registering and waiting for triage, you take a number. They call you into triage and then register you. Sandy went in after only a few minutes and then never came out for a long time. When she did, she told me that they had done an ECG, X-rays and blood tests and we were now waiting for the results of the latter. We waited for a long time.

During our time sitting there, our neighbor Gwen's son Nigel brought his wife Maggie in. She was on her annual 100 Km bicycle ride to Killarney when she passed out near her goal. She had several injuries but was ambulatory. They needed to wait for results of tests to see if there were any additional injuries as well as to determine the cause of the blackout. We passed the time on the benches together (new ones and quite comfortable) talking about all manner of things.

It was several hours before Sandy was called back in. Shortly thereafter, Dr. Bourdon (former ER chief and now acting Chief of Staff, working ER in his spare time because he likes to) came out and led me back to one of the examining rooms. He thought it was probably a chest infection and prescribed antibiotics, but said that he wanted to be safe. In case it was a blood clot, he wanted a lung scan done on Monday. He also arranged for an immediate anti-coagulant needle just in case. With that, we left.

The last part of the evening was all too brief. Jacques (Trucker), a VROC friend from Quebec, and his daughter Julie (Pole Dancer) from Ottawa had come to town for a ride. They were staying at the Cardinal and Gary picked them up for a tour of town. We met them at the Tim Horton's on Lasalle where Sandy and I grabbed a bite to eat. They had never heard Stompin' Tom Connors song Sudbury Saturday Night so, as we hung out in the parking lot, I put it on the van stereo and gave them a treat.  Imagine hearing Sudbury Saturday Night for the first time on a Saturday night in Sudbury.  It was good to see the two of them. I was sorry we couldn't have spent more time together, but Jacques will be in Maine next week so we can have that long talk we have both been looking forward to. 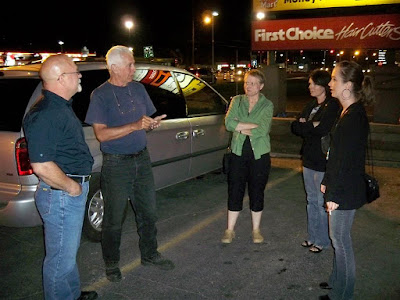 From Tim's, we headed home for an early bedtime.