It started out as a foggy Sunday morning, and I slept in until after 8:00 AM. Then I wandered over to the big tent for coffee, a bagel and some conversation with friends. A big topic was what would happen to Cyclefest next year, when the Waterloo Wings were supposed to be handing the organizing reins over to the Southern Cruisers. 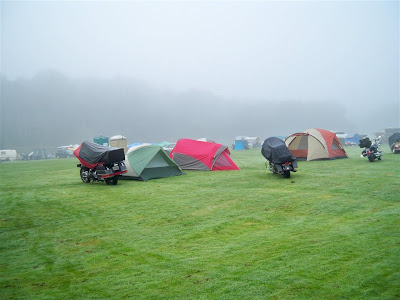 Foggy Campground or Brigadoon?
As the fog dissipated and the sun came out (can you believe more sun?) Kim and Mike showed up with Jolene. This was her first introduction to the motorcycle crowd and everyone made a big fuss. 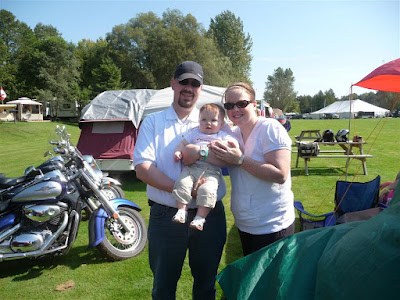 Mike and Kim with Jolene 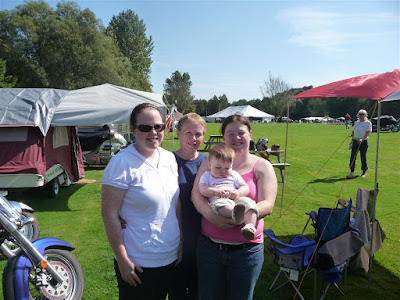 Jolene with Mom, Grandma and Aunt Heather
The bike never moved all day. Sunday afternoon, they always hold the field events so we settled in as usual. Everyone has a front row seat for the slow races, water balloon tosses, hula-hoop throws and other challenging games. Fun was had by all.
During the day, Heather, Tom and Sandy went down to the other end of the field for some photos in front of the famous covered Kissing Bridge. 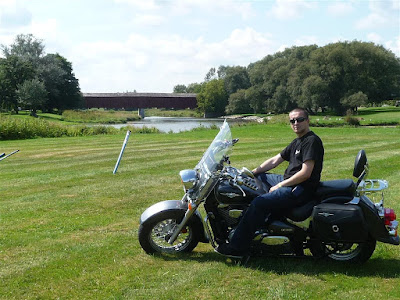 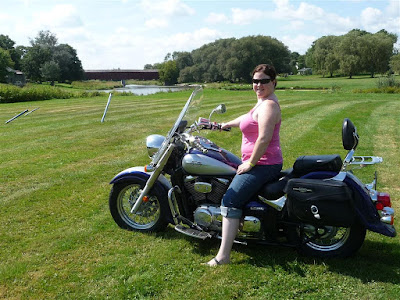 Appropriate, considering the background
The last night of the rally culminates with the banquet and the awards under the big tent. Ian fooled us this time by having us enter via the front side of the tent after those of us with experience were skulking around the back. Nice move.
The caterers were on time and the food was, as usual, excellent. We had roast beef, chicken, spareribs and a rolled rib concoction that is always a favourite. After the meal, we settled in for the awards. They gave out awards for the winners of the field events, poker run and observation run as well as recognizing the youngest, oldest and furthest.
Then they presented the attendees pins, significant because this was the 30th Cyclefest. As a special treat, these awards were given out by our dear old friend, Daphne, a regular from the good old days. Unfortunately, "she" isn't looking any better but you have to love the stockings:-) 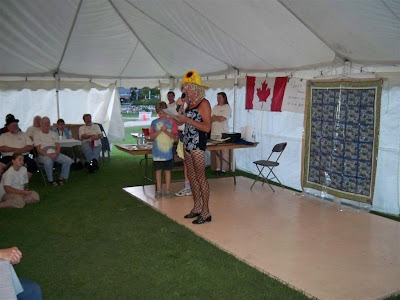 Daphne at the microphone
In fact, only Bob Collins from Oshawa has actually attended all thirty. More of us have made 29 and they were bumped to 30 by the committee, although they forgot Sandy and I during the presentation. No big deal, we know we were there and K&M promised we'd get the pins. The only Cyclefest I missed was when I went to the legendary VROC V2K in Durango, Colorado. That would be the same weekend Sandy and my Mom were moving the girls into their university dorm.
Next, Sandy and I were privileged to make a surprise presentation, at the request of Ian the Rally Chair, to Kevin (Daphne) and Maysey recognizing their roles in working on every one of the thirty Cyclefests. I'm not sure exactly what I said, but we all got choked up a bit. These folks are very special, great friends and loyal, steadfast club members.
Lastly, Rally Chair Ian got up to speak. He finally confirmed what some of us suspected, that the agreement with the Southern Cruisers to continue Cyclefest had not gone as they had hoped and the Waterloo Wings were retiring the event after thirty successful years. They hoped the SCRC would take over the weekend and the venue for an all new rally next year. We'll wait and see how things go, but we need our Labour Day gathering.
One strange thing happened after the awards as we made our way to the fire. I met two couples wearing 30 year pins. We had been sharing the same campgrounds for 29 out of 30 years and had never met before. They are from the Gravenhurst/Port Sydney area and I'll be sending them information on next year's Freedom Rally. The fire was kind of bittersweet as we knew that this was the end of an era. We talked about all the good times and what we might do in the future. Finally, I toddled off to bed about midnight.
Posted by Jim "Skid" Robinson on 9/06/2009