It was the first official morning of the rally so we had coffee, toast and bagels in the big tent.  Then we registered, getting our arm bands and goody bags.  Heather and Tom were going to a wedding and came all dressed up.  My plan was for us to hit the spectacular brunch at the Black Forest Inn before they had to go.  Heather and Tom will be getting married here in late October.  That went out the window when I was told I was expected to lead a group on the poker run. 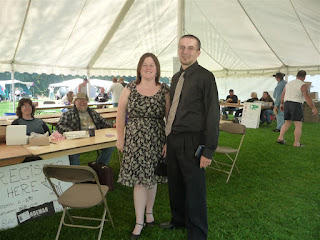 Heather and Tom all dressed up

So while the kids went on to savour brunch, I dialed in the GPS, registered for the poker run and assembled the troops.  The run was actually a poker/observation run.  The observation part involved looking for answers along the road to clues given on the route sheets.  Finding the answer was only part of it.  Then you need to reproduce it as faithfully as possible on the paper.  We won our share in the old days when Ray Snowden, the master of the observation run, was setting courses.  These days, we are old enough to let others do all this work.  The poker run was good enough for us.  But it wasn't a conventional poker run either.  In one of those, you get cards.  Here, Rally Chair Ian goes to Toys 'R Us and selects diabolical kids games for us to play.  Lawn darts, tennis balls, nerf guns, ring toss and pretty much every other game of skill are out there to be tried.

We had a good group for the run.  Fred on his Wing, Peggy on her Yamaha cruiser, Jerry and Keitha on their hog, Ed and Betty on their GL1800 and Rich and Lynn on their GoldWing trike.  After signing in and drawing a gumball from a little bingo device (points awarded based on the colour), I took the lead and we headed out on the day's adventure.

As leader, I now had two choices.  I could have Sandy tell me each turn on the well laid out route sheet and keep track of the mileages, allowing us to reach each checkpoint as intended.  Or I could look at the sheets and see if I could determine where the checkpoints were and take my own route.  I am not a conformist, so Plan B looked good to me.  Nobody else in our group was looking at their sheets anyway.  The rules don't say you CAN'T do this and, whatever is not expressly prohibited must be OK:-)

Before we got up to speed, we stopped in the very pretty subdivision right next door to visit Fred's special ladyfriend Ginger.  Fred and Ginger.  It actually took me a year to get it.  She would normally be riding with us but had just had back surgery during the last week and was recuperating at home.  It was good to see her, although we didn't stay too long because we didn't want to tire her out.

From Ginger's, I saw that the first Checkpoint was at Chicopee Ski Club in Kitchener.  Chicopee was significant in the history of Cyclefest because the rallies from 1980 until 1997 were held there.  There was some discussion about which year had been the last, but I know it was 1997 because that was the year I wrecked the GL1500 on the way home.  GoldWings can't really fly, especially when they go off a cliff.

At one point, near the Waterloo Airport, I came upon a right turn quite suddenly and signaled my intent to turn.  I looked in my mirror and saw Peggy, riding second, admiring the scenery and totally unaware of my intention to cut right across her path.  Discretion being the better part of not becoming a 911 call, I made an instant division to cancel my turn while indicating to the rest of the group where the turn was.  Peggy was soon back with me and we made a U-turn to get back to the rest of the gang.  I'm glad I looked back.

It was good to see the old ski hill again, even if the field we camped in was gutted.  I see they now have water slides.  The checkpoint was around the front and the challenges involved throwing disks and and other things at various hoops on the ground.  The smaller the hoop you hit, the bigger the score.  I didn't hit much. 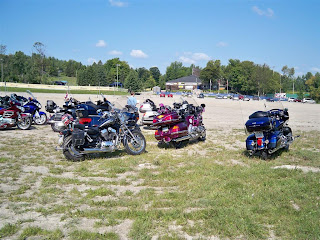 Bikes parked at Checkpoint #1 with Chicopee Clubhouse in the background 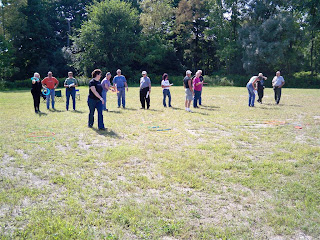 Our crew trying their hand at the games

From Chicopee, I scanned the sheet and saw the next checkpoint was at the Tim Horton's at the corner of Myers and Water Streets in Cambridge.  I knew a nice road leading there and ignored the route sheet.  We took King Street across the 401 to Fountain and went west to the traffic circle seeking Blair Road, the nice, winding route I wanted to introduce everybody to.  Murphy kicked in, however, when we went around the circle and the Blair exit was marked "Road Closed".  With tears in our eyes, we retraced our steps along Fountain Street, again passing a very raunchy dead skunk that we thought we would never see again, and reached our destination via downtown Preston and downtown Galt.  We reached the checkpoint before anyone else and confused the volunteers working there by arriving from the wrong direction.

After having some fun and scoring poorly at some more inane games, we stopped at the adjacent Timmie's (which is half way between Kim and Mike's place and the apartment building Heather used to live in), and had some wraps and stuff. 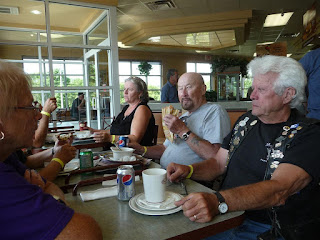 Jerry, flanked by Lynn and Ed, gives me the eye at Tim's

Betty is on the left 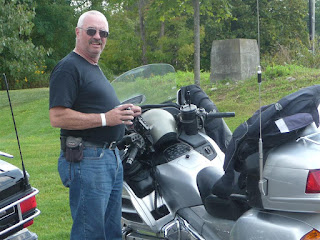 The fearless leader (who could lose a few pounds)

From Tim's, I led the group up Franklin and took them across Avenue Road, where there are some very fancy mansion type homes.  Then we headed up Townline and across the 401 on CR 32.  I didn't realize 32 went this way and now have a better shortcut to Kim & Mike's from Guelph.  We rode through Maryhill, went by the renowned Waterloo Region Model Railroad Club headquarters (they model the Sudbury Division of the CPR circa 1975 on a five level layout) and up to CR 86.  A left here took us right back to the campground, where we signed in and I made two more futile attempts to score points with a nerf gun and something else.  It spit a little rain just after we got back.

The ride over, we settled in for a quiet afternoon visiting and socializing. 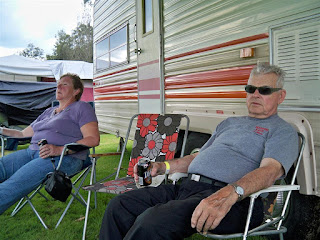 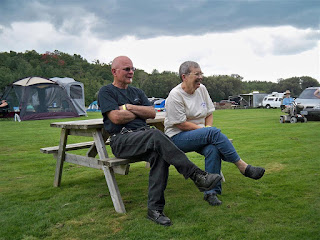 For supper, we listened to a recommendation made by fellow Freedom Riders Jack and Cathay.  They suggested a place their lovely daughter works in Alma, Marj's Village Kitchen.  Sandy went with Maggie and Joe in their van while Peggy and I rode.  Alma is a crossroads, and Marj's is not well marked.  The sign is even parallel to the road, which makes it hard to spot.  But the locals know it. 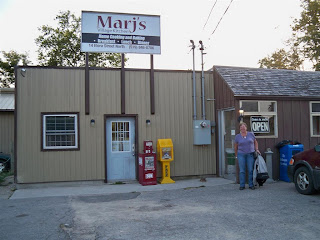 Peggy in front of Marj's in Alma, Ontario

While we were waiting for a table Gabby and Mabel (who have been eating all their meals here since they found the place) arrived with a lady friend.  When they gave us a table for six, we offered Gabby's friend a chance to sit with us, which would  make it easier for Gabby and Mabel to get a table for two.  Sure enough, they got it right next to us.  The food was great, the prices were reasonable and the server was fun.  They have an attached bakery but I was a good boy and didn't bring any treats home.

After we ate, Maggie, Joe and Sandy headed out.  Peggy and I waited a bit for Gabby to ride back with him and spent time talking to the owners of several old cars who had stopped in to eat. 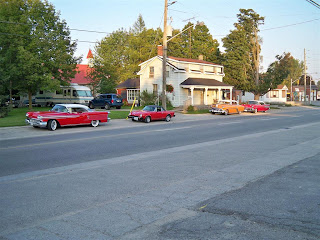 On the way back to West Montrose, Gabby led.  He missed the turn to Elmira and we took a detour through Floradale.  Not a bad ride.  We got back in time for hot dogs and corn (like we needed any more food) and the evening entertainment, an ABBA tribute band.  We listened a bit and then adjourned to the bonfire for some camaraderie.  As the evening wound down, the fog started to roll in.  I made my way to bed about midnight.

The Supper Run to Alma