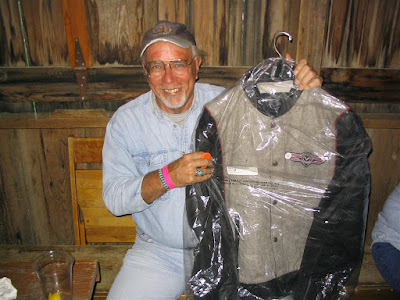 '57 Dave - Luckenbach Texas - April 2005
We got word via Joker on the VROC newsgroup that '57 Dave, from Florida, died in a motorcycle accident in Indiana. The details aren't important except to say that Dave and a friend were riding down the road when a fluke chain of events caused a vehicle to cross the centre line and hit him. Dave was 70 years old.
Dave wasn't an official VROC member but he was Joker's regular riding partner. We first met them at the same time at SEVROC in Suches, Georgia back in 1999. I remember sitting around the bonfire where Dave mentioned that he graduated from high school in 1957. Judge piped up with "1957? I was BORN in 1957!" Thus, he became '57 Dave, the Harley guy who rode with Joker.
Dave rode to Texas with Joker in 1995. The last night, Joker said they would be leaving early in the morning so he took me up to their room to say goodbye to '57. This underscored why one should always knock, because we caught Dave changing. I could have been spared the sight of his skinny butt in those jockey shorts.
The last time I saw Dave was in Kentucky at WWR in June. I didn't recognize him at first because he had cut what was left of his hair really short. We didn't get much time to talk this time but always figured there would be time later. It goes to show that you just never know.
'57 Dave may not have had an official VROC number but he was every bit as much a part of our family as everyone else. Rest In Peace, David Small. We'll miss you.
Posted by Jim "Skid" Robinson on 9/13/2009