This was a late morning. I slept until 7:30 and, by the time we got loaded, checked out and grabbed a quick McDonald's breakfast to go, we didn't hit the road until 9:00 AM. It was overcast and 58 F with a light fog in some places. The GPS said we would be home at 5:02 PM. 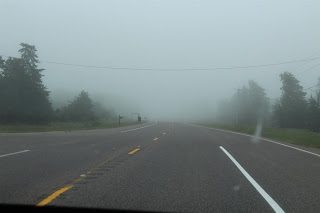 Through early morning fog I see... 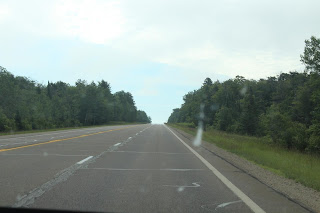 And then some blue skies 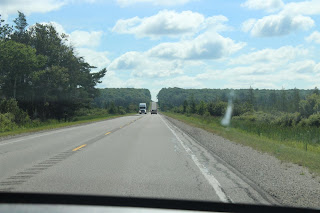 Michigan 28 is not known for its curves

There was not much traffic in the UP this Sunday morning. We stopped at the Newberry turn off for fuel and coffee. We also found a cranberry orange muffin at the McDonald's for Sandy, something that is available at all Canadian Mickey D's but is very rare in the USA. This may not be on her favourites list for long because it has gone the way of the Tim Horton's donuts, stodgy instead of light and cake-like with crunchy edges. Efficiency in preparation takes precedence over quality of food one more time.

What does Pure Michigan mean? It has been the state tourism marketing motto since 2008 and I have no idea what they think is pure. I'd understand if it was just the Upper Peninsula but this includes Detroit and Flint.

After one last US fuel stop in Soo, Michigan, we went by a stopped line of US bound cars on the International Bridge and crossed into Canada at 12:20. It was partly cloudy and a very comfortable 67F. The first thing we encountered was a red traffic light on the bridge because it was one lane due to some heavy construction. Then we found the Customs booths were all being rebuilt. The agent asked a couple of questions and welcomed us home. Interestingly, he never even asked what was in the trailer. 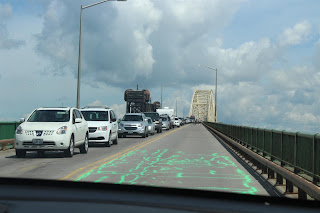 US bound cars - no idea what the green was about 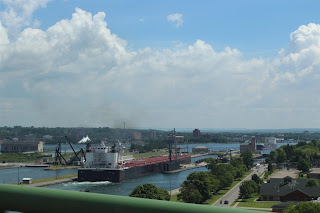 Soo Locks - busiest canal in the world based on tonnage 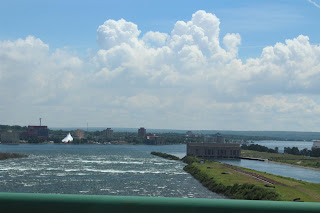 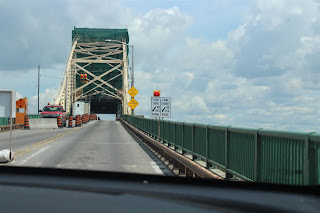 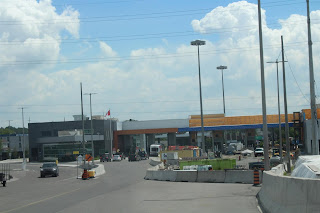 The Customs booths are getting a facelift 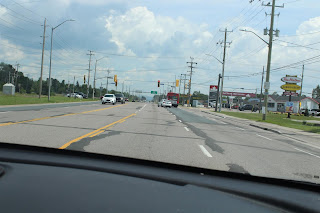 Tim's AND Petro-Canada - we are home for sure 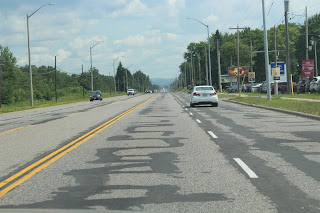 And the pavement confirms it

We followed the traffic out of the Soo on four-lane Highway 17. When it turned to two-lane at the St. Joe's Island turn off, the twit towing the bass boat ahead of us (who had been cruising along at 65 MPH) hauled it down to 55. There was nowhere along here for me to get by so I followed him for ten miles before we got to a passing lane.

At the next passing lane, two cars ahead of us went to the left lane despite the fact that they had no hope of catching the vehicles ahead of them. I don't like passing on the right in these places but I did, something that is legal in Ontario if the left lane is congested. I have no idea what makes people like these so clueless.

Also, what imbecile in our Ministry of Transportation thought that allowing bicycles on a two-lane 90 KPH highway and then passing a law that motorized vehicles must give them at least three feet of clearance was a smart idea? A semi can't give them three feet of clearance and stay in its own lane. In a curve, this can be a fatal surprise for an oncoming vehicle. Speed doesn't kill, speed differential does and this is the worst case scenario. Regardless of the Participaction lobby, bicycles have no place on a busy two-lane highway. 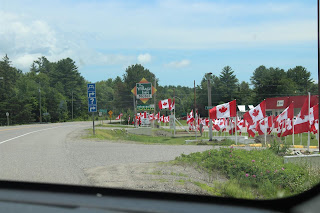 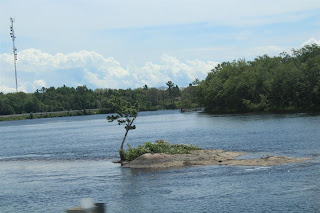 Near Massey, we saw a dark cloud on the horizon. On the other side of town, we came upon wet pavement and then it started to rain. This was the first precipitation we had driven in since leaving Madison for Boscobel a month ago. But it was short-lived as the cloud moved on the to the south. 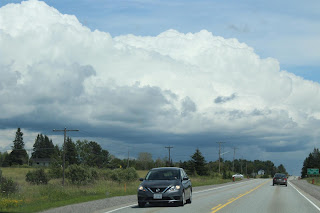 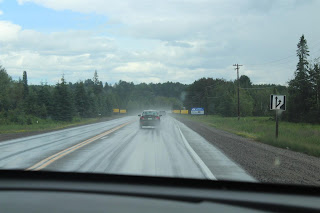 First wet pavement in a month 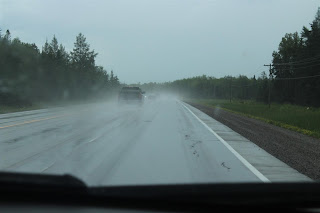 Now it is raining

We reached what used to be the start of the four-lane at Whitefish but it was still a permanent two lane stretch with no passing all the way to Sudbury. Some stretches of the westbound side were really torn up and they were working on the bridge over the Vermilion River as well. I imagine this project is going to take quite a while to complete. 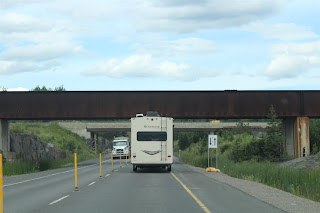 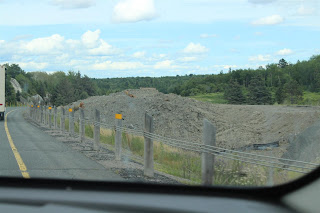 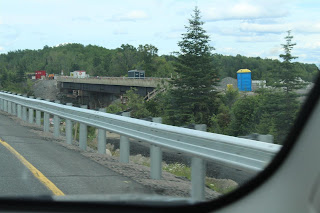 Bridge over the Vermilion River 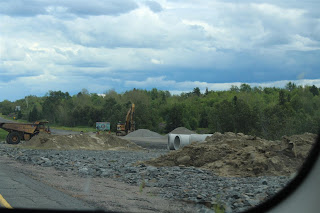 As we approached Sudbury proper (we had been in the City of Grater Sudbury for thirty miles), we encountered more damp pavement but the rain clouds responsible were off to the south. We arrived  home at 4:30, significantly beating the GPS prediction because it can't handle calculations involving 90 KPH roads, and we were completely unloaded by 5:00. 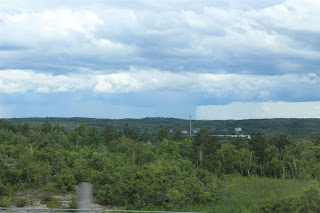 Active rain moving away from us

My goal was to not fall into my post-trip doldrums and get to work on my extensive to-do list. That, as usual, was a pipe dream but that is another story...... 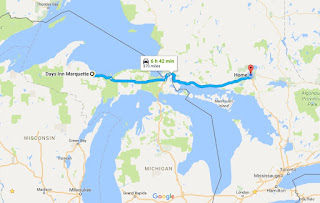