We spent the last three days enjoying Mal and Corvette's hospitality in Silt, Colorado. I didn't mention in the last post that they have three dogs. Ringo is an Australian Cattle Dog. He is steady and restrained except when folks from Alabama play with his face. Leia is mostly ACD with a bit of maybe pit bull or Staffie, as evidenced by her smile. She always wants attention and usually brings a toy to be thrown, but she will go away if spoken to firmly. Ruby is part ACD but her head and teeth put her somewhere in the terrier family. She is a sweet animal but a little high strung. They were fun to be around. 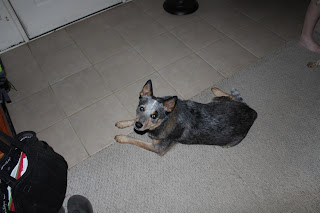 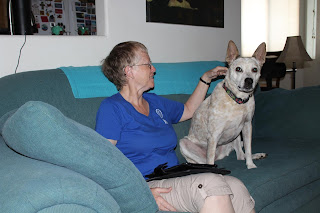 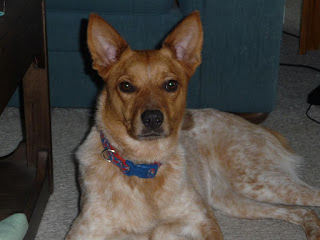 We slept late this morning. Mal made me a breakfast of huevos and green chili, but he kept the chili mild due to my sensitive Canadian palate. I found it to be excellent. Sandy had Raisin Bran.

It was good to see Corvette's smiling face this morning. She got home very late last night because she and the nieces accompanied her mother Yvonne to the ER after a fall while hiking. The final diagnosis was that nothing was broken but some pain meds were in order.

I sorted 343 photos from yesterday and transcribed my notes. I was still using too many words in my posts, but I tried to keep them to a minimum. I almost got caught up.

The four of us drove into Silt. Mal needed something at Wally World so I took the opportunity to buy more water and Sandy got some single serve coffee creamers. Then we went buy the grocery store where Sandy and I marveled once again at the selection of things they have that we do not. But we did find one place we come out ahead. They have never heard of BUTTER TARTS!!!!


After we got back to the house, Corvette left to help her mom with the nieces. Mal and I talked politics for a while, an interest that we both share. Then we took a ride in his 1953 Willys jeep to get some ice. This was an interesting vehicle, not fast but rugged. 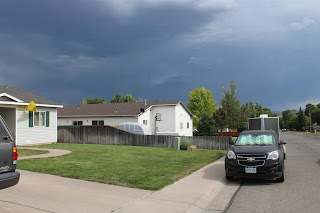 The storm missed us 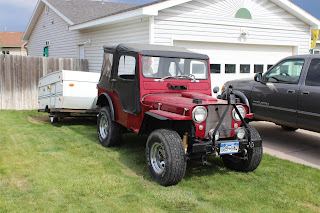 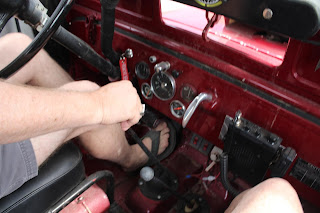 I have been in more luxurious interiors 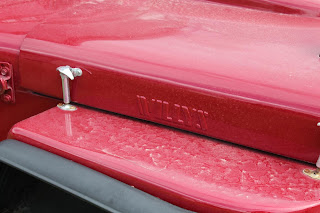 But it is tough

Corvette's parents, Dennis and Yvonne, arrived before supper. Yvonne was feeling better after her fall yesterday. Mal prepared a fine meal of smoked chicken, green beans and scalloped potatoes. Corvette and the girls arrived just as we were finishing.

Dennis turned out to be a golfer. We compared notes and I think we are similar, serious players lacking a serious game. I got to examine his clubs, which featured a number of rescue clubs. After watching how Leo plays with these, I am really going to have to get some.

When Dennis, Yvonne and the girls left, they took Leia with them. An immediate calm settled over the other two dogs. The four of us talked for a while and turned in about 10:30.

I had some communications today with our friends Eric and Sherri. We hadn't seen them in quite a while. It turned out that Sherri was retired and Eric was mostly retired. They got a new-to-them GL1800 and Bushtec trailer and had been traveling big time. They were currently in the northwest but were getting beaten up by the heat. Hell, I didn't like the heat and I had air conditioning. We looked to see if we could rendezvous but it didn't appear to be in the cards.

Corvette had left for her mom's by the time we got up. Mal made me a breakfast of eggs, beef hash and toast, an excellent start to the day. Sandy had, you guessed it, Raisin Bran. I managed to finish the last blog post from the road covering the day before yesterday.

Ringo and Ruby were the picture of calmness today without Leia to instigate any excitement. 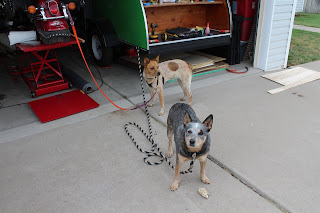 Mal and Vinnie worked on the teardrop trailer he has been constructing for a while. He plans to sell it when he is done, so if anyone wants a teardrop trailer that has been built with the utmost in care and workmanship, I can put you in touch with him. Then Vinnie left for his home in Denver. 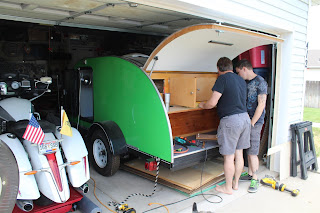 It is a very nice trailer

After Vinnie left, Mal hoisted Corvette's 1500 Drifter up on the lift. He installed a Bluetooth transmitter that will communicate with her headset without wires. Then the two of us figured out how to bleed her mushy hydraulic clutch line. 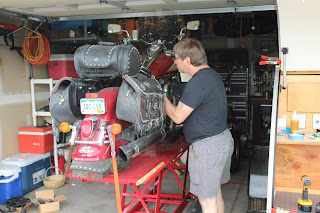 Working on the Drifter

Dennis, Yvonne and the girls showed up with Leia in time for supper. Spaghetti, meat sauce and salad was excellent. Then we all went to Rifle for the July the 4th Eve fireworks display. We settled in on blankets and a couple of chairs (Dummy me did not get the three chairs out of the trailer) and waited for the sun to go down. 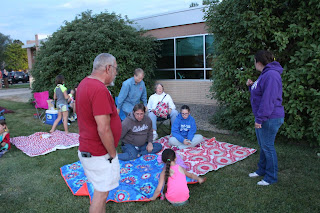 Getting settled on the grass 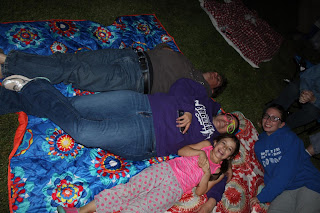 Some got very cozy 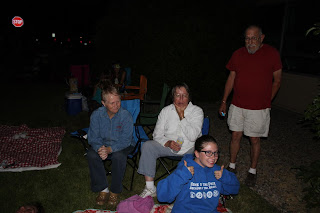 For a small town, Rifle certainly put on a decent fireworks display. After it got dark, we oohed and aahed for what seemed like a half hour. Then we waited while Rifle's finest observed the traffic jam caused by everyone trying to escape the parking lots. I'm pretty sure our boys back home would have gotten involved and tried to improve the Exodus.

It was late when we got back to the house so we were in bed soon after we got back.

My subscription to the National Post got mangled today. They sent me a message at the beginning of June that said my digital access would be expiring. Not knowing why, I sent them a note and they said that I shouldn't worry, it was an anomaly due to them changing platforms. Wrong! It turned out the credit card they had expired at the end of May but none of their communications stated this. Despite trying everything, I could not find anywhere on their site where I could change my CC info. I tried to resubscribe but it insisted my card was expired even though I put in the new info. Then I deactivated my account and tried to sign up again with a new card. They charged the card but wouldn't let me in because it said my account was inactivated. I will try to phone them and see if they can sort this out. I like the publication but now I can't stand their customer interface.

We had a breakfast of bacon, eggs, potatoes and flatbread. Sandy had Raisin Bran. I sensed a pattern.

Corvette and Yvonne took the girls to the water park in Grand Junction. I was on line about 9:30 AM when the Internet died. The router was good but it wasn't talking to the outside world. Mal made a call to Comcast and they told him it was a major outage and might be back by 9:30 PM.

Mal set up his E-Z Up shelter and moved his Victory Cross Country out of the sun. First, he pulled the outer fairing off exposing all the wires hidden inside. This gave him room to hook up a Bluetooth transmitter, the same as the one he put on Corvette's Drifter yesterday. Then I helped him install heated hand grips. All was going well until we realized we needed to pull the inner fairing to install the on-off switch. That was a trick. There was a photo showing the eight screws that needed to be undone, but it wasn't a very good photo. We found four right away and eventually we stumbled on the other ones.

But the job got done and the grips warm up on command, plus I learned some new things about this obsolete motorcycle brand:-)) 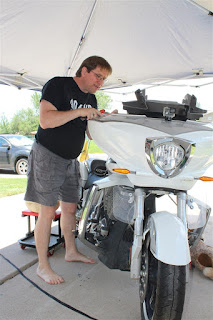 Mal pulling the outside fairing 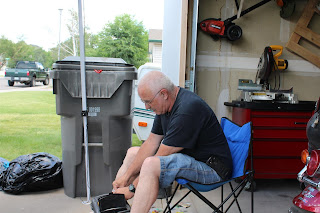 Me sorting my fuses

Mal made some hamburger patties that included shredded bacon, an idea that occurred to us the other day when we saw a similar product offered at the grocery store for an outrageous price. He also put on some 1/4 pound hotdogs, the likes of which I have not seen at home. Peaches and cream corn on the cob and mac 'n cheese completed the menu. 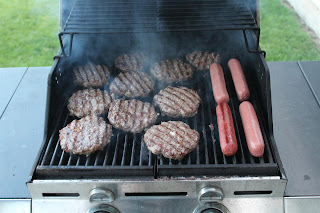 I'm hungry just looking at this 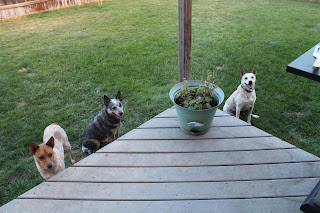 The dogs are protecting the grill 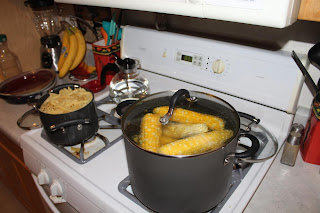 Mac 'n cheese and corn on the stove 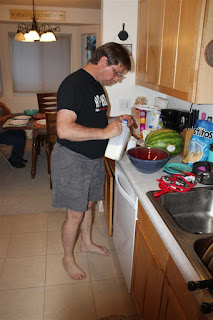 The chef hard at work

Corvette's grandad Gene arrived, as did Dennis. Gene was quite the character. There was no sign of the ladies so the gentleman and Sandy sat down to the perfect 4th of July supper. 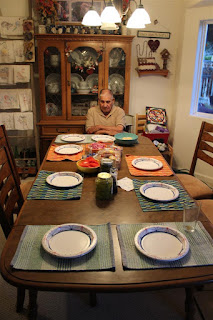 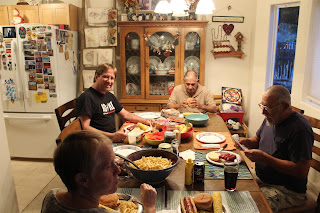 The WiFi came back on about 8:30 PM and the girls got back about 9:30. After they were all fed, we said goodbye to Dennis and Yvonne. I told Dennis we would bring golf sticks next time and, if they ever got to Ontario, we had a place for them to stay. It wasn't long before we all headed for bed, led by Mal who had to work tomorrow.

Thanks to Malachi and Corvette for the first rate hospitality and the chance to reconnect. We often see each other at rallies but there are so many others around that we don't get a chance to spend too much time together. We will be seeing them again at WWR XI in Missouri in two months.

The big question for us was what to do next. I had an idea that this might be a good time to ride Beartooth Pass but the west was still simmering with excessive heat. Plus the Super 8 in Cody was priced extremely high. While discussing this, I came to a realization that had been nagging me for a while. I didn't feel a great need to ride the bike. This might have an impact on our future travels, especially after we had two very nice trips last year with just the Equinox. I told Sandy I would be just as happy to aim for home, possibly by some roads that we haven't traveled on or haven't seen in a while. She agreed.

We will be leaving tomorrow and traveling north. Casper, Wyoming; Glendive, Montana; Moorhead, Minnesota; and, lastly, Marquette, Michigan should see us back in Sudbury by Sunday night. Then we will have a serious talk about how we want to travel in the future. From 2004 to 2010, we rode the bike. From 2011 to 2017, we towed the bike. Who knows what will be next.
Posted by Jim "Skid" Robinson on 7/05/2017