I was disappointed that the mileage we got from the tank of "no ethanol" fuel we got yesterday was among one of the worst mileage tanks we had gotten on this whole trip. It might have been due to road conditions but I didn't notice anything significantly different. Perhaps the fuel was not what it was presented to be?

Today was going to be the longest day of the return trip. Imagine considering 500 miles to be a long day? We would also be losing the last hour to the time zone changes as we return to Eastern. Up and moving by 5:15, all our gear was already in the car and we were checked out by the time the hotel breakfast room opened at 6:00 AM. After a quick breakfast of scrambled eggs and sliced sausage for me (Sandy had Raisin Bran and yogurt, not hard to keep her fed in the morning), we were rolling by 6:20. Today was the first morning dew on the car that I have seen in a long time.

After all my preaching about not blindly trusting GPS generated routes, I punched in Marquette, Michigan as a destination and blindly followed the directions. It was no surprise that we did not end up following the roads I thought we would, but we were lucky it worked out OK this time.

The countryside here was very pretty. Rolling hills, green fields and lush trees abounded. It was relaxing to drive along but the scenery lacked the excitement of western vistas. The view hardly ever changed and, ten miles along, it looked pretty much the same. As a result, we didn't take a lot of scenic photos. 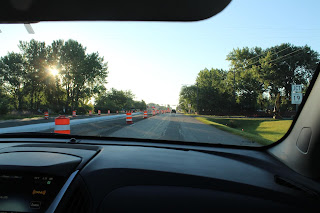 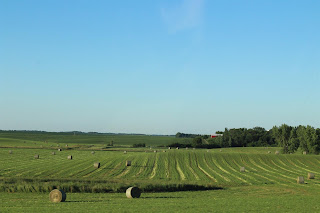 Pretty but not breathtaking 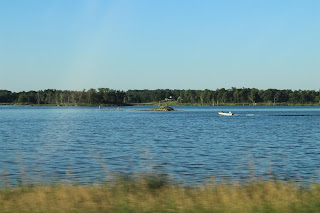 More water than the west

We passed a sign for Crookston, Minnesota. After our interaction with Casper's finest the other day, I was reminded that on July 3rd, 2002 a Crookston officer let me go with a written warning after clocking me in town doing 39 in a 30 MPH zone on my 2000 Nomad. That was my last traffic stop in the USA until this trip. Officer discretion is a wonderful thing. 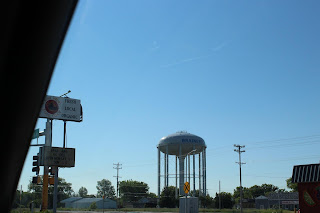 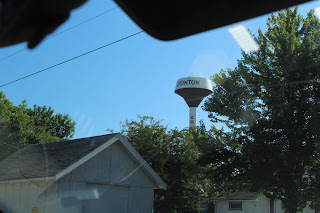 Each one is a little different 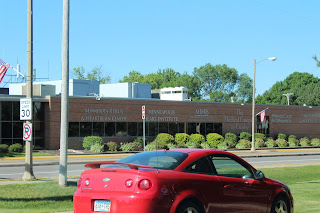 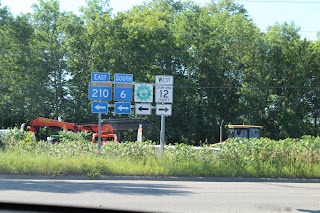 Back on the Great River Road

In the olden days, we used to change the oil in our vehicles at regular mileage intervals. Like most vehicles today, the Equinox is equipped with an Oil Life Monitor System that determines when it should be changed based on a number of driving factors. It expresses oil life remaining as a percentage and provides an alert when this gets close to zero. I guess the idea is to conserve energy by not throwing away lubricant before its time.

So we were on this 6,000 miles trip. Under the old system, I would have had the oil changed somewhere about half way through. Instead, I have been watching the oil life remaining. It started at 100% and is now under 20. I expect about 15% will be left when we get home tomorrow. The one caution is that vehicles still can use a little oil so that, with an extended period between changes, you must keep an eye on the oil level. I have been checking every day. It looked like like we would make it without topping up.

I have no idea why I just went through that whole description. I guess I just wanted to share some of the details that go through my head while we are going down the road. Welcome to my world. 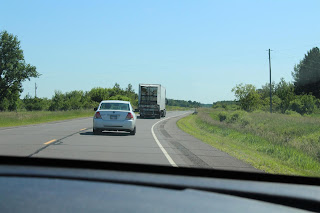 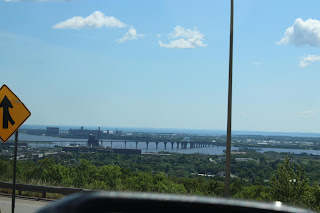 Approaching Duluth and looking at Wisconsin 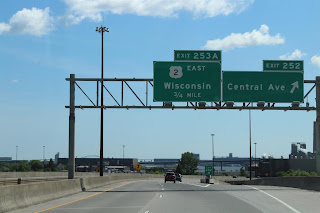 Highway 2 is an old friend

We crossed the Richard I. Bong Bridge to Wisconsin. I wondered how many people today have any idea who Dick Bong was. A USAAF P-38 pilot during World War II, Bong was an ace with 40 Japanese planes to his credit. Ironically, after being sent home in January and becoming a test pilot for Lockheed, he died in the crash of a P-80 Shooting Star on the same day that the first atomic bomb was dropped on Hiroshima. He was born and raised in Wisconsin and attended teacher's college in Superior. 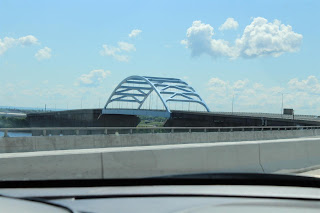 Richard I Bong Bridge to Wisconsin 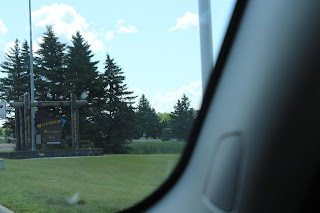 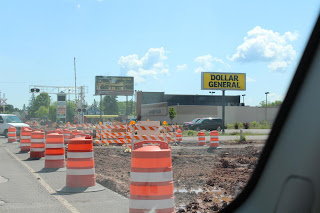 Superior Wisconsin knows how to tear up a street 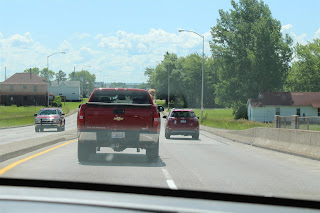 We liked the dog 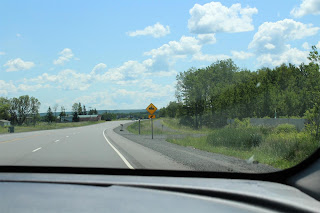 Back in snowmobile country 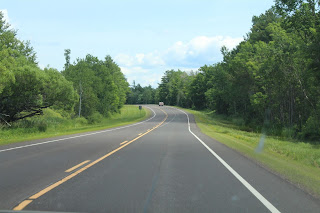 We stopped for fuel and a McDonald's lunch to go in Ashland, Wisconsin. Then we continued until we crossed into Michigan around 1:30 PM. The temperature was a comfortable 76 F, more to our liking than the blistering southwest. 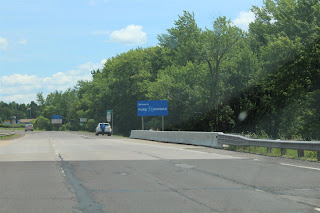 It was summertime in Northern Michigan... 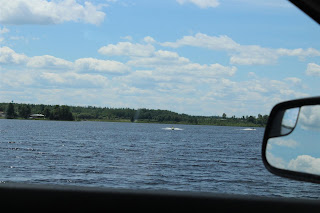 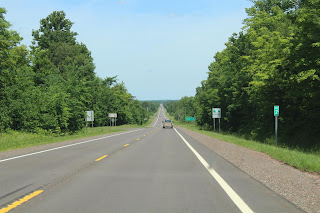 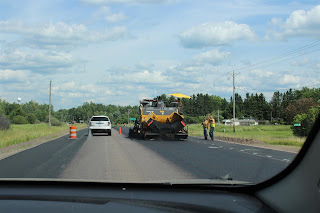 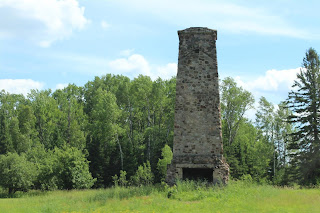 This was once someone's home 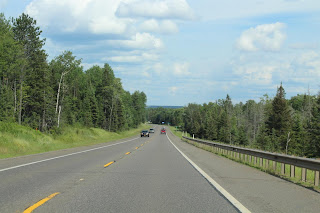 We noted that there was a lot of construction going on in Ishpeming and Marquette. Industrial parks and big box stores were being built at more than a few locations, indicating that the economy must be doing pretty well. We arrived at the Days Inn at 5:30 Eastern. This wasn't our first or even our second stay here, but it certainly commanded a hefty price on a Saturday night in July. The front desk was friendly and competent and we ended up with two double beds on the second floor. This was the first night since we left Escanaba a month ago that I did not rush to turn the air conditioner on. The temperature probably would have put Sherm into hypothermic shock.

Hudson's Classic Bar and Grill was right next door to the hotel, so we wandered over and got a table. Both of us ordered Monte Cristo sandwiches. Sandy got creamy coleslaw while I got fries, and then we split the sides. Since we were walking, we probably should have tried the $3.00 margaritas. 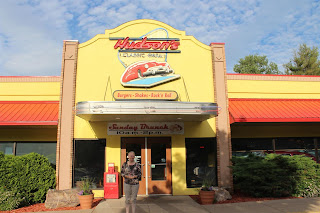 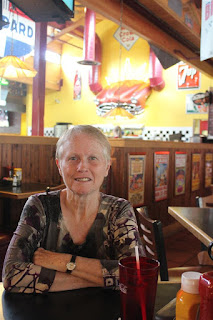 Last supper on the road

After supper, we retired to the room. I'm sorry to say that it had seemed like a long day even though this would have been a short distance for us not too long ago. I went through three separate fatigue periods today, each requiring a stop and walk around to clear my head. I don't think Sandy got fatigued because she was actually asleep much of the time. I'm sorry I didn't get to the hot tub that killed my last Timex Expedition watch when we stayed here with Brother Bear, Brad and the ladies.

Our thoughts were turning homeward as we turned in early. 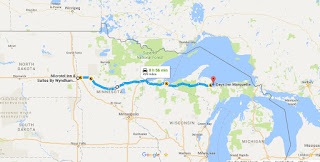