Up early to pack and then visit the dental surgeon fellow. He gave me a thumbs up and a syringe and told me it was my new best friend. Then I was off to the bank to deposit a few cheques. On the way, I called Bell Mobility to see about changing the payment method since the regular credit card is toast. Came home, loaded the bike, transferred files to the notebook and declared us ready.

I also took time to call Bushtec to see why they hadn’t charged my credit card for the trailer hitch. Seems the hitch is still sitting there for some reason. Best outcome, actually, because we now have an appointment next Monday morning at the factory in Jacksboro Tennessee to get it installed by the pro’s.

I should point out that it was 0C when I arose this fine day. Leo Laframboise, a riding buddy for almost 30 years now and relatively new Nomad owner, figured it was too cold to play golf this morning and had called to see if he could ride the first hundred miles to Parry Sound with us. Misery loves company, right?

After bidding the in-laws adieu, we set out under partly cloudy skies. The temperature had risen a bit, but 7C is only 45F. The ride to Parry Sound was uneventful and it only spit a little rain and light snow at us on the way. 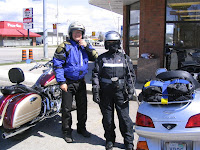 We stopped at Tim Horton’s in Parry Sound for lunch where Sandy and I got the last sandwich due to bun insufficiency. Leo settled for a muffin. Sandy figures this squares things for the time he took the last Egg McMuffin in a McDonalds in Barron Wisconsin in 1981. She ordered first, but his server was faster and she has never forgotten.

We waved goodbye to Leo and headed south again on the now four-lane divided highway. Down the road, ugly looking local storm systems started developing so I stopped to put on my full rain gear after about 60 miles. Good thing because solid rain and then big, white, fluffy snowflakes started falling within the next five miles. Luckily, the snow melted on contact. This must be a new me, because usually I wait until I get caught in the rain before suiting up, by which time it is too late.

South of Barrie, it cleared up somewhat, although there was a particularly nasty looking cell to the east. Since they were coming from the west, our interest was purely academic but we saw the effect of its passing when we got to the Holland Marsh. Emergency vehicles were assisting a number of cars off the road and the fields were littered with hail. At that point, I was happy we had taken our time with lunch.

From this point, we completed the trip to Cambridge on two lane highways. It stayed dry until we hit town and the Wing made short work of the dawdling local drivers who clog these roads and usually hold up my van.

In Cambridge, the rain started again and, as I was getting the luggage out of the bike at Heather’s, more flurries.

After an evening of dinner and visiting with both daughters and future son-in-law, we returned to Heather’s where I caught up on the mail and newsgroup and it was time to turn in.
Posted by Jim "Skid" Robinson on 5/02/2005