We rose early to a bad weather forecast. We packed and the drizzle broke just as we left the driveway, heading for our rendezvous with Terry and Patsy Appleby at the Tim Hortons on the south side of town. We have known them since 1980 and Terry and I have a history of both high speed tours and sidecar family runs over the years.

We arrived at Tim's a little ahead of our 8:00 AM meeting time. The drizzle started up again as Terry and Patsy arrived right on time on their Honda Valkyrie, towing their cargo trailer. Starting south, we rode through a cold front with pretty stiff wind gusts and occasional rain. Since the Valk doesn't get good fuel mileage at best, and the trailer and headwinds cut into this, we stopped for fuel in Parry Sound. In an attempt to upgrade the washroom facilites at the Tim's in Nobel, they switched the Men's and Women's rooms. Luckily, I noticed. Unluckily, Terry didn't. Sandy and Patsy were in the Ladies' Room when he heard their voices from the stall he was in. Fortunately, they were the only ones in there as he beat a hasty retreat.

As we left Parry Sound, the rain let up although it stayed windy. We moved another 100 miles south at about 130 KPH to the Petrocan at 400 and Highway 89. The speed combined with the wind and the cold to further reduce the mileage. The day was starting to get a lot dryer and we almost took off the rain gear. I said almost, but we're more experienced than that and it's a good thing we kept it on. Before we reached Toronto, we hit the warm front that the weather map had shown at right angles to the cold front. This brought a steady rain, the all day kind that gets everywhere. We ran across the top of Toronto in virtually zero visibility as the rain combined with the spray from the vehicles. This continued all the way down the 407 and QEW to Fort Erie, where we got off the road for more fuel and a food stop at McDonalds.

The traffic at the Peace Bridge border crossing was light. I pulled into the booth first and the young lady asked the usual questions. When she asked where we were going and I told her North Carolina, she asked why. I said there were some nice roads we wanted to ride. She then asked "You would brave this weather to ride some NICE ROADS?" I said "Yes, Ma'am, that's what we do." She laughed and waved us through, with Terry and Patsy right behind us.
To our surprise, the rain stopped and some blue sky appeared as we headed west on the Thruway bucking headwinds to Erie Pennsylvania, where we stopped again for fuel. Our luck wasn't going to hold, though, and the rain started again as we turned south on I-79. We continued on to Grove City where we fueled once more as the rain let up again. Patsy says I need to mention that the ladies did not complain once, and she was right. These passengers are two of the best riding partners anyone has ever had.
As we approached Pittsburgh, the rain started off and on and, as we went up past the Mount Nebo Road, a spectacular lightning show started to the south of us. The sky lit up time and time again as darkness fell, but the brunt of the storm was still ahead of us. At the South 279 interchange, we came to a dead stop. AGAIN!! I begin to wonder if they will ever finish the road construction here. Fortunately, the temperature had risen to 25C by now and it wasn't raining any more. When we finally got back up to speed, it started cooling and the light show ahead of us got even more wild.
Terry has a habit of continuing to ride no matter what the conditions. My judgement was that it was now pitch dark with severe lightning ahead and it was time to stop. When we reached Canonsburg Pennsylvania, a pretty little town built on a series of scenic hills, I passed him and pulled off down into a Super 8 parking lot. We got a room and took the gear off.
You have to picture where we were. The Super 8 was in a low spot and all the restaurants were back over a hill in the next hollow. We decided to walk and headed up the hill along the side of the four lane road. At the crest, the shoulder disappeared and so we crossed to the median where the walking would be safer. As we descended the other side, we encountered a No Pedestrian sign but we pushed on. I guess people don't walk much in Canonsburg. In the mass of restaurants at the bottom, we found the Wai Wai Buffet. They had a good selection for only $8.95, so we filled up on food. Another thing about Terry. He can't pass up a good buffet. 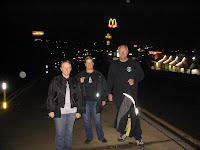 After eating, we asked if there was another way back to the Super 8. We were told that we couldn't get there from here other that the way we came, so it was back out to the median and up over the hill. You will note in the picture that the road is on both sides of us as we walked down the centre with local drivers giving us strange looks.
Back at the room, Patsy went to the lobby to use the computer to check Email. We didn't last long after that, tired as we were, and we settled in to a good night's sleep.
Posted by Jim "Skid" Robinson on 10/04/2006