It was cool and damp this morning. The Weather Channel Doppler showed a band of rain across the Huntington, Charleston, Beckley area, so we prepared for the worst. We fueled and jumped back onto I-79 south. At Clarksburg West (By God) Virginia, we got off on the side road and found a McDonalds for breakfast. It's good to be back in the US where I can get a sausage biscuit while Sandy has her bacon, egg and cheese McGriddle without any cheese. Patsy didn't realize the McGriddle was made with syrup, so I traded her for my biscuit. We came out heading for the south interchange, but found there was no gas there so we doubled back ending up at the same gas where station I lost my clip-on sunglasses a few years ago. They weren't there. 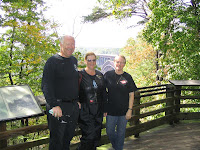 We continued south and branched off on US-19 towards Beckley. I warned Terry about the police in this area and how they would stop someone for one mile over the limit. After all my warnings, we went up over the scenic Powell Mountain and through Summersville without seeing a single cruiser. South of Summersville, we stopped at the Visitor Centre on the north of the New River Gorge Bridge. The picture shows us at one of the lookout platforms on the boardwalk over the edge of the gorge. The bridge, 3,030 feet long and 876 feet above the river, is in the 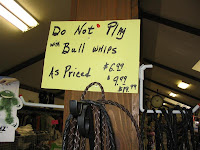 background. We stopped at the store below the Visitor Centre for the first time. I'm not quite sure what to make of the sign, but you can be sure we didn't play with the bullwhips.
South of the bridge in Fayetteville, we stopped at a K-Mart so Patsy could look for a pillow. It seems the seat on the Valk wasn't as comfortable as it should have been. She managed to get a nice, bead filled Batman pillow, but had to wait forever while one cashier dealt with a line of customers at a pace that can only be compared to a snail in slow motion.
Finally, in Oak Grove, Terry got to see one of the local constabulary who had been going south ahead of us. He saw a speeder and didn't even wait for a turnaround, wheeling his cruiser down through the median grass as he made a U-turn to go after him. They are aggressive here.
In Beckley, we caught I-77 and followed it down through the East River and Big Walker Mountain tunnels to Wytheville Va, where we caught I-81 westward towards Tennessee. We continued along here with relatively light traffic, fueling once at Exit 57, and then got off on my shortcut road at Exit 17 in Abingdon Va. This little road winds south through beautiful countryside and large houses, crossing into Tennessee and ending at Darter's Store and US 421. We turned west on 421, which goes to four lanes as we wound across the Tennessee landscape. Another left on the Tennessee Ernie Ford Parkway and we approached Bristol Motor Speedway from the back way. There were storms to the north as we headed across to Johnson City and I-26 South. 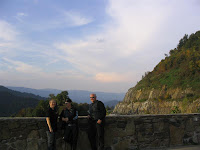 After the wild twisting climb up I-26 to the ridge that marks the Tennessee/North Carolina border, we stopped at the scenic overlook. You can see the Tennessee side laid out behind us in the picture. We continued on down the other side pat where the trailer opened by accident last year and went on to Asheville. Going around town, we took I-40 west. The truck traffic was as busy as ever so I was glad when we got off on 19 and followed it into Maggie Valley. We cruised through town and found a promising looking Comfort Inn, but it was full. The Microtel advertised a hot tub and so we got a room.
Patsy stayed in the room while Terry, Sandy and I went down the road to a place called Snappy's. The service wasn't very fast and the food was only OK, but we didn't complain and took Patsy back a sandwich. We changed and headed for the hot tub, which wasn't very hot. In fact, it was broken. The story of my life. After a quick dip in the pool, we turned in hoping for good weather tomorrow as we started playing on those "Nice Roads" I told the border lady about.
Posted by Jim "Skid" Robinson on 10/05/2006