It was cool and foggy in Robbinsville. As we went up the mountain heading back towards KSL, we broke out into clear blue sky with a cottony fog below is. At KSL, Fred was cooking a fine breakfast but we didn't have time to stay. Bidding goodbye to the gang, we headed up US 74 to Waynesville, passing two motorcycle cops doing business with an unfortunate car driver at the side of the road. After fueling and grabbing a quick McD breakfast, we took I-40 East to the other side of Asheville, where we entered the famed Blue Ridge Parkway (BRP). 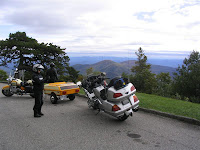 Since it was Saturday, the traffic was slow. Cars were ambling along at below the 45 MPH speed limit, some as low as 30 MPH, enjoying the scenery and generally getting in our way. There isn't supposed to be any passing on most of the BRP, but we squeezed by where we could. One driver, whose dog had its head stuck out his open sun roof, took exception and honked as we passed. As we got away from Asheville, the traffic eased up and we were able to make better time. The leaves were starting to change and the views were more spectacular than usual. We stopped at a lookout to take it all in.
Further up the BRP, past Grandfather Mountain, the BRP is closed indefinitely due to a landslide and so we had to detour onto US 221. That is a road with some attitude and we were back in traffic again, especially one slow moving truck towing a horse trailer. Eventually, we got back on the Parkway and moved along until we arrived at Deep Gap, where we followed 221 into West Jefferson for gas and lunch at Arby's. At the BP station, an older couple from Cleveland stopped to talk about motorcycles.
US 221 from West Jefferson to Wytheville Virginia is a particularly winding road. We covered it earlier this year southbound and the northbound side is just as good. It is recommended to anyone heading through this area. We passed three dead deer and the mashed parts of what we suspect was one more, but didn't see any live ones. In Wytheville, I called ahead to Beckley, West Virginia and found things were booked since this was one of the last rafting weekends of the season. We elected to stay in Wytheville and got a room at a Travelodge.
Terry and Patsy went across town to do some shopping at the Wal-Mart. Sandy and I decompressed until they got back, and then we all went next door to Cracker Barrel for supper. I finally got a chance to have the chicken fried steak I had been promising myself. I don't know why this isn't available in Canada, but I make up for that whenever I am south of the border.
After getting back from dinner, we watched a little TV and then turned in.
Posted by Jim "Skid" Robinson on 10/07/2006