We woke late and the group wandered down to Grandma's again for breakfast. Then, back at the campground, we broke into smaller groups to head out for some rides.

Tomcat led our crew south on US 31 to Manistee, where we stopped by the harbour. 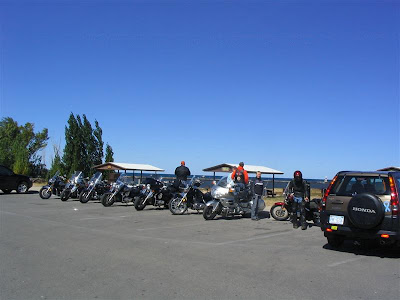 Here, the bikes are lined up in the parking area as the brave souls wander down to the windswept water.

From Manistee, I took the lead with Stella guiding. We explored a new road, Mi 110, that headed north along the lake. It was limited to 35 MPH, but that was enough given the twists and turns it took among the cottages and summer homes. We will need a new sign to indicate sand dunes across the road, though. That was a surprise as I was leaning through a corner.

At the end of 110, we came to Mi 22, the usual route we take north. It consists of many sweepers with some tighter corners where it climbs and descends the massive sand dunes that make up the terrain in this area. We stopped at the usual scenic overlook and some of the more industrious members climbed the long stairs to the upper platform. I've been there before, so I sat down on a bench and waited.

From there, we continued north to Frankfort where we had a case of deja vu all over again. Last year, Tomcat was leading when he made a wrong turn. In the course of going through a parking lot and reversing direction, he got his foot caught under his floorboard and, essentially, ran over his own foot. Tomcat took the lead in Frankfort again to guide us to a restaurant and missed the same turn. As we pulled into the same parking lot, we all had the same feeling as the potted petunia in the Hitchhiker's Guide To The Galaxy, "Oh no, not again". This time, Jack kept his feet up and we averted tragedy.

We ate at the Villa Marine Bar and Grill, the same place where The Mighty Stonewall got his Wing stuck the night before. Since Gord wasn't with us this time, we couldn't ask for an instant replay. Thanks for lunch, Jack. It was kind of you.

After lunch, I resumed the lead and we wound on up Mi 22 through Sleeping Bear Dunes. Then we cut south on some back roads, returning to Interlochen. With Stella's help, I'm pleased to say that this is the first run through this area that I can remember us not getting lost.

Back at the campground, Flip's plan of a potluck supper was coming together. They had collected money and set off with Slammer's truck to pick up food. 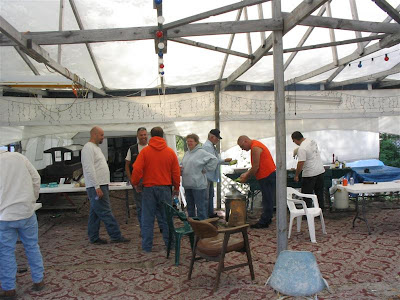 Here, Flip, Shelby and Lugnut discuss important things while Slammer, Flattop and Bugsplat cook away in the background. Food consisted of wings, corn on the cob, burgers, beans, several salads and other goodies. It was a fine repast and we give thanks to all those who made it happen.

This was the largest gathering we have had in Interlochen. Slammer even drove his truck all the way from North Carolina. Many were old familiar faces, but there were quite a few new ones as well. This blend of old and new friends is what keeps us coming back time after time. Special Kudos to Marlene, who made her first solo trip from Adrian Michigan. Scotty had come up earlier and Mar made better time than he did.

As usual, the fire started as the sun went down, although I found that an earlier bed time was a better choice and turned in about midnight.