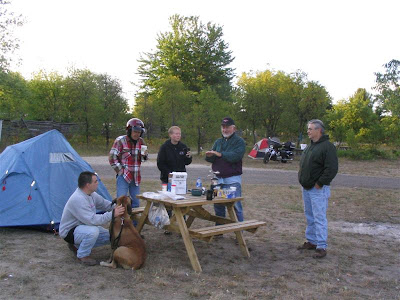 It was a cool morning. Boomer and his new dog, Scotty, Sandy, Slammer and Gearman huddle around the camp stove as the coffee is brewing and Slammer's digital thermometer says 36F. Luckily, despite the cold overnight, the ceramic heater and down comforter kept us toasty warm.

What's an Interlochen morning without breakfast at Grandma's? As soon as we warmed up a little, small groups started trickling down to the corner where we ate with gusto.

Our group decided to head north today, up to the Tunnel of Trees. Tomcat led, with us, Stonewall on his new (to him) Wing, Furhead and Gearman in tow. We rode up US 31 to Charlevoix, where traffic backed up as it merged from four lanes to two for the narrow downtown area. I blocked the right lane to prevent cars from slipping past us and cutting in but gave a Chrysler 300 from Pennsylvania a break because I though he might be heading for a side street. Nope, this guy figured he had special privileges that allowed him to by-pass all of us who were waiting in line. I moved back out and nobody else got by.

On the north side of Petoskey, we stopped in a pretty little municipal park. Signs, visible only to those using the restrooms, warned that smoking was prohibited in the entire park area. I chose to pretend that I hadn't been to the restroom. Smoking prohibitions are getting tighter and tighter.

Going north, we took a detour through Harbor Springs, a very upscale community right on the shore of Lake Michigan. Large houses, many of them quite old, lined the streets and impressive boats were docked at the marinas. I can only imagine what real estate goes for here.

The Tunnel of Trees is a narrow winding road that parallels the lake shore. The trees from both sides grow together blocking out the sky, hence the name. We were lucky because the only slow moving vehicles we came up behind pulled over and let us by. We saw southbound bikes trapped behind slow movers, a frustrating experience.

At Cross Village, we stopped at Legs Inn amid many motorcycles. Legs is named for a row of table legs mounted on the roof and features Polish cuisine served by summer students direct from, you guessed it, Poland. Sandy and I split a Taste of Poland specialty that included cabbage rolls on sauerkraut, perogies, kielbasa and dumplings. We talked to a contingent of Women on Wheels at the next table about upcoming rides in the area. Outside, afterwards, the Pennsylvania Chrysler 300 that annoyed me in Charlevoix was parked right in front of the restaurant. The middle aged driver was helping and elderly lady into the front seat so I opted to not tell him what I thought of his driving manners.

We got onto the big road and highballed it south. Stonewall broke off to go into Traverse City while Jack led the rest of us around town, getting us back to the campground about 6:00 PM. I pulled the awning down on the trailer so that we wouldn't be packing it wet with dew the next morning. There were a few new faces dropping by to see what VROC was all about, so we spent time talking to them and amongst ourselves. The fire got started again, but Sandy and I turned in even earlier than last night.
Posted by Jim "Skid" Robinson on 8/18/2007