Sandy and I woke early to the clip-clop of horses hooves on asphalt as a Mennonite buggy went up the road on the other side of the Grand River. There was a large amount of dew, so we wiped the bikes down well and I checked Heather's front tire. It was way down when we picked the bike up yesterday and, although topped up, it looks like the slow leak had dropped it another two pounds overnight. After adjustung it, we then headed into Elmira for fuel and breakfast at the Sip 'n Bite. Two eggs, ham, toast and hashbrowns for $3.25.

After breakfast, took a little ride up back roads to Elora and Fergus, where we stopped at Canadian Tire so Heather could get a few bike items. Then we headed back to the campground and went through the ordeal of setting up our big screen tent (hard) and Maggie McLeod's tent (even harder). 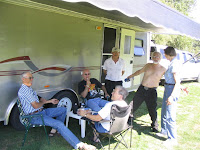 That done, we sat back and watched people arrive. They came in all afternoon and we ended up with quite the community out behind us. Here, first timer Lloyd and veterans Bob & Martha, Fred and Gabby and Mabel are set up and kicking back under the sunny skies.

The forecast for the weekend is sunny and dry. Maybe for once, the weather man will get it right despite his spectacular failures so far this year. 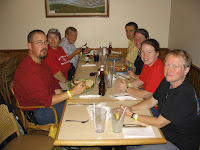 As the sun got towards the horizon, Tom and then Kim and Mike finally showed up. The family headed out to Elora to the Gorge Family Restaurant. Lots of food at reasonable prices. As usual, most of us ate too much. From the left, we have son-in-law Mike, Kathy Dickinson from Ottawa, Maggie McLeod from near Cambridge, Tom, Heather, Kim and Sandy.

After supper, we headed back in the dark. It was another chilly, damp evening, so we hung out at the camp fire visiting with everyone. At the end, Mike, Amber Appleby and I called it quits at about 2:30 AM.
Posted by Jim "Skid" Robinson on 8/31/2007