Cambridge Ontario to Bolton Ontario and Back Plus Woodstock

Yesterday was pretty quiet.  Sandy and Kim  sorted some stuff around the house and I did some of my overdue paperwork.  This morning, they went shopping and I made a trip back to Bolton to see Globetrotter RV about the additions to the motorhome.

Since it was after rush hour, I took the quickest cheap way to Bolton.  To stay cheap, you need to avoid the 407 because I think it has the highest toll rates in North America.  That's what you get when the province sells a major toll road to a foreign business.  But I digress.

After highballing into Bolton on the 401/427 and 50 Road, I stopped at Cruise Canada to talk to TJ about the  roof on the unit.  He confirmed it was a rubber membrane roof, the same as about 90% of the RV's produced these days.  That means I will need to learn to provide some TLC with regard to cleaning and UV treatments as well as avoiding any overhanging branches.  More specialized knowledge.

I then went up the road to Globetrotter where I spoke with Kevin, the owner, about adding a ladder (necessary for the roof maintenance), an amplified TV antenna and replacing the Mickey Mouse tow wiring with a proper seven pin wiring plug for the trailer.  He came back to Cruise Canada to look at the unit and we decided where the antenna wiring would go.  He and TJ worked out the details with the CC work being done next week and Kevin taking it the week after so it would be  ready for pickup on the 22nd.

I decided to return to Cambridge via the back roads.  I left Bolton on Mayfield Road where I was very surprised to see the roads covered with a layer of white salt.  Then I passed a brine truck going the other way laying down a wet saline solution.  It seems like very early in the season to be attacking this.  I followed many side roads (GPS set to avoid highways and Interstates) through Georgetown and made a short detour into Acton to grab lunch at McDonald's.  For a short ways, I followed a gentleman driving a Ford Model T, an unusual vehicle to see out on the road.  Many of the roads I followed would be excellent on a motorcycle.

Sandy and Kim were still out when I got back, but returned soon after.  Then we made plans to meet Heather at her office in Ayr about 5:00 PM.  Tom arrived soon after on his bike, which he had taken to work this morning. 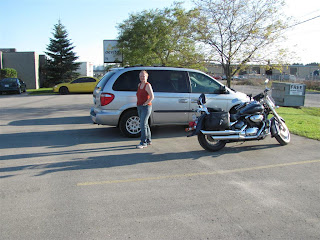 Waiting for Heather in Ayr
As soon as Heather got off, we piled into the van and drove down the 401 to Woodstock to see how their new house was coming along. The progress has been good and we walked through checking out all the work that has been completed. 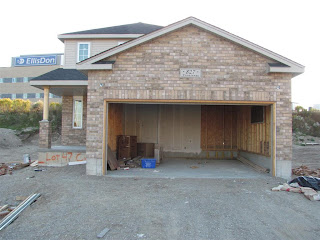 Heather & Tom's new home
Their house is near an exit on the 401 and, at that interchange, is a fairly new Truckstops of America facility. It even has a large truck wash that seemed to be in high demand and is one of the few places I have seen CB radios on sale. The menu had a first. I have never before in Canada seen chicken fried steak on a menu and our server said it was quite popular. No doubt. I skipped that in the interest of my waistline, however, and had a hot sandwich instead.

From Woodstock, we returned to Ayr where Heather and Tom departed for Breslau (where they are currently staying with Tom's parents), she in the car and he on his bike. Sandy and I returned to Cambridge for the evening.