Every fall in recent years, the Freedom Riders have planned a fall colour run. We don't usually get a large turnout because we leave it late enough in the season that it is pretty cold. Or raining. Or both. But that's OK because those of us who go always remember it.

President Rob decided that today would be the day. There was no rain in the forecast so Leo and I decided we'd go for it. It was +3C at 8:30 when he swung by my place to get me on his pretty red 2002 BMW 1150 RT. Sandy decided to skip this ride and stayed home. As we rode over to the meeting point at the Tim Horton's adjacent to the Canadian Tire on the south side of the city, it started to mist down on us. Have I ever mentioned that the weather man is a disreputable SOB? But we were already rolling and nothing as simple as getting wet in a wind in near freezing temperatures was going to stop us.

Under clouds that almost made it look like it was going to snow, we rolled into Timmy's and found Rob, his daughter Sam and VP Dan waiting (inside) for us. Lest we think ourselves too macho, there were four sport bikes there (two of them Hyabusas) piloted by ladies on their way 180 miles south to Barrie. They were well on their way to debugging a malfunctioning set of electric gloves when we pulled out.

Our first leg took us forty miles south to the French River Trading Post, where a stop for hot coffee seemed like a good idea. I had expected the ladies to blow by us somewhere along the way but we didn't see them at all. The Trading Post mascot is the famous Hungry Bear and he just happened to be around so we took advantage and got a group photo. 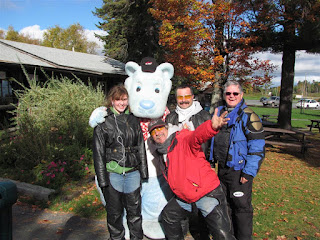 Sam, Dan, Rob & Leo with the Hungry Bear
After warm drinks, we decided we would short cut our Parry Sound destination and head across Highway 522 which started only 10 miles south of where we were. Dan said the road had been recently resurfaced and was in good shape. Rob said Sam wasn't comfortable on his V-Star due to the cold wind and asked if she could ride on the empty back seat on the Wing. No problem. 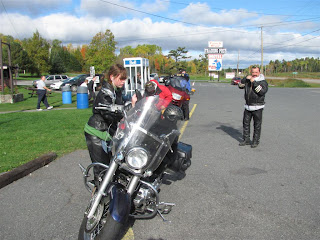 Sam and Rob get geared up at the French River
We headed on south to the turn-off to 522, which is right at the entrance to Grundy Provincial Park. I'm not sure what the current definition of resurfaced is, but the first few miles of light gravel over hard pack didn't seem to fit the description. We motored on, hoping for an improvement and soon we got it. From there to the village of Loring, we rode on old pavement but we made the most of it on the winding road. Then the resurfacing showed its face and we had good pavement through Arnstein to Golden Valley. Unfortunately, we were catching an eastbound rain cloud and so everything was wet. This necessitated a little more care in the corners, not to mention getting our boots wet. The last way to Highway 11, we crossed numerous short gravel patches where they were in the process of replacing culverts.

We arrived in the hamlet of Trout Creek, the eastern terminus of 522, cold and wet. The first place we encountered was TJ's Restaurant and Motel and Rob didn't hesitate in pulling in and shutting down.  I settled for a chicken, peameal (aka Canadian or back) bacon and onion sandwich, which perked me up considerably. 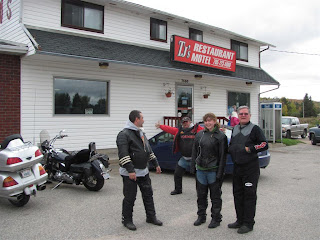 TJ's - Trout Creek Ontario
Coffee'd and fed, we headed north on Highway 11, stopping in North Bay for fuel. Then it was west on Highway 17 to the Tim Horton's in Sturgeon Falls for our final coffee break while a short shower spit down on us again. There were a few classic cars in the packed lot and we admired them while waiting for the liquid sunshine to go somewhere else. 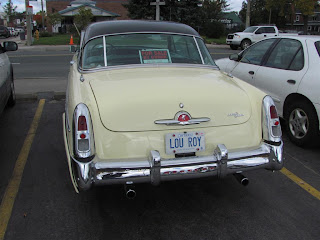 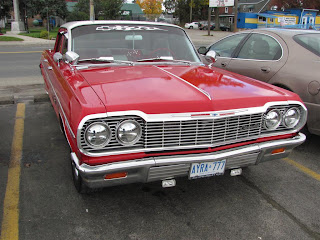 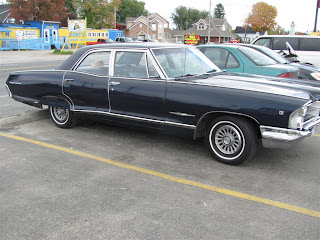 The rest of the ride was uneventful and we were home by 3:00 PM. Not a bad day, all things considered. Too bad more people didn't get out for it.