We pulled into the Earhart Campground and told the gentleman at the gate that we were looking for a tent site. As expected, he told us that it would be $150. This is the price regardless of whether one stays for a week or a single night. A motorhome dry campsite is only $50 more. It may seem pricey for two days but the location is right. We paid, he stuck a sticker on our windshield and a young man on an ATV with a Security shirt and a Glock on his hip guided us to the tent camping area. 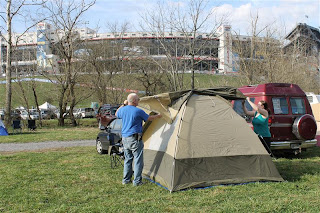 Our tent site in the shadow of the track
As we set up the Coleman 8 x 10 tent (which had only been out of the bag once since we bought the popup camper trailer in 2005), we met a few neighbors including Bo from Maine and Steve and Judy from Rockford, Illinois. It seems Steve and Judy helped retrieve Bo's tent from the creek last night after the storm blew it there. Several mangled EZ-Up awnings attested to the violence of the storm.

Steve told us about the shower building. Clean bathrooms, hot water and as many uses as you wanted for $20. After setting up, we walked over and bought the armbands. They also have coffee and honey buns, which will be good in the morning. 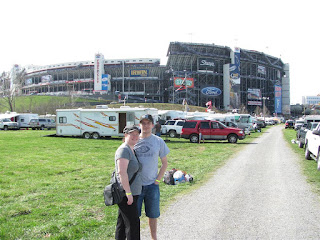 Heather and Tom with shower armbands 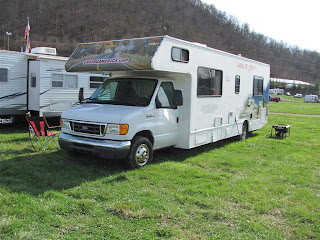 Our motorhome used to look like this
It cost $5.00 to get in to the track for the Friday practice and Sprint Cup qualifying but, because Richard was a season ticket holder and loaned us his iBelong cards, we only paid $3.00 each. The seating was restricted to certain areas so we found spots near the start/finish line and watched Sprint Cup and Nationwide practices. 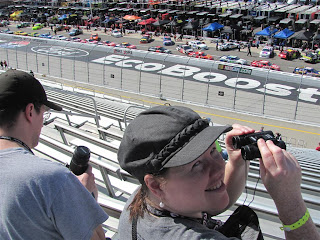 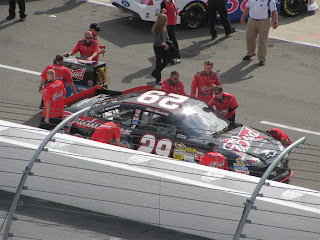 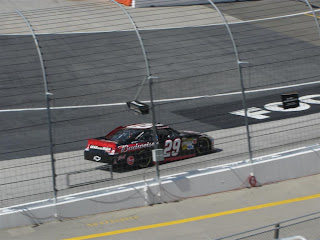 And on the track
We took a drive between practice and qualifying looking for lunch. We ended up at an Arby's in Blountville where the food was as expected. We met a couple of Tennessee State Troopers who were enjoying a nice day riding their Harleys. 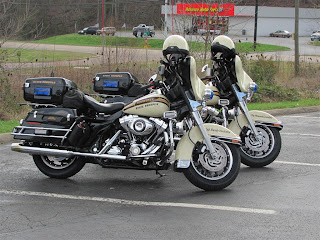 Nice looking bikes - the troopers were smiling
Back at the track, we watched Greg Biffle (one of my B choice drivers for the Yahoo Fantasy League) take the pole and get me ten points. Then we wandered back to the campsite where Steve introduced us to a popular game known locally as Cornhole. The name brought something totally different to mind for me. I played Steve, Tom played Steve and then Tom played Heather. It looks like we are going to have to acquire a game. 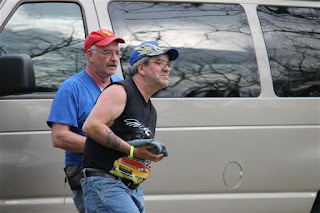 Steve and I throwing the beanbags 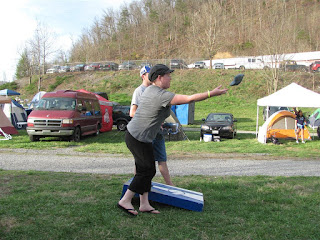 Heather tosses a beanbag in a Cornhole match with Tom 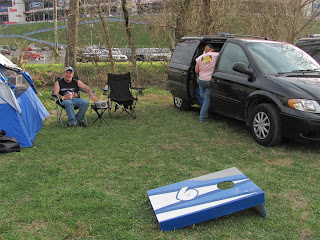 Steve, Judy and their old Mark Martin Cornhole board 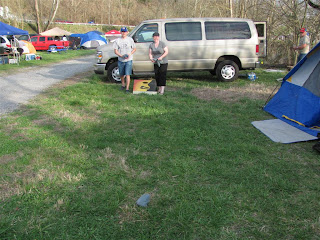 That looks like a long way
We went out again to Walmart where electronics manager Mitch went out of his way to get me set up with a Tracfone LG410G for $19.99. It featured Bluetooth and a lifetime double minutes bonus. He went through the whole process of getting it registered. I added 200 minutes, doubled to 400, for another $30.00. This will really cut my cell phone bill down. Then we drove around looking for a place for supper and ended up at Applebee's. As usual, the food was great.

The cell phone wouldn't call Canada yet. The manual said that it could take up to 48 hours for this to work, so I sent Sandy the phone number via Email and she called me. It was good to hear her voice.  She sounded like she didn't like being home alone any more than I liked traveling without her.

Back at the track, we got some night photos of the track. Tom's new Canon T3 DSLR did a much better job than my little SX120. Then we walked up to the front of the campground where there was a free concert underway. 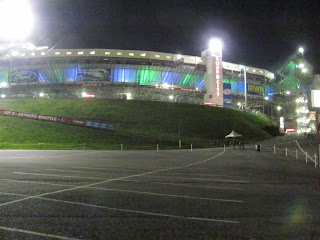 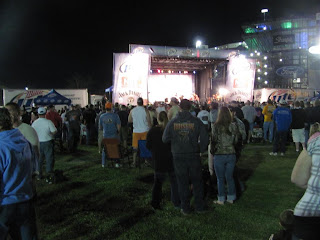 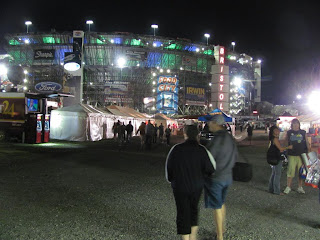 Heather and Tom among some 'unofficial' souvenir tents
As we got ready to go back to the tent, it started raining. We had an umbrella but it was back at the campsite so we hid out under one of the unused EZ-Ups until it eased up. Then it was back to the tent and bed. The sound of compressors and loud talk didn't keep me awake for too long. 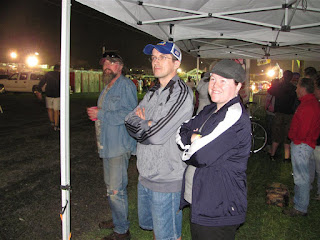