It started raining about 4:00 AM this morning. This was our main concern because, with Heather and Tom's work schedule, there was no way we would be able to stay over another day in case of a rain out. I didn't see any water coming into the tent so I went back to sleep.

It was still coming down at 8:00 AM when we got up and drove over to the shower building. I skipped the shower, just brushing my teeth and washing. I discovered the little bottle of hotel shampoo had lost its lid so my trusty old shaving kit was pretty messed up inside. Nothing o do about it until I got home. Outside, I waited for Heather and Tom with the same crew from Maine that was here yesterday. 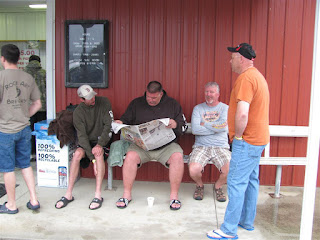 Mainers hanging out in the rain at the showers
We had planned to tear the tent down later, after the dew dried. We were pretty sure nothing was going to dry now but we were hoping for the rain to stop so we put on our disposable Walmart rain ponchos and headed for the iBelong Reunion over at the Creekside Hospitality Area (wherever that was). Following the creek, we found the Reunion, held for the season ticket holders. As I mentioned, Richard had loaned me his iBelong ID cards so we got in for free. 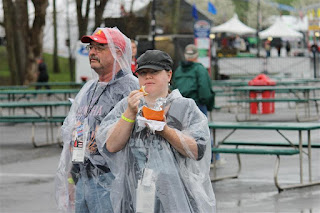 Eating some breakfast at the Reunion
They had some things laid out for the regulars. There was a Little Bristol track with radio control cars. They sure could take a beating. There was a bank of driving simulators and a tire changing simulator that Tom tried out. I skipped that one because my knees would have rebelled. There were a few classic muscle cars, two of which were from Ontario. Brad Keselowski spoke to us, with a lot of commentary directed to Twitter and cell phones in race cars. Jeff Burton also put in an appearance. And we got to see Twiggy the Water Skiing Squirrel. Actually, Twiggy VII and Twiggy VIII because this show has been going since 1979. 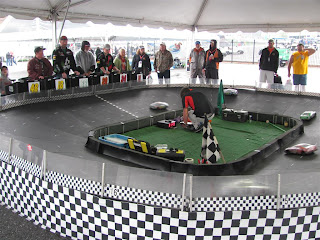 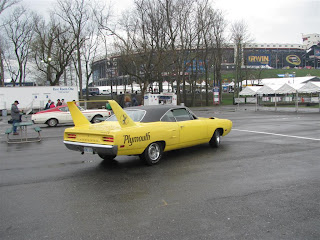 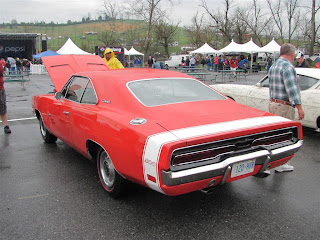 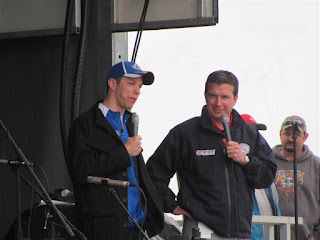 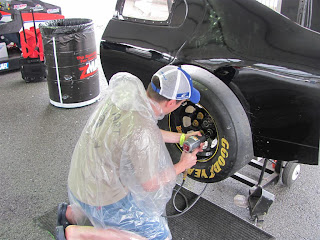 Tom tries out for a position on a pit crew 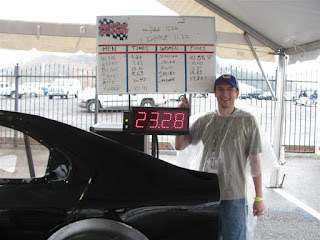 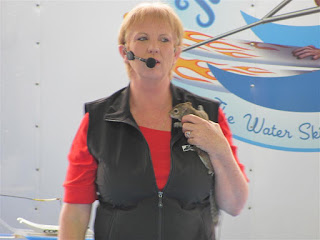 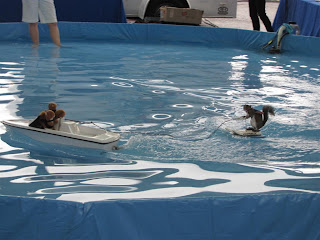 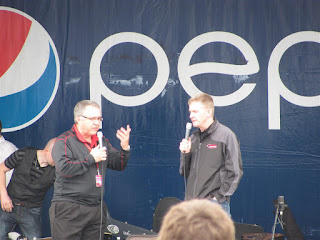 Jeff Burton
On the way back to the tent, we passed the Official Cornhole Tournament. OK, these guys were good. 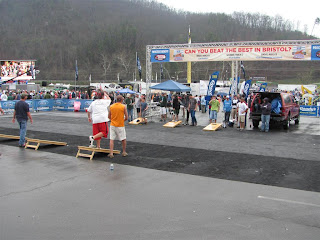 The Cornhole professionals
Back at the tent, the rain had pretty much let up. We stowed the gear and folded a very wet tent and fly. These would need to be hung up to dry when I got home. I hate putting away wet gear but at least it wasn't actively precipitating as we did it. We managed to get everything shoe horned into the trunk and back seat, turning the car in anticipation of a quick escape after the race. 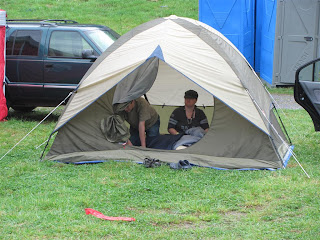 Heather and Tom packing their stuff
We walked over to the track and slowly climbed all the way up to the top level and our Row 57 seats. Sandy said Kellie Pickler was supposed to be doing the pre-race show but we found out later that they had cancelled it due to the rain. Lee Greenwood traditionally sings Proud To Be An American but they had to use a recording this time because Lee was also a weather no show. As we ate pizza and Arby's while watching driver introductions (Kyle got booed again) and opening ceremonies, the skies started to clear. 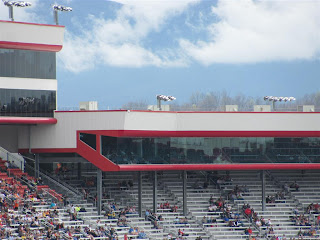 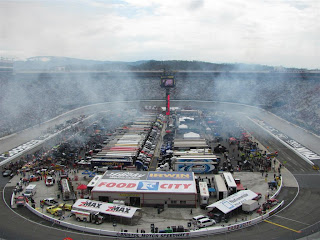 Smoke from the opening ceremonies fireworks 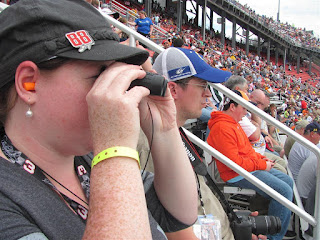 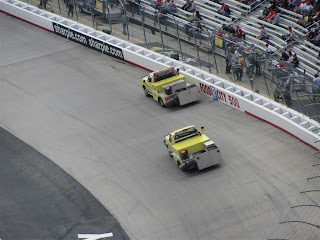 Jet dryers, where is Juan Montoya? 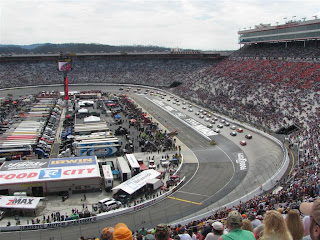 Pace laps and many empty seats
About the empty seats. Bristol has long been the most popular track on the NASCAR circuit and traditionally sells out. Season's tickets are passed to family members in their wills. And today almost 1/3rd of the seats were empty. Discussion afterwards debated the suspected causes including the morning rain, the general state of the economy and possible the new track configuration which makes for less aggressive racing. I'm not sure what the right answer is but it sure was unusual to see.

I'm sure the scalpers took a beating this weekend. They hang out just off the track property and, to a man, all the ones I saw were African-American. In fact, they were almost the only black people I saw near the track. I see the same thing in VROC. Although we welcome everyone and anyone with any evident racial bias gets dealt with quite harshly, we still end up being an almost totally lily-white group. It makes me wonder why.

The last bit of context has to do with the VROC Yahoo NASCAR Fantasy League. We have been doing this for years and both Mom and I have been season champions early on. I haven't done so well lately and today was no exception. I pinned my front line hopes on Kyle Busch, who has swept a whole weekend here in the recent past. But today, my choice jinxed him and he was caught up in the first wreck right in front of our seats.

The rest of the race was extremely uneventful considering this was Bristol. Dale Earnhardt used to describe racing here as "frammin' and jammin' ". But the new track results in more than one racing line and we saw three wide a few times. I fought nodding off again as the cars ran round and round.  In the end, Brad Keselowski crossed the finish line first. 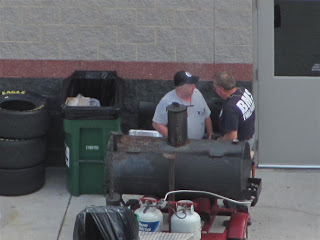 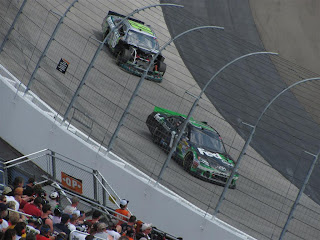 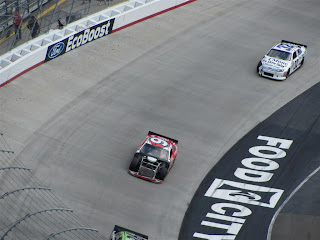 Marcus Ambrose in Bristol trim as well
As soon as the 500th lap was done and the checkered flag waved, we started for the stairs. By the time we got to the bottom, we were surrounded by a sea of humanity all trying to get out of there. We walked quickly to the campsite where I got behind the wheel and we were rolling. I threaded my way around pedestrians but didn't encounter another moving vehicle until we were almost to the main road. Withing five minutes of getting to the car, we were rolling towards town on Volunteer Parkway with almost no other cars on the road. I have never made this clean a getaway from any of the tracks I have been at.
Posted by Jim "Skid" Robinson on 3/18/2012