There was actually a coating of snow on the ground in Woodstock this morning. Not much, but a bit. 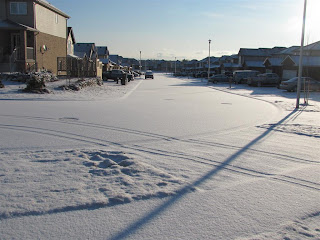 A pristine street, no plows needed
We headed just out of town to Dean Michael's Griddlehouse for breakfast. The restaurant looks like it might have been an old elementary school. They had some interesting breakfast choices. 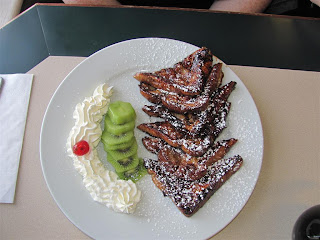 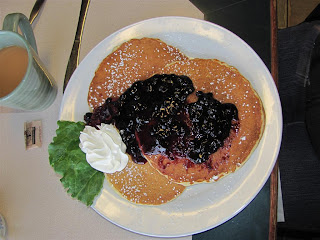 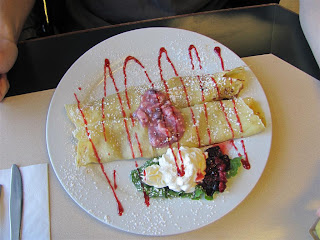 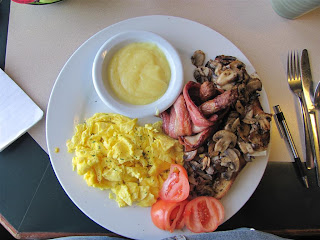 My sausage and 'shrooms
I enjoyed my bacon wrapped sausages and mushroom concoction but, despite the pretty appearance, Sandy found her pancakes too dry and chewy. Pancakes are supposed to be light and fluffy.

We headed out directly from the restaurant. I called our friend Gord, aka The Mighty Stonewall, in Woodbridge (Toronto area) and arranged to meet him for coffee at a Tim Horton's on Weston Road. Traffic was Sunday morning light along the 401 and there was little snow once we left Woodstock. 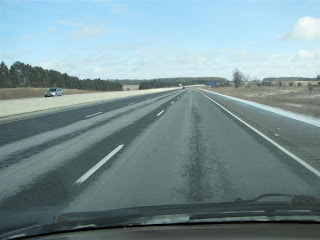 Little snow along the 401
We found the Tim's and were delighted that Gord brought his wife Mary along. She doesn't ride much so we don't see a lot of her but really do enjoy her company when she does show up.

Heading north out of Toronto, Sherm phoned to fill us in on conditions at the Phoenix race track. He and Pat had taken a bus trip from Yuma to see today's NASCAR race. It was nice to hear it was 88F there today while I was getting psyched up to snow blow the driveway when I got home.

We stopped at the Petro-Can south of Parry Sound for fuel and a bathroom break. Snowmobilers were gassing up with huge smiles on their faces. The winter has not been the best for them but this one snowy weekend, all was right in their world. 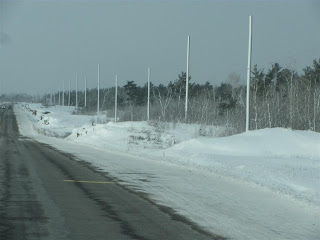 Snow near Magnetawan built up on the side of telephone poles 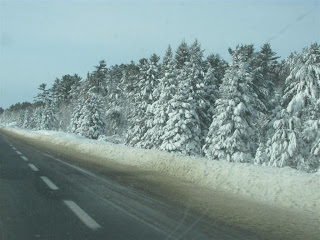 Driving in a winter wonderland
The roads were clear until we hit the four lane from Estaire to Sudbury. This stretch had a lot of packed snow and pressure ice on the surface and required a light touch on the controls. The conditions were indicative of some recent heavy snow. Imagine my happy surprise when I got home and discovered our neighbor Jay had cleared the driveway. All that was left to me was the removal of a little late drifting and some cleaning up the edges. 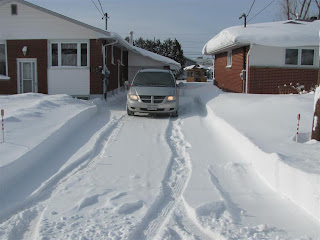 Most of the snow appeared since we left on Friday
We were in time to catch the race in Phoenix on TV but I couldn't see Sherm in the crowd:-))