We awoke at Kim and Mike's to the pitter-patter of little grandchildren feet. A check of the morning news showed another early tornado outbreak all across the southeast. On the north end of that system, Sudbury got the first major snowfall of the year. Our neighbor Andrea posted some photos on Facebook, including one which showed the south side of our house. 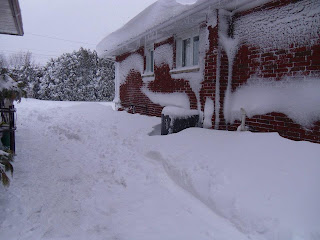 Not bad for one night of snow back home
Photo by Andrea
We spent the day playing with little folk and visiting. Sandy and I may have gotten Kim hooked on a new TV series we have been watching, an ABC preview of the new Spark network program Switched at Birth. Heather and Tom came over to spend the day, too. 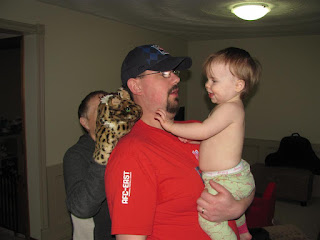 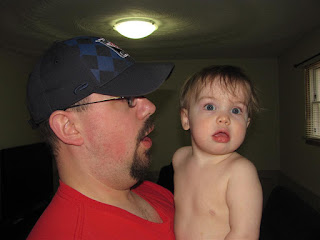 What???
Part way through the day, Mike headed to the Source (formerly Radio Shack) to get a cable to hook his Blackberry Playbook to the HDTV. I went along, asking about satellite radios and finding they only carried Sirius. I though I needed XM to get NASCAR but, back at the house, I discovered Sirius was the ticket so I returned and bought one. I'll need to find somewhere warm to install the antenna before I get this up and running.

Kim has been going to Weight Watchers with great success (not that she needed it that much) and cooked a lunch of chicken mole from her recipe book. It was quite tasty and I'm sure it was healthy as well. 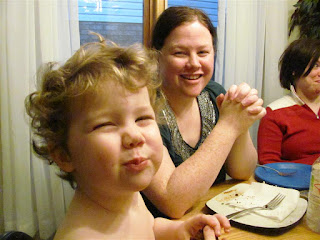 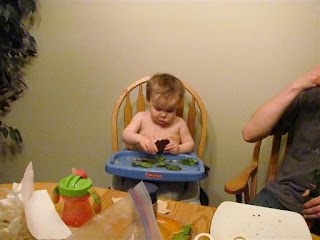 Robyn tucked right in as well 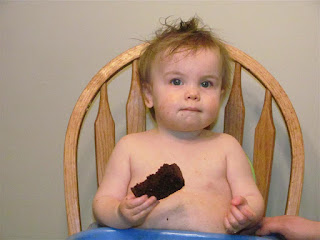 Healthy cake, too
Tom told me that his job with an international bakery company had him doing business with a shop in Solvang, California, the site of our Aebleskiver Rally last June. I asked who and he told me it was Paula's Pancake House. Without breaking into song, it just proves that it is a small world after all since Paula's was across the street from our motel and we ate several awesome breakfasts there.

Later in the day, we headed for Heather and Tom's in Woodstock. Tom played a couple of episodes of a cable TV series called Top Shot through his PS3. It was a show about marksmen competing with a wide variety of weapons. My interest was split between the program and the fact he played it through the video game platform. I need to explore my own PS3 some more. He gave me three seasons of the show as well, uploaded to my computer.