So here we were yesterday afternoon, cruising away from the track and into Bristol on the Volunteer Parkway with hardly any other cars around. But we were aware that there was a tsunami of traffic that would be right behind us so we didn't slow down. As Satchel Paige once said. "Don't look back, something might be gaining on you".  The GPS was set to take us to I-75, although we had one miscue when it tried to take a longer route than I wanted. No problem, we managed to leave Bristol on US 421 North  after instructing it.

Our decision not to take I-81 due to the bridge construction at Marion might not have been necessary since we were so fast getting away, but we heard on the radio that there was a crash on 81 just north of Abingdon, Virginia so I guess our choice was for the best.

US 421 to Gate City was an excellent motorcycle road. It twisted and wound and, once we left the city, there was no one ahead of us. After Gate City, it was more four lane than two and, although the traffic picked up, it wasn't a problem. Instead of taking a northwestern diagonal to meet I-75 at London, Kentucky, the Garmin directing us more southwest on US 58 to Cumberland Gap, Tennessee. This is the spot where Tennessee, Kentucky and Virginia come together and was a major point in the people migrating west to the frontier. There we turned north on US 25E into Kentucky. As soon as we started on 25E, we went through a tunnel that had interactive over height warning signs. First time I have seen those.

We reached I-75 at Corbin, Kentucky where we stopped for fuel ($3.58 per gallon, the best so far) and had a bite at the DQ Brazier. I had an excellent mushroom/Swiss burger. Many of the people in there were heading home from the race.

Tom took over driving in Corbin as the sun was going down. I dozed off and on as we worked our way north. Just outside Dayton, Ohio, we met some heavy rain but the Rocket Stick hooked me up and showed it was very localized. By the time we got through the never-ending Dayton construction, it was all over. Then we encountered fog entering Michigan, stopping at a TOA in Monroe for more fuel and coffee.

Finding the tunnel in Detroit would have been virtually impossible without the GPS. Once we got to it, getting through it was pretty convoluted, too. And the toll was $4.50 Canadian but only $4.00 US. What a rip. We used my US credit card to pay the lower fare. Canadian Customs was friendly, efficient and non-demanding, welcoming us home. Tom had driven all the way from Corbin and now Heather took over for an hour through heavy fog. Tom took over again in London and we pulled into their driveway in Woodstock at 6:00 AM.

I could have taken a break and slept for a few hours but I wasn't feeling too bad so I headed right out. After calculating that our 100 KPH pace had cost substantial time on the way home (20 KPH faster over 10 hours equals 200 kilometers more distance covered), I left town flying low as the fog dissipated. I was moving with the faster traffic at 125 to 135 as the sun started to rise. I even opted to splurge on the ETR407 Toll Road, which got me headed north out of Toronto before the big rush hour jam. Good thing because I heard Highway 25 was closed at Nobleton due to a wreck. I hit the drive-thru at the King City Service Center Tim Horton's and kept going. North of Barrie, I was back into fog but the traffic was light. 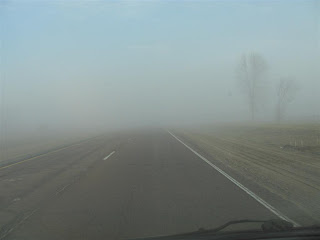 More stinking fog
I had been hearing a light clunk in the right rear that sounded like rocks bouncing into the wheel well. But always the same wheel? I finally stopped in Point Au Baril to check on it and found that I had been dragging my computer power cord since Woodstock. The end that plugged into the Netbook was toast. I'd need to stop at Staples in Sudbury and look for another cord. Damn. 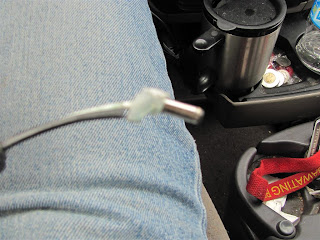 Mangled Netbook power cord
The fog cleared by Parry Sound until I reached the four-lane at Estaire. From there until town, the tired caught up with me. I decided that this was just a little too much and, next time, I will pull over sooner. My ability to push my limits is not as great as it was when I was younger. I reached town at 11:00 AM and, after a quick stop at Staples for a new cord, pulled into the driveway. As expected, there was only a tiny patch of snow left.

I did consider the next Bristol trip. Ideally, we would take the motorhome and camp at Earhart for nine nights for the fixed $200 price. We would spend the early part of the week exploring the area and then, on Friday, we would pay $5.00 each to watch qualifying and practice. We would experience the ambiance, the tailgates and the cornhole tournaments. Then, on Saturday and Sunday, we would sit in the motorhome and watch the races on satellite TV while listening to the track through the windows. Comfortable couch versus metal seats, instant replays and commentary and a place to nap. It just doesn't get any better than this:-))

Wow that's some daytrip! A good day for us is 2 to 3 hundred miles, then we like ti stop for a week. Sound like a good time at the races.

Forced by the kids' schedule. I've been inspired by your writings to slow down:-))