This tale actually starts yesterday, the Ides of March and father-in-law Harry's 88th birthday. This is race weekend at Bristol Motor Speedway in Tennessee and I bought three tickets from Richard, someone I know from Boardwalk Bingo. He is a Bristol season ticket holder but they won't be going until the August night race. Heather and Tom wanted to go so only three tickets left Sandy or I out. I offered to stay home but she noted we would be tenting and elected to let me go.

A quick word about the weather. All the snow we got ten days ago is pretty much gone and we are experienceing exceptionally warm temperatures. I wouldn't be surprised if it all is gone by the time I get back on Monday. Last night while volunteering at the Bingo hall, I saw a group of about 15 sport bikes ride by. Inconceivable, as Vizzini would say. 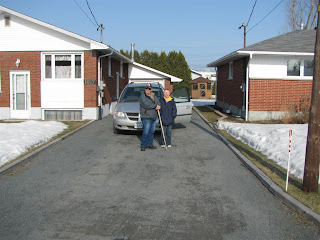 Neighbor Kent and Sandy standing in our clear driveway
I spent a lot of time yesterday trying to update the maps on my Garmin Zumo 550 GPS. In their infinite wisdom, Garmin is now creating North America maps that exceed the internal memory of the unit. Last year, I learned how to install the maps on the external SD card. This time, I tried to do the same but the upgrade failed. I finally installed just eastern North America after fighting with it most of the day. I will revisit it again later but, for now, the GPS won't go bananas when I get to the rerouted highways between here and Parry Sound.

After fueling the van and getting food from Timmy's, I was on the road just before 11:00 AM. The weather was great and the traffic was light. The new GPS map was a bit off at the Killarney Highway turn-off but was right on the money around Parry Sound. I left the 400 at King Road and took my new Toronto by-pass to Nobleton and then south on 27 and 427 to the 401. This seems to add about ten minutes by misses a lot of traffic. It will be even better when they finish working on the 401 in Mississauga.

I arrived at Heather and Tom's just after 4:00. Not remembering their security codes, I just sat on the front porch in my T-shirt and did some browsing on the Netbook. When Tom got home, he asked if I could pick Heather up at work and then get her car from the shop while he went to the bank for US cash. Heather's new office is not far from the house and I got to meet her new boss. The car was at the shop because Tom took it to work this morning when he dropped the Hyundai off to have a broken wheel stud (snapped while changing out snow tires) replaced. 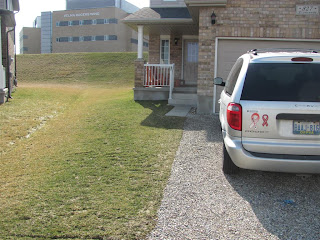 Green grass in Woodstock
We left Woodstock in the Hyundai just after 6:00 PM with Tom at the wheel. We followed the 403 to the Queen Elizabeth Way east of Hamilton and then headed for Fort Erire/Buffalo. There was a quick pit stop in St. Catherines for bathrooms and McDonald's supper to go. 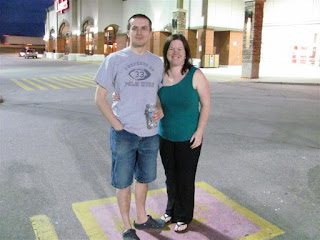 St. Catherines mall with McDonald's (note the shorts in March)
We crossed the Peace Bridge and found no line at the booths. I steeled myself for the usual hassle as I tried to explain I was not the same James Robinson on the wanted list. Instead, Tom handed over their passports and my NEXUS card, answered a couple of questions about where we were going and took the documents back as we were sent on our way. Not so much as a raised eyebrow. Maybe they caught the guy?

As we headed west on I-90, we started to get reports of severe storms in southern Michigan. I used the Rogers Rocket Stick to access the weather radar on my Netbook and saw that we might be able to get to Erie and turn south on I-79 before encountering the system. We stopped briefly at Walmart in Erie to see if I coulld get a US Pay-As-You-Go phone (cheaper than my Bell Digital North America package) but the night shift kid working electronics didn't know the details and wasn't about to find out. Back in the car, we were southbound just before the storm, which had brought twisters to Dexter, Michigan, arrived.

We fueled and I took over driving in Meadville, Pennsylvania. Driving south, the radar had shown a second nasty cell hitting Pittsburgh. We caught some rain but slipped by most of this one on the back side. We got coffee and Heather took over the wheel in Waynesburg, just north of the West (By God) Virginia line. Tom took the wheel back in Buckhannon and took us all the way to Wytheville, Virginia through patchy fog. One nice thing was noting that I-77 in Beckley has been repaved. It was bad enough to jar fillings loose the last time I was here so this was a pleasant surprise.

In Wytheville, we stopped at the Travel Center of America and fueled again. The pump wanted our Zip Code so I used the trick I learned last year. The three numbers from my code and 00. Worked like a charm. Then we had the breakfast buffet in the Country Pride restaurant. I shared the Zip technique with a n Ontario tourist lady and it worked for her too. Turns out she was from Brantford but I worked with her husband's cousin in Sudbury for thirty years. Small world yet again.

I drove down I-81 to Abdingdon, Virginia and took my favourite shortcut to the track. I was surprised to see Darter's Store at the corner of US 421 was closed. Some day, I will turn left and follow the eleven miles of twists and turns on 421 (aka The Snake). 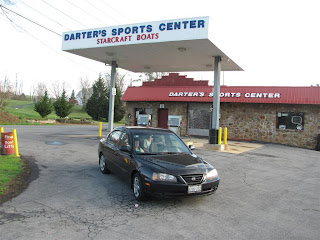 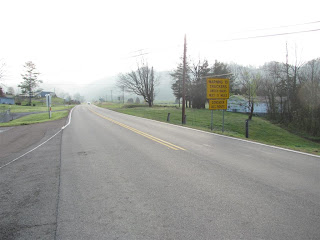 US 421 (The Snake)
We followed 421 to 394 (aka Tennessee Earnie Ford Parkway) and continued to Bristol Motor Sppedway. Turning onto Volunteer Parkway, we passed the front of the track and arrived at the adjacent Earhart Campground just after 9:00 AM.