The breaker on the pole didn't trip overnight so Wilson moving to the other power source did the trick. Rather than have a big breakfast, Sandy and I went over to Subway and split one of their flatbread breakfast sandwiches. She decided she doesn't like mayo on a breakfast sandwich.

A good sized group set out for the Tunnel of Trees but it is north of Petoskey, a pretty good hike, and we have been there numerous times before. Slammer set out to visit some relatives south of here and the rest of us just lazed about. The campground got its traditional soft ice cream machine working, so most of us had at least one cone.

Around 1:00 PM, we mounted an expedition to the Cherry Hut in Beulah, a few miles past Honor. Roseman led the charge as we thundered (or whooshed in the case of the GoldWing) along US 31. Arriving at the Cherry Hut, we found Bob and Linda waiting for a table for two. They had gone to Leland for breakfast and then on to Fishtown. We upped the request to a table for eleven, which the restaurant quickly put together. Although I was in the mood for a cherry burger, I deferred to the group wishes and had cherry pie a la mode and coffee. Bob and I were the only coffee drinkers and agreed that the coffee had a tea taste to it. Sandy and Linda tried it and didn't agree but did say it tasted unusual. But the pie and ice cream were excellent. 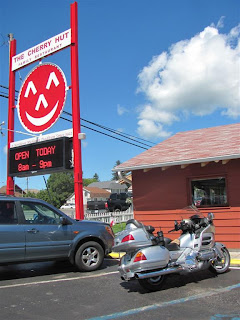 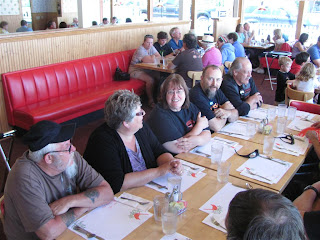 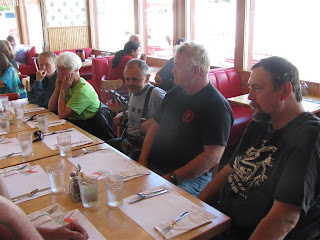 After pie, Scotty, Marlene, Sandy and I decided to ride around Crystal Lake. We went through Beulah and took a road by the shore past some very nice homes and cottages. The plan was to ride over to M 115 when this road ran out but I overshot. The road turned to gravel and then made a left and went up a hill. The GPS said it went to 115 but there was a crossroads a short way up and the gravel road ahead was very steep and narrow. Not trusting the GPS at this point, because the road ahead looked like a snowmobile trail, I turned around. Unfortunately, as Marlene reached the intersection, she applied a little too much front brake and over she went. It was a good thing I had her cherry pies in our trunk. We got her upright and then Sandy and I went back down the hill and waited. And waited. Eventually, I walked back up the hill and found Scotty, his turnaround interfered with by a car going  through, had also fallen over. The scuff on his helmet was evidence that it was good he was wearing it. After more comments about how I was trying to kill him, we decided to head straight back to the campground. 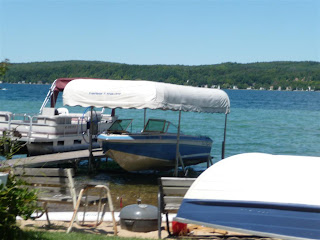 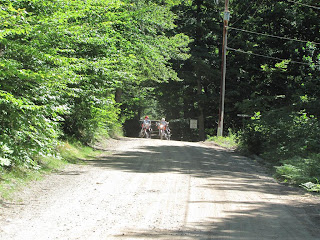 Scotty and Marlene after turning around on the hill 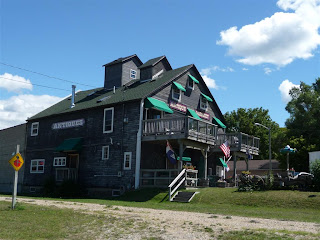 We'll have to browse here some day 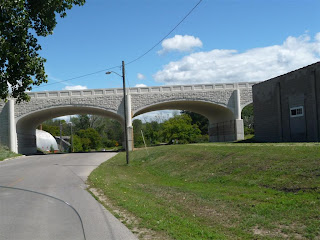 US 31 overpass in Beulah

Back at the campground, Lon's Nomad/sidecar outfit was making strange engine noises. The consensus was that it was a lifter which had bled down. He had towed the camper trailer up behind the outfit while Gail had driven the truck. Their plan was to tow the trailer home behind the truck and get the bike later, but they had a rack attached to the hitch receiver and needed to get it off before they could install the drawbar. It had been there for quite some time and wasn't budging.

The VROC brain trust went to work with penetrating oil and hammers. Once it seemed to start to move a bit, they chained the rack to a tree and drove the truck away. Lucky for everyone, the tree was stronger than the corrosion holding the rack in place and it slid out. 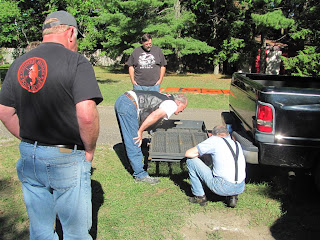 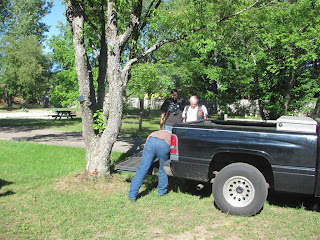 Chaining the rack to the tree 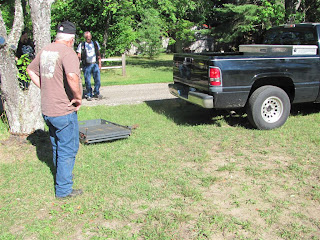 For supper, Furhead said he was going with Rainman and Fireball to Rico's Pizza a few miles east on US 31. Bob, Linda, Sandy and I decided to tag along in the truck. The place was busy but there was a table big enough to seat all of us in the middle of the room. It had a reserved sign on it but the lady said to ignore it. Sandy and I shared a small Hawaiian pizza and I have to say that the crispy golden crust was one of the best I have ever had. I was tempted to order a crust to go.

On the way back, we took a cruise through Interlochen Village and looked at the Interlochen Motel as a possible place to stay next year. Then I fueled the truck so I wouldn't have to worry about this tomorrow. After we got back to the campground, Linda took Sandy to Honor to check out their cabin as another possible alternative. We will need somewhere because the new trailer will be too small to sleep in and Sandy refuses, with good reason, to downgrade to a tent.

Around the fires, there was a universal decision to avoid bottles passing around again. It seems we finished off a lot of alcohol last night and, with packing and traveling tomorrow, there was a desire for a quiet evening. One of the big topics was that we have had three days with no rain. This was very unusual but also very much appreciated. We ended up turning in just after 10:00 PM.

Slammer never did get back, leaving Scotty with his wife.s favourite pot which they had used to boil water for coffee in the morning. Word later was that he stayed until he believed it was too dark to navigate the Lower Peninsula back roads safely, so he stayed over. Scotty will get the pot to him, probably with a little surprise inside. 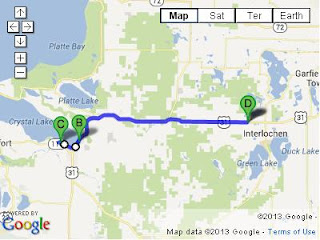